by Cindy (with added notes in GREEN by Lowell)

Back in 2008, the Virginia General Assembly mandated that electric utilities file annually a 15-year plan, called the Integrated Resource Plan (IRP), detailing the expected need for electric energy, and how they will meet that need—what mix of energy sources, the delivery system, as well as what they will do to encourage reductions in demand. Dominion Energy’s 2018 IRP, which is over 230-pages long, can give us some insight into the direction Dominion expects to take Virginia on renewables investment, customer utility rates, and energy legislation [Lowell’s note: “Virginia expects to take” unless voters DEMAND we do a lot better than Dominion’s unacceptable vision for our future!]. It’s a long, dry document that probably very few ordinary citizens will ever read [Lowell’s note: which works to Dominion’s benefit, of course – the fewer people know or understand what they’re doing, the better, from Dominion’s perspective], but I just finished it, so I can give you a summary.

Before I start, let me say that I think by now most of Virginia is aware of the downright frightening, symbiotic relationship between Dominion and Virginia politics. Dominion is one of the largest donors to the system, giving almost equally to both parties. While Dominion is considered a “regulated monopoly,” it’s often unclear whether the legislature is regulating them, or whether (more likely?) Dominion is regulating the legislature. This doesn’t always result in outcomes that harm Virginians, such as when Dominion was at the table helping Governor Northam fight for Medicaid expansion, but we would be foolish to think that Dominion’s influence doesn’t increase the company’s bottom line at the expense of clean air, clean water, and a more sustainable earth.

What follows is a summary of the 2018 Dominion IRP. To keep our reporting transparent, the black text is almost entirely my uneditorialized summary of Dominion’s words. Our editorial comments are added by Lowell in GREEN. Bear in mind that this is a document created BY Dominion, for public consumption [Lowell’s note: for that reason, I’d take everything Dominion says here with not just a grain, but with a veritable pillar of salt!]. Which is not to say that anything is necessarily untrue in it, but that Dominion has almost certainly slanted the information in a way that makes the outcomes – the legislative outcomes in particular – that the company desires look optimal.

In writing the plan, Dominion compares its current energy capacity with predictions about future energy needs of residential and non-residential customers. There’s a complicated econometric model to predict future energy needs, based on the expected population and economic growth in Virginia, and other variables. There are a lot of uncertainties here, but the bottom line is that Dominion expects future demand for energy to far exceed current capacity. (Capacity falling short by 5,500 MW, a little over 20% of total capacity.) [Lowell’s note: I spent years at the U.S. Energy Information Administration involved in energy analysis and modeling, and one thing I know for sure is that the outputs of a model depend heavily on a) the inputs – “garbage in/garbage out”; b) the modeling parameters and assumptions, both implicit and explicit. In this case, it’s fascinating to me how Dominion future power demand to “far exceed current capacity,” as that’s both HIGHLY self serving to Dominion’s economic bottom line and, I’d argue, deeply irresponsible and dishonest about the enormous potential for energy efficiency gains that could slash power consumption far below what Dominion is forecasting. Of course, given the perverse incentives Dominion faces to produce more and more electricity and NOT to become more efficient, I guess that’s not a surprise, but the Virginia General Assembly should change this ASAP, whether by “decoupling” or by simply mandating that Dominion hit aggressive energy efficiency goals going forward.] 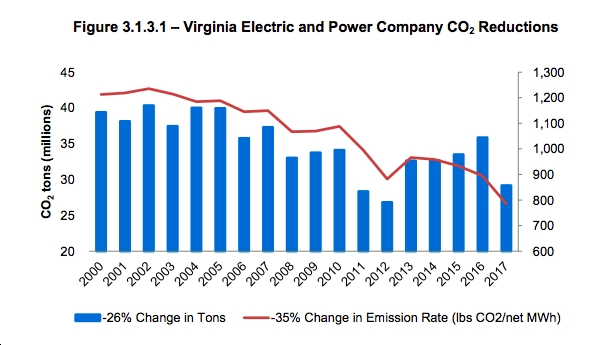 Given the company’s claimed need to meet increasing power demand, Dominion is required to explain to the legislature how the company will either: a) obtain that increased supply through investing in its own new power sources, increasing the efficiency of its current energy sources, or purchasing power from elsewhere; or b) reduce demand through demand-side management (DSM) programs. [Lowell’s note: aggressive DSM measures are just one of the measures that the Virginia General Assembly should require Dominion to pursue – aggressively! Remember, the cheapest – and cleanest – power by far is the power you never have to produce in the first place.]

In figuring which of these methods to use to what extent, there are several things Dominion must consider: 1) rates to consumers, which are once again being overseen by the State Corporation Commission every three years [Lowell’s note: I’ve never been clear to what extent the SCC actually does anything Dominion doesn’t want it to do]; 2) volatility of those rates in response to shocks to energy demand or supply; 3) reliability of delivery of energy source; 4) ease of integrating the change into the current energy grid; and 5) federal and state regulations. [And, not mentioned in the IRP, but obviously relevant, shareholder value.]

There are several regulatory uncertainties right now, making it more difficult to plan into the future. At the federal level, the Trump Administration is (foolishly) working to repeal the 2015 EPA Clean Power Plan (CPP) that mandated reduced carbon emissions from power plants. It’s possible that the administration will replace the CPP with new federal carbon regulation, and/or that the next administration will, but it’s unknown what form that might take, or how it would affect Dominion. Additionally, Virginia could decide to join the Regional Greenhouse Gas Initiative (legislation was introduced last year to join RGGI, but it did not pass), and/or a Virginia RGGI that is currently under review. Broadly, RGGI is a cap-and-trade program that sets a target amount of CO2 emissions and issues tradable allowances for that amount. States with the ability to pollute less can trade on auction their allowance to states that pollute more. Although Virginia has lowered its carbon emissions by 35% since 2000 – largely thanks to switching from coal to natural gas [Lowell’s note: of course, natural gas has its own major environmental problems, including the fact that methane – which leaks in the natural gas production process – is a highly potent greenhouse gas] – it would still be a net consumer of emissions allowances.

The Dominion IRP is really five separate plans at once–one for each possible regulatory outcome. 1) no carbon regulation, 2) Virginia RGGI, 3) Virginia becomes a full member of RGGI, but with restrictions on importing energy from other states, 4) Virginia becomes a full member of RGGI with no restrictions on importing energy, 5) some federal carbon regulation program replaces the Clean Power Plan. For each scenario, the IRP estimates the optimal energy portfolio–what new investments such as renewables to make, what old investments such as coal plants to retire, whether to import energy or to buy carbon emissions allowances from other states in RGGI, etc. given predictions about demand, about technological improvements, and about relative costs of energy sources. And under each scenario, the IRP estimates rates consumers will face. [Lowell’s note: again, keep in mind that this modeling was performed using Dominion’s assumptions, the current legal and regulatory environment that Dominion faces – having largely shaped it through buying up our legislature – in Virginia, etc. So take all of this with the previously mentioned pillar of salt!] 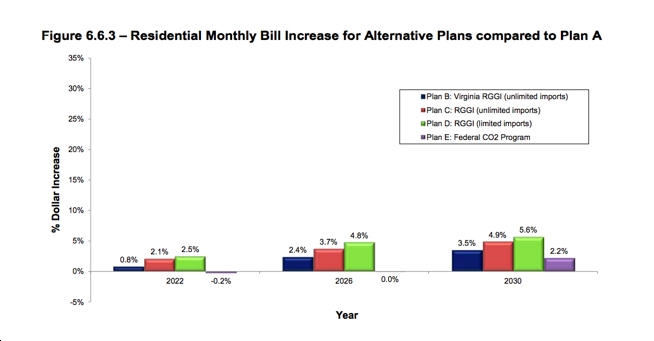 The plans all include retiring (or putting into cold reserve) several aging generators (exact ones to be determined), renewing leases on nuclear stations, completing a power station that is under construction at Greenville and completing very modest solar and offshore wind projects that are currently under construction. Additionally, the plans add 4,480 MW of solar PV and 3,664 MW from eight combustion turbine plants by 2033. Depending on which regulatory environment exists, additional natural gas-fired combustion turbines and/or solar may be added. Additionally, Dominion has extremely small demand-side energy efficiency programs they offer to customers, and the company will continue those into the future.

Although Dominion mentions a (non-mandatory) goal for increasing renewables up to 15% of sales by 2025, the IRP declares many obstacles to common renewables. Dominion claims, for instance, that Virginia does not have sufficient inland wind power resources to support a large amount of onshore wind power. Virginia has great potential for offshore wind, but Dominion believes that it would be expensive to install and maintain. [Lowell’s note: European and other countries have somehow figured out that offshore wind power is increasingly becoming less expensive and are building it rapidly; same thing with several Atlantic Coast states, other than Dominion-ruled Virginia of course, which are also proceeding rapidly to develop their enormous offshore wind power capacity.] Dominion further claims that solar produces “intermittent energy that is subject to sudden changes in generation output and to voltage inconsistencies,” making it hard to incorporate large amounts of solar into the current grid without affecting service reliability. [Lowell’s note: again, Dominion completely ignores the fact that a bunch of U.S. states and countries around the world are EASILY integrating huge amounts of solar power into their existing power grids WITHOUT affecting service reliability. The plummeting cost of energy storage will only make this easier every year that goes by. But for some strange reason, Dominion chooses to ignore all this. Gee, could it possibly have anything to do with the fact that Dominion’s core business model relies heavily on building out more natural gas infrastructure, given the perverse incentives it faces thanks to Virginia’s absurd legislative and regulatory regime when it comes to our power sector?]

In summary, Dominion is required to meet Virginia’s power needs with reliable energy, at a low and consistent cost, following all federal and state regulations. The IRP attempts to plan the mix of energy sources and delivery given a whole host of assumptions [Lowell’s note: many of which are HIGHLY dubious and/or self serving] about consumer and business demand, energy prices, technology, and regulatory uncertainties. It’s a really complicated process to make these forecasts, and a lot of research (almost certainly self-serving) goes into it. At the end of the day though, there isn’t currently a whole lot of legislation on the books – although the General Assembly certainly COULD pass such legislation – to either force Dominion to lower its carbon emissions, switch to renewables, or really encourage demand side improvements. And it’s clear from the report that Dominion can find a way around proposed legislation that doesn’t protect our environment any better nor reduce rates to consumers. [Lowell’s note: we need to DEMAND that our legislature change the laws governing Dominion and/or open Virginia up to real competition in the power sector. That includes, by the way, allowing “consumers” to become PROSUMERS, for instance by having strong incentives to upgrade their homes’ and businesses’ energy efficiency, by putting solar panels on their roofs, installing geothermal heat pump systems, etc, etc.]