Dave Brat does truly seem to be smitten.  His devotion to Donald Trump is…touching.    In the face of all the evidence of Trump’s wrongdoing, Brat sticks to his man.  Blind love.

Brat does say that he loves all people, so I suppose it’s in keeping with his attachment to Judeo-Christian values (he did, after all, go to seminary, as he constantly reminds us) that he should also love this one person in particular, however flawed – and work so hard to defend him.

And it’s also in keeping with his high ethical standards (he taught ethics for 20 years, as he constantly reminds us) that Brat should spend so much time with his House Freedom Caucus pals cooking up ways to impede, deride, or derail the Mueller investigation.  After all, love and loyalty are virtues, right?

Given Brat’s alt-right paved rise to glory – very likely the blueprint for Trump’s – and his hob-nobbing with Erik Prince, Dana Rohrabacher, and Oliver North, it’s hardly surprising that he should take this tack.  Recall that Prince is Betsy DeVos’s brother 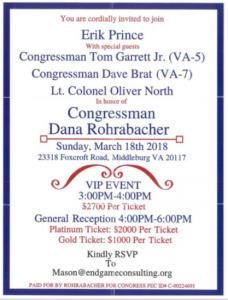 and has come under scrutiny in the Mueller investigation. The DeVos family and their close business associates have donated over $45,000 to Brat; indeed, Brat attended Hope College at the same time as Daniel DeVos’s partner, Scott Wierda, and they had the same major.  Rohrabacher is also being investigated by Mueller for his well-known ties to Russia.  North is now president of the NRA, which may have been laundering rubles.

Still, it may surprise readers to see the time and energy Brat has devoted to protecting his beloved rather than, say, working for his constituents or meeting with them.

June 16, 2017:  Brat calls the Mueller probe “fishy” and claims we need to know of a statute that’s been violated before we investigate to….see whether a statute has been violated.  Guess they don’t teach about “probable cause” in seminary (but doesn’t he even watch Law and Order???). 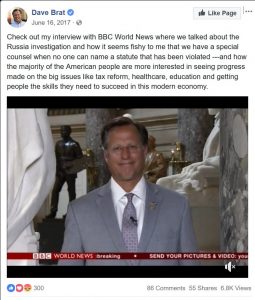 July 26, 2017, Brat co-sponsors H. Res. 477, which seeks the appointment of a special counsel to “investigate misconduct”  between Loretta Lynch and James Comey with regard to “mishandling of classified data and use of an unauthorized email server.”  The counsel was also to look into “[a]ny collusion between former FBI Director James B. Comey and special counsel Robert Mueller” and any knowledge Comey may have had of surveillance of Donald Trump or of the “unmasking” of any individuals connected with Trump’s campaign or transition team.

On the same day, Brat makes a speech in Congress in support of his old pal Jeff Sessions (who had been a main architect of Brat’s victory against Eric Cantor, even lending him his then chief strategist, Stephen Miller).

Brat, in an Orwellian move, supports Sessions’s decision to recuse himself while blaming Trump’s criticisms of Sessions on “frustration” caused by – in Brat’s view – an unwarranted and politically biassed investigation into Russia’s influence on the election and the hostility of the “fake news” mainstream media.

“Unfortunately, in this city there is very little incentive to do the right thing, especially if you are a Republican….One thing is for sure: when AG Sessions erred on the side of caution by recusing himself, he never could have foreseen the 24/7 full-throated obsession over Russia by the mainstream media. The media’s attacks have only escalated since Trump’s inauguration. Fake news dominates. Anchors now make the news by opinion, instead of reporting objective reality. The President is frustrated with those who have called for his impeachment since day one. Their mission is clear. They refuse to honor the outcome of the election.

“At the same time, President Trump is also frustrated by the fact that Deputy Attorney General Rosenstein rushed to appoint a special counsel. Back in May — and to this day — there remains no publicly-available evidence of any crimes committed. Not only that, but Rosenstein gave Robert Mueller broad investigative authority through the inclusion of a catch-all phrase when authorizing the scope of the investigation. Now, additional doubt has been cast on the independent nature of the investigation through Mueller’s appointment of individuals with clear political bias, including past legal counsel to the Clinton’s and several Democratic donors.” 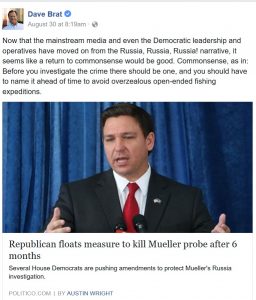 Oct. 13, 2017: Brat signed on to a letter demanding that Mueller and his team be subjected to public oversight hearings.  The letter acknowledges that questions would have to avoid matters related to the investigation.  Huh?  So why have the hearings?  One suspects that the true intent was simply to hold back the investigation by wasting investigators’ time and attempting to intimidate them.

Jan. 19, 2018: Brat signed on to a letter aimed at undermining the Mueller investigation.  It demanded that the House Intelligence Committee release a GOP-authored classified memo (the “Nunes memo”) alleging FBI abuses in obtaining FISA warrants.  Ten days later, the Committee voted along party lines to release the memo and to refuse to release a Democratic memo answering to its allegations.

Jan. 30, 2018: On MSNBC, Brat says that James Comey had “stepped down” from his position rather than that Trump had fired him.

Feb. 2, 2018: Brat releases a statement objecting to the use of opposition research on Trump conducted by Fusion GPS (the “Trump-Russia” or “Steele” dossier) as the basis for the FBI and the Department of Justice to obtain a FISA warrant.  Brat is particularly incensed that the dossier was paid for by the DNC and the Clinton campaign; he neglects to note, however, that Fusion GPS was originally hired by Republicans opposed to Trump, with Democrats paying for the same information later as Trump gained ascendancy.  Brat has left out the connections between Fusion GPS and the Republicans many times since, as in the following two instances.

Feb. 28, 2018: Brat signed on to a letter calling for a special counsel to investigate “FISA abuse” and and “how/why the Clinton probe ended and Trump-Russia probe began.”

“There is sufficient evidence that Democratic opposition research was submitted as evidence to a FISA court so that our intelligence community could begin spying on the Trump campaign and American citizens….Mr. Speaker, the script has flipped, and it seems clear it was the Democrats, not Republicans, who abused their power to try to get Clinton elected.”  Congressional Record, April 16, 2018, Volume 164, Number 61, H3335.

April 18, 2018: Brat signed on to a letter calling for the criminal investigation of Comey, Clinton, Lynch, McCabe, and other Obama-era officials involved with the 2016 presidential campaign – basically everyone Trump would put on an enemies list.

May 22, 2018: Brat signed on to H. Res. 907, which calls for the Attorney General to appoint a second special counsel to “investigate misconduct at the Department of Justice and Federal Bureau of Investigation, including an investigation of abuse of the FISA warrant process, how and why the Hillary Clinton probe ended, and how and why the Donald Trump-Russia probe began….” because “of evidence that raises critical concerns about decisions, activities, and inherent bias displayed at the highest levels of the Department of Justice (DOJ) and Federal Bureau of Investigation (FBI) regarding FISA abuse….”

July 27, 2018: The day after the Helsinki summit, in which, let’s recall, Trump expressed greater trust in Putin than in our own intelligence agencies, Brat releases a statement blaming Obama for the debacle:

“The United States should stand unequivocally opposed to a foreign government meddling in our elections in any form or fashion. Unfortunately, for eight years the Obama Administration operated as if Russia was not a major geopolitical threat. Their foreign policy failures emboldened Putin to take aggressive actions around the World and set the stage for where we are today. While we must maintain open diplomatic relations, we should continue to take a tough stance toward Russia and work against their destabilizing actions.” 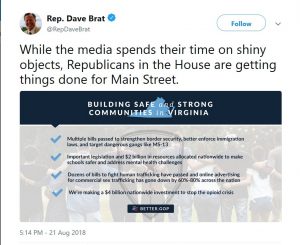 s out this Trumpian-Orwellian tweet.  Speaking of shiny objects….  (Note to Brat:  yes, it’s good to think of Main St., but do note that most of your constituents are not small business owners nor work for them.  LOTS of us work for federal and state governments and for big corporations).

Aug. 24, 2018:  Brat’s pal Sessions is under direct attack from Trump.  Will Brat continue to defend Sessions?  Will he again find some way to blame others for Trump’s abuse of him?

Poor Dave Brat!  On the horns of a dilemma!  Did seminary prepare him for this?  Stay tuned…

In the meanwhile, if Dave Brat has got YOUR goat, then please support his opponent, Abigail Spanberger.  We need a true patriot in office, not someone whose devotion is to a president who is clearly intent on undermining our democracy and ripping apart the fragile fabric of our society.

Please also consider a CONTRIBUTION (even a small one) – or perhaps you can sign up to VOLUNTEER (virtual phone banking is among the options).

Check HERE to see if you live in VA-7.

And please – more than anything:  make sure everyone you know gets out to vote on November 6th!

* Thanks to Kay Littelson for the all-too-true Russian proverb; it was included in an excellent 2016 article she wrote for Blue Virginia on Dave Brat that’s now no longer available.

Audio: On Lou Dobbs’ Podcast This Morning, Donald Trump Said Youngkin Wrote Him a “Beautiful Letter”; Says Youngkin Would NOT Have Won Without Him

Thursday News: “Who is on Biden’s shortlist to replace retiring Justice...