I was busy this afternoon and wasn’t able to watch most of today’s Virginia General Assembly special session on the issue of racially packed House of Delegates districts that have been ordered to be redrawn. However, see below for a link to video from the House of Delegates Privileges and Elections Committee this afternoon, as well as video of House Democratic Leader David Toscano from the House floor. Also, I’ve included some tweets by reporters, plus a statement by Progress Virginia (see below) and one from the Virginia House Democratic Caucus. 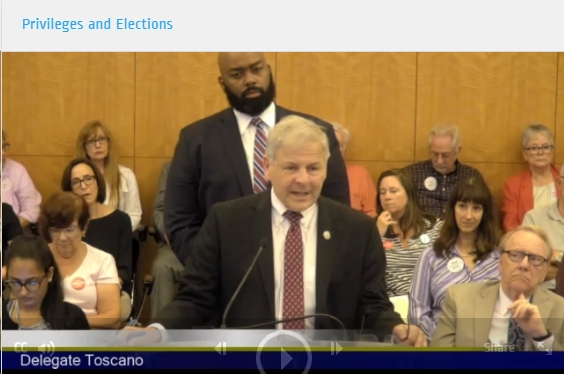 Richmond, VA—Progress Virginia today expressed disappointment in the Virginia General Assembly’s failure to take substantive action today to rectify legislative district boundaries a federal court has found to discriminate against communities of color. The court has set an October 30th deadline for the legislature to finalize a new map to rectify their previous discrimination.

“Disappointingly, partisan politicians today were far more interested in how they could damage each other than working together to rectify how their discriminatory map has damaged communities of color in our commonwealth,” said Progress Virginia executive director Anna Scholl. “Everyone should have an equal voice in our democracy, whether black, brown or white. It shouldn’t take a court order for our elected officials to fix a map that seeks to dilute the voting power of African-Americans. It’s time for conservative politicians to stop playing games and put the voters first.”

House at an Impasse as Republicans Continue to Delay

“Given the Republicans’ lack of action today and over the past several months, it is clear we are at an impasse.

“In the 64 days since a court declared 11 districts to be an unconstitutional racial gerrymander, Republicans have proposed no remedies. Despite requests to Speaker Cox from myself, and a request from the court that action be shown, Republicans have failed to show any movement.

“Today, Republicans had yet another opportunity to propose a map. They did not.

“Today, Republicans had an opportunity to submit amendments to our proposal. They did not.

“They also had an oppportunity to schedule public hearings and set a day to reconvene. Again, they did not.

“The Republicans’ cross-examination today was a thinly-veiled attempt to protect at all costs their seats held by politically motivated racial gerrymandering. At the end of the day, we still have an unconstitutional map and no remedies from Republicans.”