See below for the new polling results from the End Citizens United PAC. Also note that this poll follows yesterday’s Monmouth poll, which also had Spanberger up 5 points in the “full voter sample” model, and 3 points in the “Democratic surge” model. So…extremist Dave Brat’s definitely on the ropes, but it most certainly ain’t over ’til it’s over, so let’s make sure we “run through the tape,” to use yet another political cliche, and win this thing!

Poll shows candidates tied at 47% each

Brat’s favorable rating and job rating are below 50%, a warning for any incumbent

Washington, DC — A new poll of likely voters, commissioned by End Citizens United (ECU) and conducted by Normington Petts, shows a neck-and-neck race in VA-07 between Abigail Spanberger and Rep. Dave Brat. The poll shows a tie with both candidates at 47 percent. Click here to see the polling memo.

Beyond the head-to-head, the poll shows troubling signs for Brat on every key metric. His job rating as a member of Congress is just 44 percent positive, and his favorable rating is 38 percent.

“These numbers spell big trouble for Rep. Dave Brat,” said ECU President Tiffany Muller. “Brat’s decision to cozy up to Big Money special interests at the expense of Virginia families is catching up to him. Abigail Spanberger’s reform-focused campaign is winning over voters because they trust her to fight for them, not those with the biggest checks. We’ll continue to get the word out about Abigail and her commitment to putting people first.”

ECU endorsed Spanberger in April, citing her support for reform legislation and commitment to curbing the influence of Big Money special interests in politics. Spanberger, who rejects corporate PAC money, is making reform a major focus of her campaign and has aired several ads that include reform messaging. ECU President Tiffany Muller, along with Rep. John Sarbanes, recently traveled to VA-07 to promote Spanberger’s reform agenda. 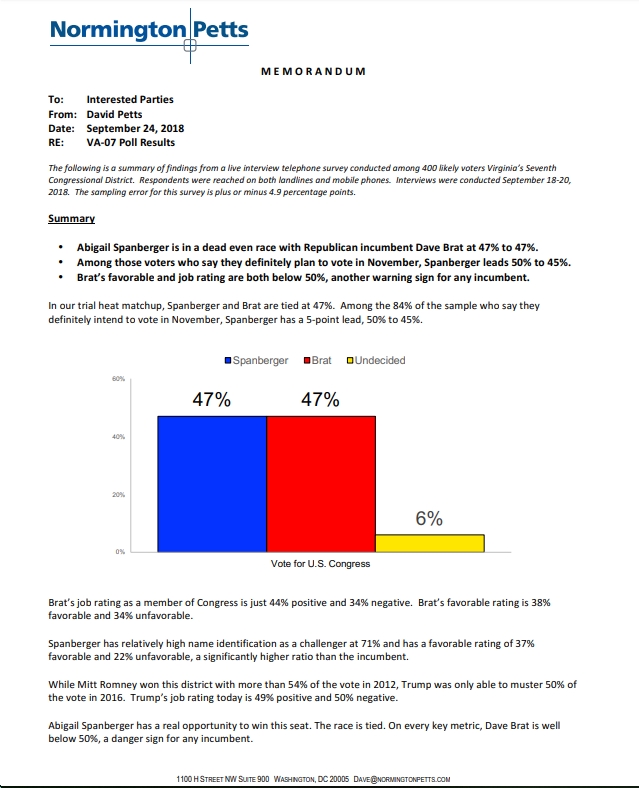