Senator Creigh Deeds is one of the best-known politicians in the Commonwealth. A person who has sacrificed and given more to his state in his almost 30 years as a politician than most give in a lifetime – who has persevered against the unimaginable in a way I never could. Senator Deeds is up for re-election in 2019, along with thirty-nine other members of the Senate of Virginia and all one hundred members of the House of Delegates.

But 2019 could very well see his last election in the 25th Senate District. The 25th curves from the Albemarle County border adjoining Greene and Orange counties, through the entire city of Charlottesville- and then down to Nelson County, over the mountains to Lexington, and up to the West Virginia border. Creigh’s home is in Millboro, Virginia, in Bath County, which isn’t much farther from the capital of West Virginia than it is to Charlottesville. Even if Senator Deeds decides to run again in 2023, it’s an almost certainty that, with a non-partisan redistricting plan in place for 2020, he’ll be drawn into a completely different district- a distinction he shares with a large number of current Senators and Delegates from both parties.

Whatever the 25th Senate district ends up being, it’ll likely be a far cry from what we have now. The Charlottesville and Harrisonburg metropolitan areas contain some of the most gerrymandered legislative districts in the state. In 2015, Republicans won the votes for House of Delegates by a 2:1 margin, and came away with three seats to the Democrats’ one. In 2017, in the exact same districts, over 60,000 people voted for Democrats, while about 45,000 voted for Republicans. Yet we emerged from that election with the exact same makeup as we had previously – three Republican delegates and one Democratic one. Statewide, if I recall correctly, not a single incumbent lost a seat anywhere in 2015.

There was a silver lining to that; in 2017, those Republicans had to spend a combined (and staggering) nearly one million dollars to fight off three insurgent candidates (myself, Brent Finnegan of Harrisonburg, and Angela Lynn of Crozet), who spent less than $240,000 combined. We also organized and almost quadrupled turnout in only two years, paving the road and setting up infrastructure for the future moving forward.

If any of the Republican legislators in the area are faced with having to actually run a competitive election again, in a chamber in which they’ll be in the minority, they’ll retire immediately – bank on it. Which means that between 2021 and 2023, every single incumbent state representative covering the Charlottesville area could leave.

So what does that mean for those of us in the “rest” of the state, outside the crescent of NOVA, Richmond, and Tidewater?

I know many of the legislators from Northern Virginia, from Richmond, from Hampton Roads and Tidewater. I’m friends with them. I fought to make sure we put as many of them in Richmond as we could in 2017. And they fight tirelessly for every single Virginian. I’ll single out Danica Roem here, even though she’s far from unique in this attribute, but she makes it a point to go and seek out people from other districts and other parts of Virginia, because it helps her be a better legislator and understand what’s going on in her own district when she does.

But she, and the other legislators in our caucus, are still looking out for their constituents first and foremost. I don’t blame ’em for that at all; nobody can or should. Their constituents NEED to be their priority. With that in mind, it leaves us here in the Charlottesville area, in the Shenandoah Valley- and, indeed, in the entire western 2/3rds of the state, with one simple fact:

Pull up a VPAP map of donations to last year’s election cycle, and you’ll notice something immediately – the Richmond and Northern Virginia areas are a deep, dark evergreen color, indicating the donation density that those areas command. This makes perfect sense, considering the density of Democratic legislators in those areas.

But there’s another evergreen area, smack dab in the middle of the state, that – if you take out donations from corporations and political PACs, predominantly in the Richmond area – donated more money than anywhere else in the state. Yes, more than Northern Virginia. Yes, more than Richmond. Heck, even if you break it down by zip code and don’t correct for political PACs and corporations, Charlottesville and Albemarle zip codes are in the top three, top five, and top ten places through the last few election cycles.

Here in central Virginia, we’re helping to power the progressive movement in the rest of the state. And now, on the cusp of having non-partisan redistricting be a reality instead of a fantasy, we need to be ready make our mark, and take our place leading the Commonwealth forward.

Right now, Democrats have exactly three House of Delegates districts and two Senate districts west and south of Richmond. The Senate districts were cut in a handshake agreement with Senate Republicans to make sure no incumbents on either side lost. One House district, centered around a location where nothing important has happened since 1998, was drawn to be unwinnable for Democrats; it was won in a dogfight last year by now-Delegate Chris Hurst. The other two were cut specifically to minimize the voices of voters in Charlottesville and Roanoke. In fact, ask the Republicans, and they’ll arrogantly tell you they did Democrats a *favor* in making sure that Delegates David Toscano and Sam Rasoul had seats in the legislature. Ahh, but for the magnanimity of the Republican party they surely would have lost. It’s definitely not that the Republican party is terrified of running in a 50/50 district. No, sir.

But what might we have with actual non-partisan redistricting, where competitive elections are cited as a key attribute for districts to have, instead of protecting incumbents? Well, here’s one map for the House of Delegates that’s been floating around: 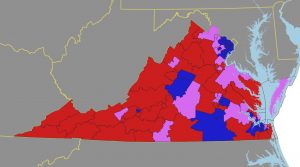 Two Charlottesville-area districts, with two more very competitive- one in the fertile and burgeoning progressive crescent running from Fluvanna to Prince Edward County, and another centered on the place where the best organizing in the state took place in 2017, Harrisonburg.

But that means we have to form coalitions from Scottsville and Nelson County, to Lake Monticello and Farmville. We have to chip in with Harrisonburg, and organize from the rolling hills of Free Union to the winding roads in Free Bridge, and all the way down to Danville. It means we have to find, recruit, and train candidates now who can advocate tirelessly and effectively for people in Charlottesville and Arrington, or Farmville to Buckingham and Troy- for what progressive values mean in both places.

It means we need to help Roanoke and Blacksburg reach back out to the communities around them- the 9th Congressional District used to be a Democratic bulwark in the Commonwealth, what candidates from Henry Howell to Mark Warner used to count on to put them over the edge. And there are a LOT of progressives out there- but we’ll never engage them if we leave those localities to sink or swim on their own.

Frankly, we can’t afford to look inward in any county. Go out into rural Virginia and you’ll hear a repeated refrain: “It’s easy to be a liberal in Charlottesville and Fairfax.” It’s true, and it means we all have to get active about reaching out now– every single candidate and county party in Virginia needs to commit themselves to making sure a map like this is even feasibly possible, and that we’re ready for their implications right now. Some of it’s been happening- Dan Lagana and Fairfax’s “Stronger Tomorrow” push is a great example of it. But it needs to be more; it must be more, especially here in central Virginia; we need to stand up for ourselves and advocate and make sure that the Commonwealth knows that if they want to rely on our progressive strength to push the entire state forward, they need to listen, pay attention to, and stand up for our communities as well.

There are too many challenges coming up ahead for the Commonwealth of Virginia. The Virginia GOP hasn’t been this weak, disorganized, and ineffectual since the 1950s, when they were the liberal party in Virginia, before they started recruiting conservative “Dixiecrats.” We also have hundreds of thousands of voters (and non-voters) who have been turned off by a system that’s been designed to demoralize and inactive the electorate, but now want to be re-engaged, want to fight with us to make the Commonwealth succeed!

We have a once-in-a-generation opportunity to go all out and organize, recruit, train, make inroads, fundraise, and re-engage voters in the Commonwealth at all levels, from school board to President. And we need to not just take it, but push it to the limits of what we can achieve, in every zip code, from Mt. Rogers to Chincoteague, Winchester to Virginia Beach.

We’ll deserve everything we’ll get.