What Donald Trump is proposing re: “birthright citizenship” is obviously, clearly, blatantly unconstitutional. Some people, like Rep. Gerry Connolly (D-VA11) get that simple concept. Others, like neo-Confederate Corey Stewart, do not get that simple concept (or how to spell “cojones” – lol). See below for some reactions to Trump’s latest change-the-subject, bats***-crazy, racist move. Also, I’d say it’s a VERY good rule of thumb that you should vote AGAINST anyone applauding Trump for this and FOR anyone calling him out.

Washington, D.C. – Today, Congressman Gerry Connolly (D-VA), Vice Ranking Member of the House Oversight and Government Reform Committee, sent the following message, along with a copy of the U.S. Constitution, to President Trump in response to his unconstitutional proposal to end birthright citizenship.

“Mr. President, your new Executive Order ending citizenship for children born in the US is patently unconstitutional. I am sending you a copy of the Constitution. Knowing your aversion to reading, I have highlighted the 14th amendment for your convenience. We abide by this sacred text in America.”

Connolly’s tweet regarding his message can be found here. 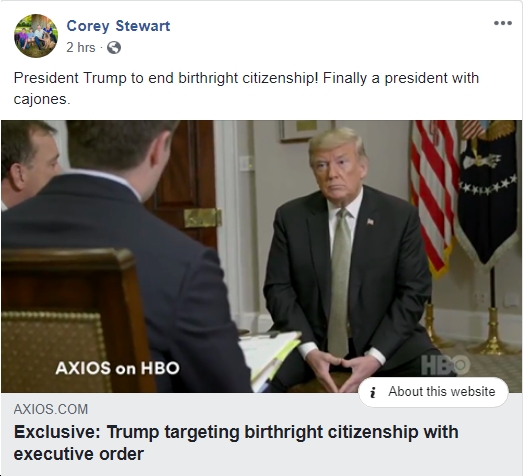 Now, some more reactions. First, Rep. Don Beyer, who totally gets it.

To be clear: This is un-Constitutional under the 14th Amendment. We are a nation of immigrants and we always have been. Trump will never change that. https://t.co/iQcYobhCKh