From a strong supporter of Democrat Elaine Luria for Congress over NRA water-carrier Scott Taylor (R-VA02). 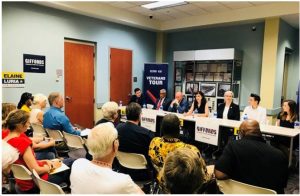 So it should be shocking that Congressman Scott Taylor, when his staff isn’t taking the fifth over forging signatures, is carrying the water for the NRA.  In fact, he accepted $1,000 from the NRA the day after Parkland!  Unfortunately, I’m not shocked anymore by anything Scott Taylor does.

In previous cycles, Democrats have been way too timid on taking on the NRA.  Not so much this cycle.  This past weekend, Take-the-Fifth Taylor’s Democratic opponent Elaine Luria leaned in on the issue, participating in a gun safety round table as part of the Giffords Organization’s and VoteVets’ national Veterans Tour on gun safety. (both organizations have endorsed her)

Elaine is a retired Navy veteran who spent her entire Navy career serving on Naval combat ships and part of a progressive cadre of veterans running all over the country as Democrats.  With her willingness to back better laws to keep her community safe, it’s no surprise that she’s up in the polls.  Looking forward to seeing her win in November.