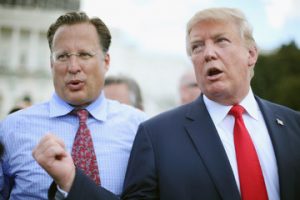 I wrote the following on my blog a week before the 2006 election. Although the names have changed, the tactics haven’t.

‘If you tell a lie big enough and keep repeating it, people will eventually come to believe it.’ So said Joseph Goebbels, the propaganda minister of Nazi Germany. Murray Chotner used the big lie technique to bring us Richard Nixon. Karl Rowe used it to bring us George W. Bush. And now President George and his Republican buddies are using the big lie technique in a desperate attempt to hold on to power for the next two years.

Whether it’s the political ad trumpeting the lie or the stump speech stirring up fear, the one thing the Republicans don’t want the voters to look at is their record over the past six years. The campaign strategy is simple: make the Democrats look so evil that the voters will reelect us even if we have done a terrible job. We have to make the people afraid to vote for a Democrat.

This lie-fear-smear strategy appeals to the most basic of human emotions. It is based on a desire to get people to vote from their gut rather than from their mind. It is based on an elitist mentality that says that the American people aren’t smart enough to deal with issues. It’s based on a suspicion that if the electorate actually voted on the issues, they might vote against our side. Therefore, lie to them, terrify them, cover your opponent with slime. But at all costs, don’t let the voters think.

Obviously in twelve years the issues and the players have changed. But, unfortunately, Republicans are still using the lie, fear and smear technique to keep us the voters from voting on the issues. They use this technique because they think it works. At the polls next Tuesday you need to show them they are wrong.