Earlier today, the news broke that Tyrone Gayle – Press Secretary for Sen. Kamala D. Harris, alumnus of Hillary Clinton’s presidential campaign and Tim Kaine’s U.S. Senate campaign in 2012, and much more – had passed away from cancer at the very young age  of 30 (he graduated from Clemson in 2010).  I didn’t know him personally, but I’ve talked to a couple people today who knew him well and were really shaken and upset by his death. See below for statements from some of the people who knew, admired and clearly loved Tyrone – including Sen. Tim Kaine (who officiated at Tyrone’s wedding just six months ago), President Bill Clinton, Sen. Kamala Harris, former Sen. and Secretary of State Hillary Clinton, former Rep. Tom Perriello, Tim Kaine’s communications director Ian Sams, etc. If you want to contribute to his memorial fund, “to help cover the costs of Tyrone’s outstanding medical bills and memorial arrangements,” please click here. For my part, I will simply express my deepest condolences to all of Tyrone’s family, friends and colleagues, and also my admiration for all that he accomplished in his life. Rest in peace.

P.S. My mind flashed back today to the July 2016 death of Tim Kaine’s Northern Virginia Regional Representative Joe Montano. I still really miss Joe…a unique, original force of nature, as I wrote at the time. Kind of like how people describe Tyrone. 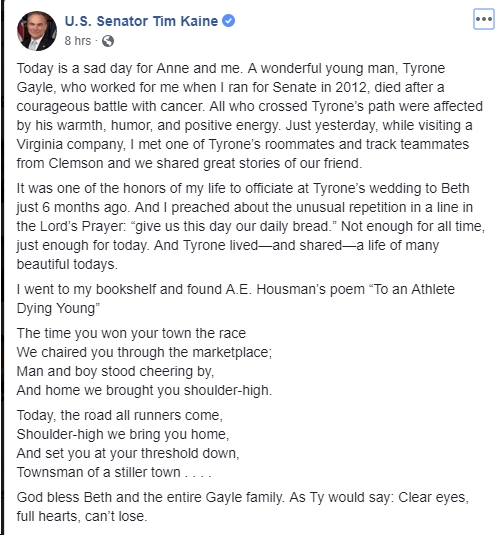 I consider myself fortunate to have spent even a little time with @TyroneGayle. He was an amazing human being, who made the most out of every day and made the world a better place. Count me in as a lifelong member of #GayleNation. https://t.co/SYfSZYSz5v

Measured by any standard but time, @TyroneGayle outlived us all. His unlimited compassion, unwavering commitment to justice and almost childlike sense of joy live on through the vast reaches of #GayleNation that he inspired and animated. https://t.co/VjykIVJpV4

For those who can afford to help, we’re asking for contributions to cover the costs of @TyroneGayle‘s outstanding medical bills & memorial arrangements.

Any remaining money will go to a charitable fund in his honor. Thank you, #GayleNation.https://t.co/kjoyd9JZ8O

Statement from Secretary Clinton on the Passing of Tyrone Gayle pic.twitter.com/qIw24qSXwt

.@SenKamalaHarris pays tribute to @TyroneGayle with the truest statement of all: “Tyrone is irreplaceable.” pic.twitter.com/SB3dTal49J

The world lost a great young man last night. @TyroneGayle was the best of us. Boundless joy. Steely drive and determination. Empathy and compassion. There will forever be a hole in my heart and thousands of hearts (#GayleNation) the size of TG. We love you. Rest easy, brother. pic.twitter.com/hCQbi9ktPQ