I posted last Sunday on absentee voting ballots requested/submitted as of October 4. Now, the Virginia State Board of Elections website has numbers through October 12. Here are a few key points and graphics.

Now, see below for a graph of Virginia absentee ballots by Congressional District (in descending order) as of October 12. 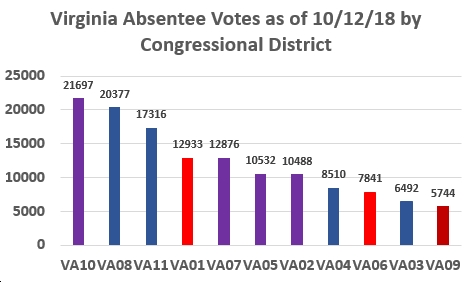 Next, check out the following graph of percent changes in absentee ballots by CD from 10/4 to 10/12. Note that every CD increased by more than 50%, with the biggest increase – albeit from a very low base – in VA09. Overall, nothing’s particularly jumping out at me from this graph… 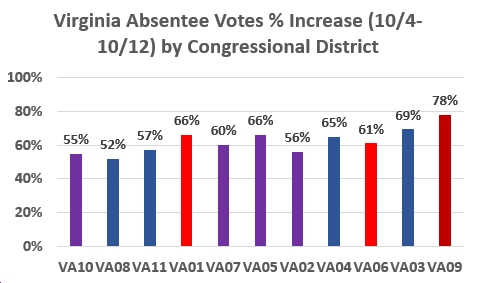 Finally, the next graph shows current absentee ballot numbers (as of 10/12/18) compared to FINAL absentee ballot totals in 2017. As you can see, we’re already far ahead of the pace from 2017, with VA-10 and VA-07 nearly three times their 2017 FINAL numbers. Overall, Virginia has seen more than double the absentee ballots as of 10/12/18 as we saw in 2017 in terms of FINAL numbers. If there’s any correlation between absentee requests and final vote totals, it looks like we’re going to far surpass 2017. But we’ll see… 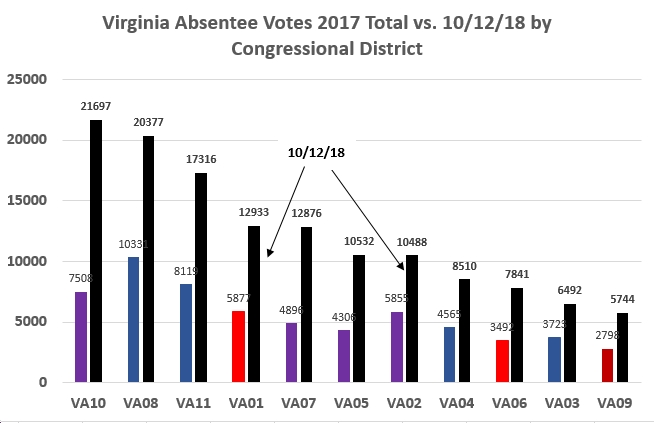