“Rebranding,” by the way, is a reference to the ridiculous Washington Post article (I’m not even going to link to that trash) the other day, which desperately tried to create a (false) “horse race” narrative about Corey Stewart – who has continued to run the promised “vicious,” “ruthless” campaign, hurling wild accusations and smears, continuing to employ this virulent racist and misogynist, etc. – supposedly attempting a “rebrand.” That WaPo story was the corporate media at its worst. In fact, Corey hasn’t changed at all, and yesterday, leaders of Danville demonstrated what they thought of that fact by…walking out. Also, as Danville Vice Mayor Lee Vogler stated after he walked out following Corey’s “kind of bizarre” statements, “He talked about his own county, but the only city he singled out and trashed was Danville.” Yep, that’s Corey Stewart for ya! 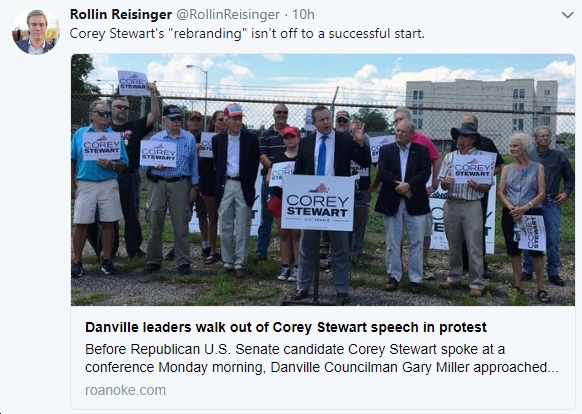