Remember the 2018 Virginia Republican U.S. Senate primary last spring? No? I agree, it’s better forgotten, as it was an ugly cesspool of…well, all the stuff Virginia Republicans do. Like remember this and this, with Corey Stewart mocking “cryin’ Nick Freitas” and defending his campaign’s racist ridicule of Freitas’ last name; with Stewart staffer Thomas Dees accusing Freitas’ wife Tina with calling him the “son of the Devil,” etc., etc.

Now, they’re picking up where they left off back in the spring, with Dees posting on the far-right “Virginia Freedom Caucus” Facebook page that Freitas is “end[ing] a political career in 3 easy steps”…by “refus[ing] to endorse the guy who crushed you, while letting everyone know that you felt entitled to the nomination” (note: neo-Confederate Corey squeaked by Freitas by just 5,000 votes, not exactly “crushed”) and by “remind[ing] everyone close to election day that you still have no plans to endorse the nominee.”

For his part, Freitas argued that it’s a “verifiable lie” that he’s “done nothing” to help the Virginia Republican “ticket” this election, and that people accusing him of doing nothing are simply “trying to place blame for a loss that hasn’t even happened.” Of course, that loss is very likely to happen on Tuesday night, at which point I’ll VERY much be looking forward to neo-Confederate Corey and “cryin’ Nick” getting back to their bloody, mixed-martial-arts pounding of each other. Fun times in the Virginia Republican Party! LOL 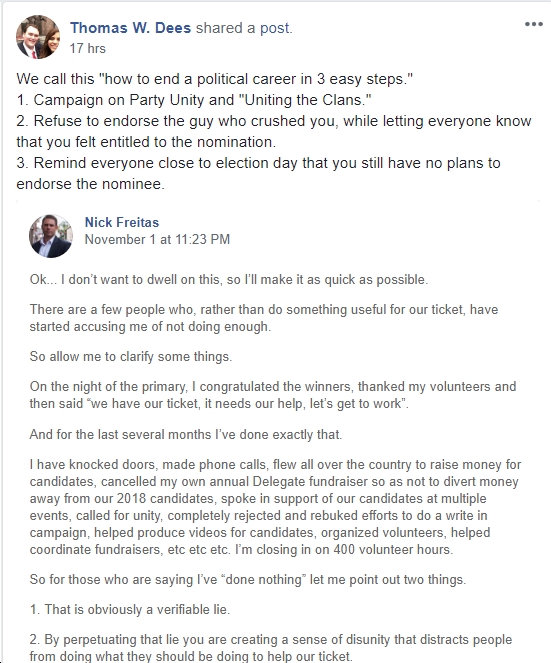