We wrote recently about the Virginia Public Access Project (VPAP) jumping the shark, with its bizarre criteria for including/excluding articles in its morning news clips. Among other absurdities, VPAP added a “requirement that an article present both sides of a debate.” So I guess if an article writes about racism or climate change, for instance, it must also present the other “side” – a racist? a climate science denier? Totally bizarre. Also, note who funds VPAP – Dominion Energy, Appalachian Power, Altria, LoanMax, McGuireWoods (“Virginia’s shadow government”), the corporate media, etc. Finally, note the folks on VPAP’s board – a VP of McGuireWoods, the former chief deputy to Attorney General Ken Cuccinelli, the former executive director of the Virginia Senate Republican Caucus, the Political Director for Middle Resolution PAC (a far-right Virginia PAC), etc.

With that background, check out the following map of Virginia’s 2018 election results, and commentary by VPAP that it supposedly demonstrates how “a relatively small number of densely populated cities and counties play an outsized role in Virginia’s electoral map.” In fact, as a smart/politically astute Facebook friend of mine wrote,

“Uhh, no VPAP, this does not show outsized influence, it shows that localities with more voters have influence in proportion to the number of people who vote there which is how statewide elections work.”

I’d add that actually, in Virginia right now, the party with “outsized influence,” given that it’s lost statewide election after statewide election by huge margins, is the Republican Party – and the parts of the state that support it – which STILL controls the Virginia House of Delegates AND State Senate, despite representing the minority of Virginia voters. So…is VPAP going to do a followup about how rural/red areas have “outsized influence?”  Don’t hold your breath. 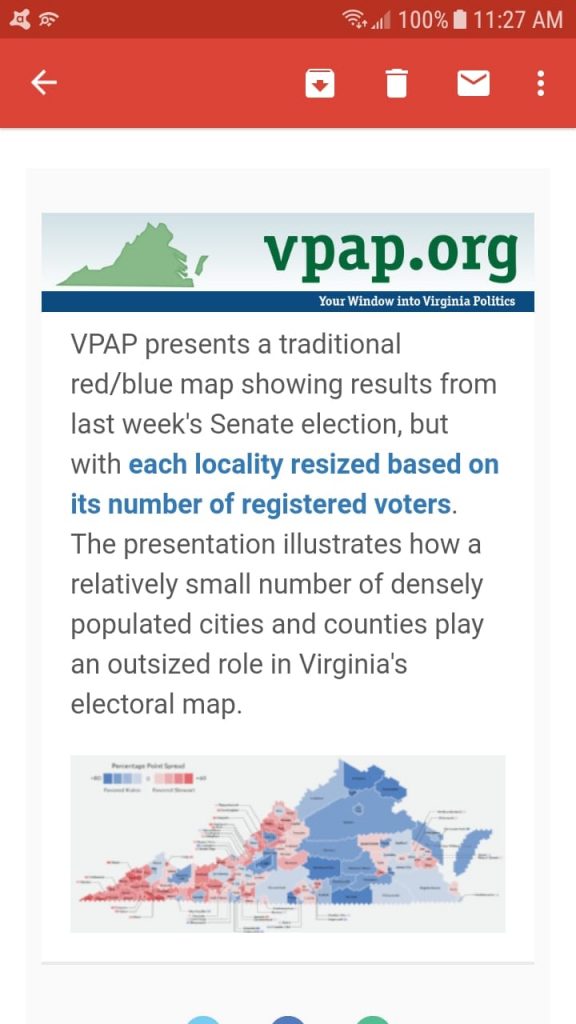 Which tells you all you need to know about the other VA GOP candidates https://bluevirginia.us/2021/04/video-amanda-chase-wonders-what-dems-would-say-if-she-led-a-hypothetical-white-republican-caucus-says-legislative-black-caucus-vice-chair-jennifer-mcclellan-should-stop-being-a-racist#comment-5353854270