I realize that a lot of Virginians think that the Virginia Public Access Project (VPAP) can do no wrong. And yes, VPAP does do some good work, mostly aggregating data from the Virginia State Board of Elections in an easier-to-use format. However – and you just knew there was going to be a “however!” – VPAP also has some fundamental, serious flaws that most people aren’t even aware of.

Second, given VPAP’s sponsors, it’s not very surprising that they have refused to link to independent news sources, such as this one as well as right-wing political “blogs” (although, VERY tellingly, VPAP has periodically linked to a climate-science-denial blog that was, for years, sponsored by Dominion) in their morning news roundup. VPAP’s excuses for refusing to do so have been laughable, on the surface, until you consider who funds them and why those interests – Dominion, etc. – wouldn’t want more attention drawn to articles critical of them at independent outlets like this one.

So now, as you can see below in an email it sent out Friday morning, VPAP has announced a change in its policy for inclusion of news sources, apparently with the sole purpose of including stories by the new, non-corporate-funded (although staffed by former corporate media reporters) Virginia Mercury. I dare you to read this drivel by VPAP and make any sense of it. For starters, VPAP blatantly lies that its goal, “from the start,” has been “to give readers a comprehensive look of [sic] reporting about Virginia government and politics.” Second, VPAP claims, “we want to keep the focus on original news reporting,” yet it excludes a ton of original news reporting while including much that’s repetitive and certainly NOT original.

Third, and most laughable, VPAP has added a “requirement that an article present both sides of a debate.” Yeah, they actually said “both sides,” without any self awareness or irony or anything, as if there actually ARE two “sides” to very issue. I mean, are going to insist that an article on climate change include climate denial? Are they going to insist that an article critical of a powerful Virginia corporation or political figure also includes good stuff about that corporation or political figure? And if so, WHY??? What sense does it make, if let’s say a politician is engaging in corrupt behavior, to insist on that politician’s friends be afforded space in the newspaper to say what a great guy he is? Crazy, really.

Fourth, you’ve gotta love the requirement that “writers should be a commentator or a reporter – but not both,” as if the evolution of the media over the past couple decades hasn’t been towards all types of mixes blending opinion/commentary and “straight news” (whatever THAT is). And, of course, VPAP completely ignores or is clueless about the fact that reporters and the media in general have all kinds of biases, even if those biases are just to present “equivalence” when there isn’t any equivalence or “both sides” when there aren’t two sides. There’s also the selection of what constitutes “news,” which of course reflects all types of value judgments, including the business/financial calculation re: what people will “click” on or what will attract “eyeballs.”

VPAP then announces it has “dropped its prohibition against ‘advocacy’ publications,” which it admits it can’t really define. Yet VPAP frequently links to editorials and other content in the corporate media that are very much “advocating” a certain perspective, political position, candidate, world view, whatever. Yet VPAP also says that what it calls “commentary” will continue to be limited to “legacy print publications,” which is both an antiquated AND utterly nonsensical point of view.

Bottom line: VPAP’s email completely “jumps the shark” – makes no sense whatsoever; is self contradictory, un-self-aware and/or flat-out dishonest; perpetuates one of the worst aspects of the corporate media, which is “both sides-ism”; and generally is just shit-for-brains stupid. 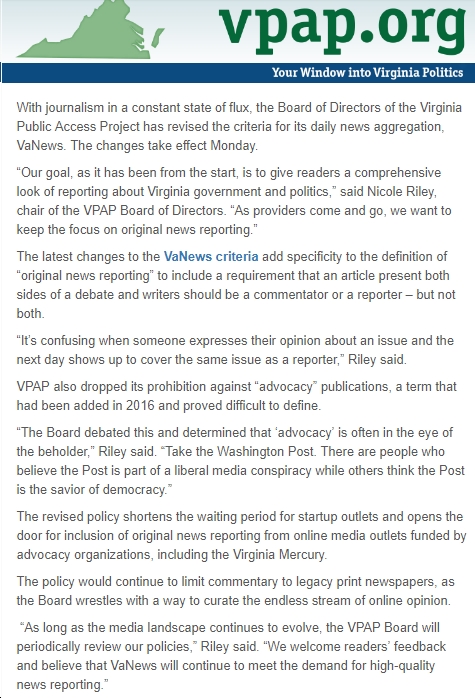 Friday News: “Biden, Back Into the Breach”; “How the both-sides media would cover a successful Trump coup”; “Our Democracy Isn’t Just Going to Fix...

FWIW: 5 Ways the Internet Changed Our Politics [For the Worse] in 2021, Including a “Meta Problem” and “Commonwealth Blues”

There you have it - Youngkin is "Trump in a red vest." Any further questions? Now, treat him accordingly. https://bluevirginia.us/2022/01/audio-glenn-youngkin-rants-about-privilege-bingo-critical-race-theory-teachers-unions-and-teachers-associations-and-the-left-liberals#comment-5707699496