I just saw this news from yesterday:

…Members-Elected Inducted into the Coalition for the 116th Congress…

So, of the three newly elected Democrats from Virginia, all three have joined the “New Democrat Caucus.” They join three incumbent Congressmen from Virginia – Rep. Gerry Connolly (VA-11; the group’s Whip), Rep. Don Beyer (VA-08), and Rep. Donald McEachin (VA-04) – as members of this group, leaving only one Virginia Democratic Congressperson – Bobby Scott (VA-03) – NOT a “New Democrat Caucus” member.

To some extent, I feel the same way about the “New Democrat Coalition” as I do about the “Blue Dogs” – it’s very annoying, absurd and unhelpful “framing” in many ways. For starters, as I wrote about the “Blue Dogs,” the supposed lack of Democrats reaching across the aisle has most certainly NOT been the problem, nor has excessive “partisanship” (whatever that means) on the Democratic side.  But MAYBE the “branding” could be helpful on the margins for a few Dems in “purple” districts? Or, on second thought, maybe it’s not helpful – or it’s even harmful – as the case of former Rep. Glenn Nye (VA-02) demonstrates?

I must say, looking at the New Democrat Coalition’s issues page, I’m not thrilled by some of what’s in there and some of what is NOT in there. For instance, here are a few words I don’t see at all on that page: “climate,” “global warming,” “environment” (other than “regulatory environment” and “right environment for innovation”), “guns,” “LGBT equality,” “voting rights,” “race,” “racism,” “abortion,” “reproductive freedom,” “income inequality,” etc. Very, very strange. In addition to what’s NOT in there – very telling, by the way – there’s a bunch of meaningless pablum and silly slogans, like “A Future That Works.” There’s also some stuff that I *do* see that bugs and/or baffles me, like:

Last but not least, there’s some weird/stupid stuff, like “Comprehensive immigration reform has the potential to reduce the deficit by over $900 billion.” Perhaps they mean the DEBT, not the DEFICIT (which was around $800 billion, last I checked; so comprehensive immigration reform is going to MORE THAN wipe out the $900 billion “deficit,” which probably means “debt?”) – very different things that many (most?) people can’t for the life of them keep straight. This sloppiness is annoying.

Finally, I asked a few Democratic friends what they thought of the “New Democratic Coalition,” and got comments like the following:

So yeah, I’m not a fan, but mostly agree that this group is more a ridiculous anachronism (founded in 1997 “as a congressional affiliate of the avowedly ‘centrist’ Democratic Leadership Council, whose members, including former President Bill Clinton, call themselves ‘New Democrats.'”). As for why so many Virginia Dems are in this group, it’s kind of baffling, although I kinda/sorta see it in “purple” districts like VA-02 (Elaine Luria) and VA-07 (Abigail Spanberger, who also joined the “Blue Dogs”). As for VA-04, VA-08, VA-10 and VA-11? I don’t really get why any of them would see themselves as fitting in or benefiting politically from membership in this caucus…

Thursday News: “Tyrants Around the World Are Rejoicing”; “Trump caused the assault on the Capitol. He must be removed.”; “Trump’s barbarians at the... 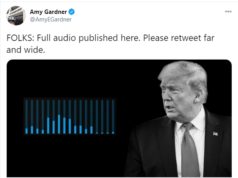 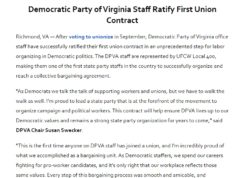