Thursday was the big reveal of One Virginia 2021’s Citizens Constitutional Amendment Drafting Commission proposal for redistricting amendment. For those of you who don’t know, in order to change our current method of drawing districts (where it’s left up to the General Assembly) with a constitutional amendment, a resolution has to pass in the 2019 General Assembly session and then again in the 2020 session, and then Virginia voters have to agree to it in the November 2020 general election.

We’ve seen lots of such proposed resolutions, calling for partisan, bipartisan, nonpartisan, or independent commissions, of various sizes and composition that would draw the lines, under a variety of criterion. One Virginia 2021 has been a big player in this discussion, doing a lot of the advocacy work to bring this issue into the public eye. So when they convened a commission to draft language for a redistricting amendment, it wasn’t surprising–although many in the grassroots community were less than pleased to see right-wing extremist and former Attorney General Ken Cuccinelli on the commission.

Their proposal consists of an “independent” citizen commission consisting of three Republicans, three Democrats, and four Independents, who will draw the maps with public comment encouraged and under a transparent process. The districts must be approximately equal in population, compact and contiguous, respecting political boundaries where possible, not favor or disfavor any political party, incumbent, or individual or entity, and not denying “the ability of substantial racial or ethnic minority communities to elect representatives of their choice.”

Let’s come back later to the issue of whether this can pass the General Assembly–both this year when Republicans hold a slim majority in both chambers, and next year, when….? Before we get to that, I have a few constructive questions/concerns about the details of this plan, recognizing that this is still a work in progress that will go through many more rounds of improvements before making it to the General Assembly for a vote.

First, the selection committee that will choose who sits on the redistricting commission consists of retired judges, four selected by the respective House and Senate party leaders, and a fifth chosen by the other four on the committee.This committee is responsible for determining the application process, for overseeing the advertising of the commission, and ultimately for narrowing down the applicants to a set of 22. While the selection process for these judges may be free from partisan bias, that doesn’t mean the judges will be free from other biases–judges hardly being the most demographically diverse people.

Next, here’s what’s left to the discretion of the General Assembly–determining what consists of a party affiliation for the purposes of choosing Republican, Democratic and Independent citizens. Since we don’t register by party here in Virginia, people can self-identify any way they like. So, what criterion might the General Assembly choose? And, in particular, what does it mean to be an Independent in Virginia? Are those who self-identify as Independents typically conservative or progressive, or somewhere in between? (In my canvassing experiences, people who say at the doors they are Independents are anything but on the VAN records, and very often are recorded as SRs.) Additionally, are there meant to be any restrictions on who can apply or be accepted–such as restricting current or past legislators or their staff from serving, restricting large donors or lobbyists from serving? And the only mention of geographic or demographic diversity are the vague words  “candidates shall be chosen with consideration of Virginia’s diversity.”

After the applicants have been winnowed down to 22 by the selection committee, the four party leaders take turns striking out candidates until the final ten are arrived at. It should be noted both here and above that having smart, strategic party leaders is critical here! Then, with accompanying opportunities for public comment, maps are drawn according to the specified criterion. For a map of districts to be approved, seven of the ten committee members must vote yes, including at least one of each political affiliation. What I’m not seeing anywhere in this proposal is what the Plan B is if they are unable to reach an agreement on a set of maps. Who steps in and draws the maps in that case–a judge, the General Assembly, the Governor?

Finally, if the commission does successfully approve the votes, that’s the end. There is no veto nor amendment allowed by the General Assembly or the Governor. I guess that’s necessary for an independent redistricting commission, but somehow it makes me nervous to know that there’s no recourse if we’ve somehow overlooked something in the creation of the process. If somehow one party or the other (or any other entity) has figured out a way to game the process and draw maps that hurt democracy, we have no recourse. I’m not saying I’d want the General Assembly to be able to just ignore the Independent Commission maps completely, but a process that allows for back and forth discussion might be prudent.

So that’s the plan. It’s got some great features, and in principle takes the legislators out of the drawing of the maps, which makes sense. But it needs a bit of work still too. And it’s not at all clear whether the General Assembly is quite ready to vote themselves largely out of the picture. It should be interesting to watch how this proposal improves as we get closer to session; and even more interesting to watch how this and other proposals fare in the General Assembly this year. Stay tuned! 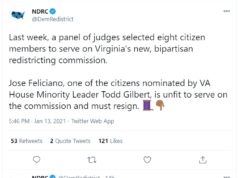