You don’t have to be that old to remember when fishing in Virginia meant searching for a body of water rod and reel in hand. This is changing as, with sea level rise, streets are increasingly flooded with ‘moon tides’ or in storm events where it didn’t occur (or less frequently) in the past.

A few years ago, a(n infamously) famous image came from Miami: an octopus that had come up from a storm drain during a ‘moon tide’ flooding event. Miami is spending $billions for adaptation to rising seas even as this is one of the hardest places in the nation to harden against rising seas due to its geological formation. Norfolk hasn’t seen an octopus (yet) but …

Right up there in terms of risk and difficulty in pursuing the ‘harden’ infrastructure against sea level rise (SLR): coastal Virginia.  With that in mind, it is good that Governor Northam created a Chief Resilience Officer with, in part, responsibility for developing a Coastal Resiliency Plan.

(Let’s be clear, however, about the Northam Administration at this time and the ‘climate math’: it is a one step forward, seven steps back situation in terms of climate mitigation and, therefore, addressing the root causes of the problems rather than simply dealing with symptoms (e.g., SLR and coastal flooding). We (Virginia and beyond) need aggressive action on both (mitigation and adaptation) fronts.) 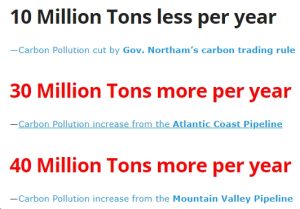 The other day, ABC News ran an excellent piece on the Fourth National Climate Assessment (NCA4): As White House debates validity of climate report, local officials are already at work.  The ‘local officials’ are from coastal Virginia where there has been, for the past decade or more, leading edge work on seeking to coordinate responses between government entities, businesses, non-profits, and others. (On this, see the ODU Resilience page/effort.)

Hampton Roads has already been experiencing some of the worst conditions on the East Coast attributed to climate change, as rising sea levels contribute to worsening flooding and struggling infrastructure.

Residents experience frequent “nuisance flooding” that covers roads, including in some cases the only way in and out of military bases.

In Norfolk it’s no longer unusual to see fish as roadkill, according to Skip Stiles, the executive director of an environmental nonprofit called Wetlands Watch.

Also within the article is a good lay down of how climate-related problems aren’t ‘solely’ due to climate change.

While not necessarily directly “climate mitigation,” investing in infrastructure (updating while repairing stormwater systems) and tackling other problems (such as replenishment of underground aquifers where overuse has accelerated land subsidence) is part of the package of required investments that will help reduce climate impacts while creating jobs and boosting economic activity at the same time.

The time to #ActOnClimate was yesterday. The time to act is today. And, it will be time to act tomorrow. Every moment of delay raises the costs of required action and means that impacts will be greater.

“In Norfolk [VA] it's no longer unusual to see fish as roadkill.”

"We are, yet again, on the first stage of the GOP mass shooting response cycle." - @brianklaas https://bluevirginia.us/2022/07/rep-gerry-connolly-d-va11-the-gun-lobby-and-its-republican-puppets-have-robbed-americans-of-our-sense-of-safety-in-just-about-every-place-imaginable-including-at-fourth-of-july-parades#comment-5907069186