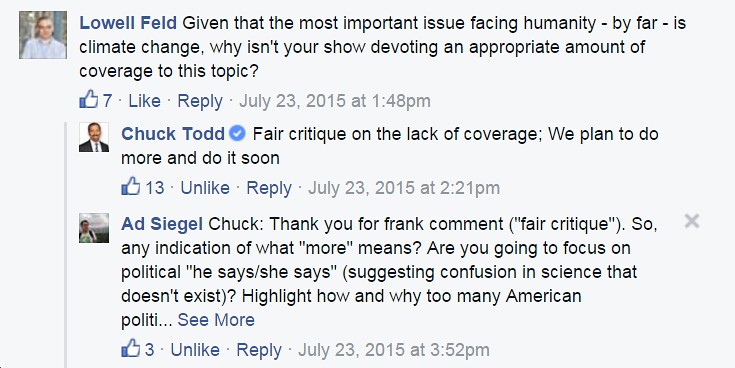 Remember back in July 2015 (see screen shot on the right; click to “embiggen”), when I challenged Meet the Press host Chuck Todd to devote an “appropriate amount of coverage” to the climate crisis, which as I noted is the “most important issue facing humanity – by far” (note: I’d add that broader environmental problems, many of which – loss of biodiversity, for instance – are related to the climate crisis, are also urgent to deal with).

Since then, it’s been 3 1/2 loooong years, and as the climate crisis has gotten even more urgent, we’ve gotten basically nothing  from Chuck Todd. Actually, we’ve gotten WORSE than nothing, including just a few weeks ago, when we got Meet The Press Booking a Denier to Discuss Climate Change Is a Portrait of Our Dangerously Dumb Times. Not that it’s all Chuck Todd’s fault; recall that back in 2014, then-MTP-host David Gregory touted this disgraceful episode: “only on #MTP: Debating Climate change w/ Bill Nye @TheScienceGuy and Vice Chair of Energy & Commerce Cmte @MarshaBlackburn.” My god, no no no no no no no…do not EVER “debate” a scientific fact with anyone, let alone a right-wing climate science denying wacko. Ugh.

Anyway, given Meet the Press’ (and the corporate media’s) horrendously pathetic track record covering the climate crisis, this morning’s Meet the Press show falls into the “better late than never” category, I guess. See below for some video of former New York Mayor Michael Bloomberg and California Mayor Jerry Brown, “both of whom have been on the front lines, dealing with climate change over the last few years,” discussing the climate crisis and what to do about it. Also, good for Chuck Todd to FINALLY – at long last! – state the glaringly obvious:

With that, see below for video of Michael Bloomberg and Jerry Brown. Oh, and one last point which I can’t repeat too frequently: anyone who denies climate science – or any science, really – should have no place as an elected official, at any level, in America today. Nor should their voices be listened to on ANY subject, really, because if they deny or minimize the #1 crisis facing humanity, they lose all credibility on everything else.

P.S. Almost forgot to mention, this week’s show must NOT be a “one-off”; we need this kind of coverage on Meet the Press, NBC, ABC, CBS, CNN, etc, etc. relentlessly, at least until we’ve ramped up to the level of action needed to tackle this crisis.

Michael Bloomberg says: “it would be a lot more helpful if we had a climate champion rather than a climate denier in the White House. You know, I’ve always thought Trump has a right to his opinions, but doesn’t have a right to his own facts. And the truth of the matter is this country and this world is in trouble. The ice caps are melting and the storms are getting greater…I think that any candidate for federal office better darn well have a plan to deal with the problem that the Trump science advisors say could basically end this world.”

Jerry Brown says: “We need more efficient cars. We need all of that. And that’s why this climate change is, is not just adapting. It’s inventing new technology. It’s, instead of complaining about the Chinese putting all their money into batteries and artificial intelligence and new kind of cars, we have to put more money in America. So instead of worrying about tariffs, I’d like to see the president and the Congress invest tens of billions in renewable energy, in more-efficient batteries, to get us off fossil fuel as quickly as we can. I would point to the fact that it took Roosevelt many, many years to get America willing to go into World War II and fight the Nazis. Well, we have an enemy, though different, but perhaps, very much devastating in a similar way. And we’ve got to fight climate change. And the president’s got to lead on that.