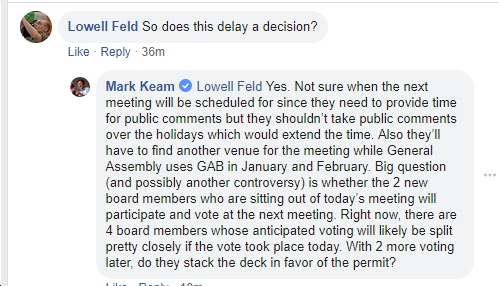 At Air Pollution Control Board, as @VirginiaDEQ staff presents their “findings” on suitability of Union Hill as a site for pipeline compressor, actual residents who will live with the toxic risks demonstrate their disagreement with staff report. #WeAreAllUnionHill pic.twitter.com/Y08amB6Gy2

Union Hill community members Richard Walker and Ruby Laury and others in the air board meeting turn their backs in disagreement with DEQ’s characterization of the environmental justice issues in their community. #WeAreAllUnionHill #noACP @GovernorVA pic.twitter.com/tFRniQbMFa

“I, for one, do not see the advantage of holding (public comment),” air board chairman Richard Langford said. But he’s outnumbered, and the board will hold a public comment period to hear about documents shared after the board’s last meeting

Virginia State Air Pollution Control Board moves (on a vote of 3-1) to accept additional public comments on permit application for compressor station to support Atlantic Coat Pipeline; @VirginiaDEQ received new information since last meeting so they want to consider it first.

UPDATE: The board has returned. The room is silent.

Lots of confusion about why Virginia State Air Pollution Control Board moves to go into close meeting. Are they discussing whether public can provide comments today as requested by stakeholders? Board chair was very unclear about their motion. #WeAreAllUnionHill pic.twitter.com/Yt7DEKYLzJ

Board member Ignacia Moreno makes the motion to go into a closed session, to discuss “consultation with legal council and staff members about probable or potential legal filings.”

First thing the Air Board did is make a motion to go into a closed meeting and now the audience is chanting no, as are people outside waiting to get into the meeting room

The air board is meeting today to consider a permit for the Buckingham compressor station that’s part of the Atlantic Coast Pipeline. Protestors are out in full force. pic.twitter.com/qrExRYXkXS