Just a couple weeks before a crucial vote by the Virginia Air Pollution Control Board on Dominion Energy’s proposed fracked-gas-pipeline compressor station in the historically African-American community of Union Hill, Dominion has ramped up its efforts at winning over opponents to “11” on a 1-10 scale.

See below, for instance, for a letter that Dominion was busy spreading around at a meeting yesterday morning.  The Washington Post reported last night on the letter, writing that “Opponents of a natural gas compressor station planned for a historic African American community expressed surprise Thursday to learn that the state conference of the NAACP has written to the governor in support of some aspects of the project.” The letter, signed by Virginia NAACP President Rev. Kevin Chandler (note: for some reason it says “Chairman” on the letter, but I’m pretty sure his actual title is “President”) says:

“We are satisfied with the progress and efforts Dominion Energy has made to work with the key stakeholders and residents in the Union Hill community…Dominion Energy has committed to a $5.1 million community investment package in the Union Hill community to address long-standing community needs in the areas of emergency response, emergency communications, and community programming…Dominion’s proposal will set a new standard for community engagement in connection with economic and industrial development initiatives. In addition, we are working with Dominion to partner on several other fronts such as STEM workforce development in the minority community and increasing awareness on energy, sustainability and environmental justice issues…We also understand that Dominion Energy s open to additional monitoring requirements, similar to those that would be required in air quality non-attainment areas…”

That would seem to be a significant change for the Virginia NAACP, which in July called for a halt to all construction activity for both the Mountain Valley and Atlantic Coast Pipelines. At that time, the Virginia NAACP stated that “Union Hill, Buckingham County, is a predominately African-American community…Established by freed enslaved people,” that “Union Hill relies on a single-source aquifer for their drinking water,” and that Dominion and DEQ gave “no consideration for pipeline ruptures which could pollute the single source aquifer which feeds the wells of Union Hill and most of Buckingham County.”

Also, on November 16, we reported on a statement by the Virginia NAACP – “Virginia State Conference NAACP Deeply Troubled by Dismissal of Air Pollution Board Members Who Expressed Concern Regarding Environmental Justice.” That statement concluded, “We urge the Governor to reinstate Mr. Bleicher and Ms. Rubin immediately so that the Board can provide an informed and impartial decision that meets the purpose and responsibility of the Board, to protect Virginia’s residents from unnecessary air polluting hazards.”

So…if the Washington Post story is accurate (and there seem to be numerous questions about it), and if this letter is saying what it appears to say, has the Virginia NAACP’s position changed in recent days? Puzzling, so I’ve been trying to figure out what’s going on. This morning, for instance, I ran all this by Jon Sokolow, an attorney, lifetime NAACP member and leader against the Atlantic Coast Pipeline and proposed compressor station in Union Hill. He responded with the following comments:

“The story has Dominion’s fingerprints all over it. And it is clear that it was leaked by Dominion ally/apologist Dick Saslaw and others to create a false impression that the NAACP supports the compressor station. It does not. This is another desperate attempt by Dominion to create fear and confusion. They will fail.”

I also checked with Kenny Boddye, an NAACP member, community leader, candidate for Prince William County Board of Supervisors and passionate pipeline opponent. He responded:

“What we’re seeing here is a blatant attempt by Dominion Energy to co-opt the NAACP into a narrative that benefits their shareholders at the cost of the health and lives of black people. We often talk about how Dominion misinforms legislators, and misdirects them with carrots that look good on paper. They also do this to organizations, and they’re currently trying to do it to one of the longest-standing civil rights organizations in our nation’s history. Let me be abundantly clear – the NAACP will not be used to help exploit the people of Union Hill for the sake of Dominion Energy’s profit margins. We do not support this racist compressor station project.”

I’d also remind everyone that this Wednesday, Gov. Northam dodged excellent questions and follow-ups by WTOP on his highly suspicious dismissals of two Air Pollution Control Board members who were likely “no” votes on the compressor station, just weeks before the vote on 12/10. Also recall that one of the dismissed members, Sam Bleicher, wrote on his Facebook page (note: we broke this story, then other media outlets stole it without credit or attribution, because that’s how they roll),  “Was Dominion Energy involved in the decision? Decide for yourself…all indications are that I was removed because I sounded like I might vote against the Dominion Energy permit.”

Meanwhile, there’s no doubt that Dominion is busy spreading – along with this letter – a LOT of $$$$ around, to try and soften up/win over opposition within Union Hill and elsewhere to its proposed compressor station. And god knows what Dominion’s role might have been in the dismissals of the two Virginia Air Pollution Control Board members who were likely “no” votes on the compressor station.

With that, and as I wait for hopefully more responses – I’ll update this post accordingly if/when I receive them – here’s the letter Dominion Energy was busy handing out at a meeting yesterday morning. Ask yourself, by the way, why Dominion – which badly needs this compressor station for its multi-billion-dollar Atlantic Coast Pipeline boondoggle – would be so motivated to hand out this letter at all. Cui bono? Hmmmm…. 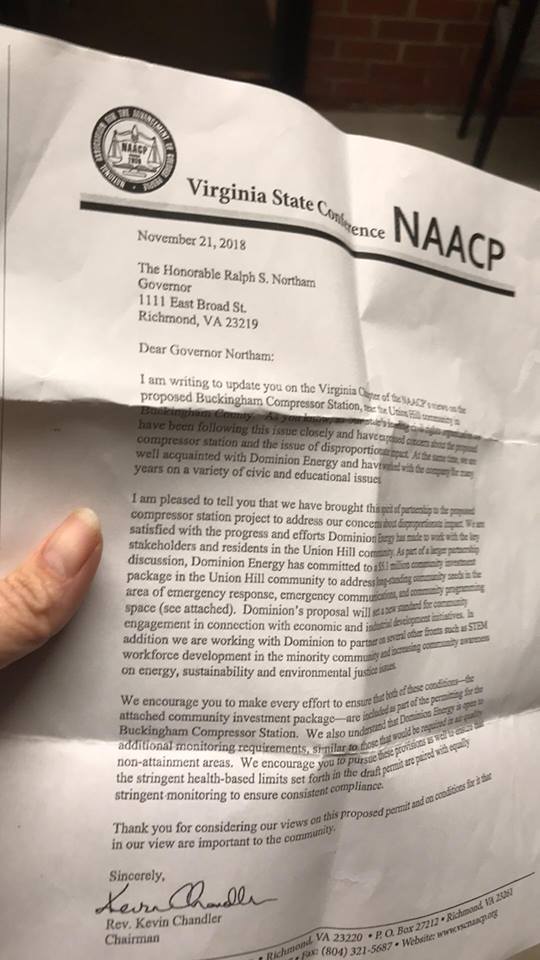