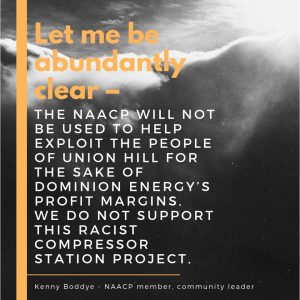 Thursday, a letter surfaced just days before a crucial vote by Virginia’s Air Quality Board which had been signed by Virginia State Conference NAACP President Kevin Chandler in regards to a Fracked Gas Compressor Station project slated for Union Hill in Buckingham County. The letter heavily implied that the statewide civil rights organization had reversed course from a call earlier this year to halt construction on the compressor station and both the Atlantic Coats and Mountain Valley Pipelines.

The Washington Post took the story and ran with it Thursday night, sowing confusion among environmental activists, climate justice advocates, and within the NAACP itself. As a member of the VSC NAACP’s Environmental & Climate Justice Committee, I can tell you that we were just as surprised by the letter and its content as everyone else. For months, we have been working on a campaign to get all of the local NAACP branches in the Commonwealth to sign onto a letter in opposition to the pipelines and the compressor station as a show of solidarity with our brothers and sisters in Union Hill.

We released a clarification letter on Friday reaffirming that our opposition to the compressor station and the environmental injustice it represents. Our position never changed, so what’s with the original letter circulated Thursday?

It comes from a classic strategy employed by Dominion Energy and other utility corporations throughout the country when they face opposition to lucrative projects – they mislead legislators and organization leaders, and then seize the narrative by sending out propaganda. They also infiltrate local organizations to make it seem as if there is no opposition to their projects.

In Mississippi, for example, energy companies sought to buy off NAACP branches with donations to the branches themselves and promised investments to improve the community, all the while pushing along projects that poisoned land, air and water, and seized the property of communities of color. The problem became so acute that National NAACP’s Environmental & Climate Justice Team led a strategy talk in Tunica last year.

President Chandler did indeed sign off on the content of the letter, but only after he was led to believe that it was simply a show of gratitude in regards to improvement projects to air quality, fire & rescue infrastructure Dominion promised to the community of Union Hill should the compressor station be approved. He was also led to believe that the Union Hill community – and its respective NAACP branch – had worked out their differences with Dominion and were no longer in opposition of the compressor station or pipelines. The letter he signed off on obviously implies a much broader approval of the project overall, and both of these representations by Dominion are patently false.

In short, Dominion Energy and their allies almost succeeded in pulling a fast one on one of the largest and longest-standing civil rights organizations in our commonwealth and country. They almost used us as a pawn in a game they’ve played for decades. But here’s the thing – this isn’t some game; people’s lives are at stake.

The community at Union Hill – which has a large population of folks who are direct descendants of Freedmen – will be poisoned by this compressor station. Their land, water and air will be tainted, and that’s just assuming there isn’t any sort of malfunction or explosion. We’ve seen it all over the country; when it comes to fossil fuel pipelines, it’s not a matter of if there’s an explosion, but when.

I will not mince words: these pipelines – and especially the compressor station – are racist projects that perpetuate a long history of environmental racism in Virginia for the purpose of corporate profit. I’m outraged out of principle, but as a descendant of Virginian slaves myself, I take it personally.

The NAACP will not be used to help corporate interests exploit communities of color like Union Hill. Instead, we are completely committed to the following initiatives which reduce our reliance on fossil fuel infrastructure and help lift low income and black communities out of poverty and sickness:

Glenn Youngkin's buddy Ted Cruz continues to be one of the worst people in America. https://bluevirginia.us/2022/07/rep-gerry-connolly-d-va11-the-gun-lobby-and-its-republican-puppets-have-robbed-americans-of-our-sense-of-safety-in-just-about-every-place-imaginable-including-at-fourth-of-july-parades#comment-5907183924

President Biden: "Jill and I are shocked by the senseless gun violence that has yet again brought grief to an American community on this Independence Day...I’m not going to give up fighting the epidemic of gun violence." https://bluevirginia.us/2022/07/rep-gerry-connolly-d-va11-the-gun-lobby-and-its-republican-puppets-have-robbed-americans-of-our-sense-of-safety-in-just-about-every-place-imaginable-including-at-fourth-of-july-parades#comment-5907171460