Virginia elected officials respond to the bats***-crazy “Obamacare” ruling last night by a right-wing, activist judge in Texas. Now, I guess we’ll see what two stolen Supreme Court seats will get Republicans…and how badly they will harm tens of millions of Americans.

“This is devastating news for the tens of millions of Americans who could lose their health care. Americans with a history of cancer, diabetes, heart disease, asthma, an injury, or a whole host of other medical conditions who were protected under the Affordable Care Act are now at risk of losing their insurance. For the sake of all protected under the ACA, an appeals court needs to overturn this decision, and the Trump Administration needs to stop its cruel attacks on our health care.” 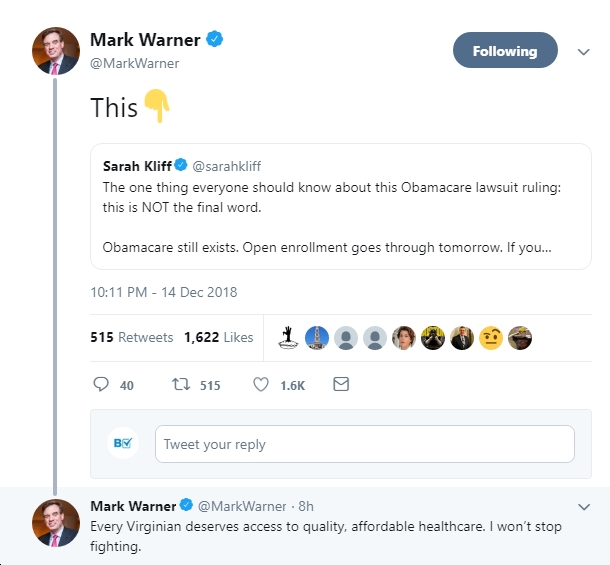 “This reckless court decision endangers the lives of millions of Americans who are going to lose their health care. It is an ideological decision in a case that has no legal merit. Last month’s election results showed how important access to health coverage and protections for pre-existing conditions are for American families. We will take immediate action in the new Congress to intervene in this case and appeal this decision. House Democrats will do whatever it takes to make sure the protections enshrined in the Affordable Care Act endure. The lives and wellbeing of millions of Americans – including those living with pre-existing conditions – are on the line.”

“Until recently, I never thought we would have to use the national defense bill to make clear that the U.S. military shouldn’t be used...