On January 10, we reported on a statement from the Loudoun County Democratic Committee about the proposed Rockwool stone wool insulation manufacturing facility in the eastern panhandle (Jefferson County) of West Virginia. The Loudoun Democrats, along with 33rd House of Delegates candidate Mavis Taintor and Blue Ridge District Supervisor candidate Tia Walbridge, wrote a letter to Virginia’s Attorney General Mark Herring “requesting intervention to protect Loudoun residents and agricultural businesses in Loudoun County from pollution coming from the Rockwool factory in West Virginia.”

As you can see from the screenshots, below (from the Rockwool Ranson Community Faceboo page) that letter was followed by a rapid response (on January 11) by AG Herring. The gist of Herring’s letter was that he “take[s] very seriously any actions that may endanger Virginians, impact their health, or damage their property.” Herring pointed to “the potential significant environmental impacts the [Rockwool] site may have on the Commonwealth of Virginia and its residents”; said it was “difficult for me to understand how you can proceed with building such a facility…without understanding the potential harms to human health, the natural environment, and ultimately to the economy of affected Virginia communities”; and requested that Rockwool provide “as expeditiously as possible…modeling on the downwind dispersion of the hazardous air pollutants” and that Rockwool “revise your plans to include control technology to eliminate HAP-laden particulates that could impact Virginia communities.”

Rockwool responded on January 16, noting that the company had already met with Virginia DEQ Director David Paylor (on November 5, 2018) and had written to Gov. Ralph Northam (on October 5, 2018) “detail[ing] the expected environmental impacts on Loudoun County and the Commonwealth.” Rockwool further noted that it had already included “the dispersion modeling you have requested,” and that this modeling had already been reviewed by Virginia DEQ, which said it was “satisfied that these estimates are well below the legal limits in the U.S. and…Virginia, and significantly below the Ambient Air Concentrations established by” Virginia DEQ.

In short, it appears that AG Herring’s questions had already been answered by Rockwool, to the apparent satisfaction of Virginia’s environmental regulators, 2-3 months before Herring’s sent his January 11 letter. We’ll see if there’s any more followup from AG Herring on this, although I’m not sure what that would be at this point. Anyway, we’ll keep an eye on it, as clearly many people are interested in this story.

P.S. Just to put things in perspective, I’d remind everyone that the two fracked-gas pipelines being built in Virginia will emit orders of magnitude more greenhouse gases – including both CO2 and the highly potent greenhouse gas, methane, which is released in the fracking process – and other pollutants than the Rockwool facility will. One estimate is that the Atlantic Coast Pipeline (ACP) and Mountain Valley Pipeline (MVP), combined, “would together contribute as much greenhouse gas pollution as 45 coal-fired power plants — some 158 million metric tons a year.” That compares to just 153 thousand tons of CO2 from the Rockwool facility – one thousandth (0.1%) the greenhouse gas emissions of the ACP and MVP.  Just a reminder that we really need to stop those pipelines, as they’re both environmentally disastrous and economically nonsensical. 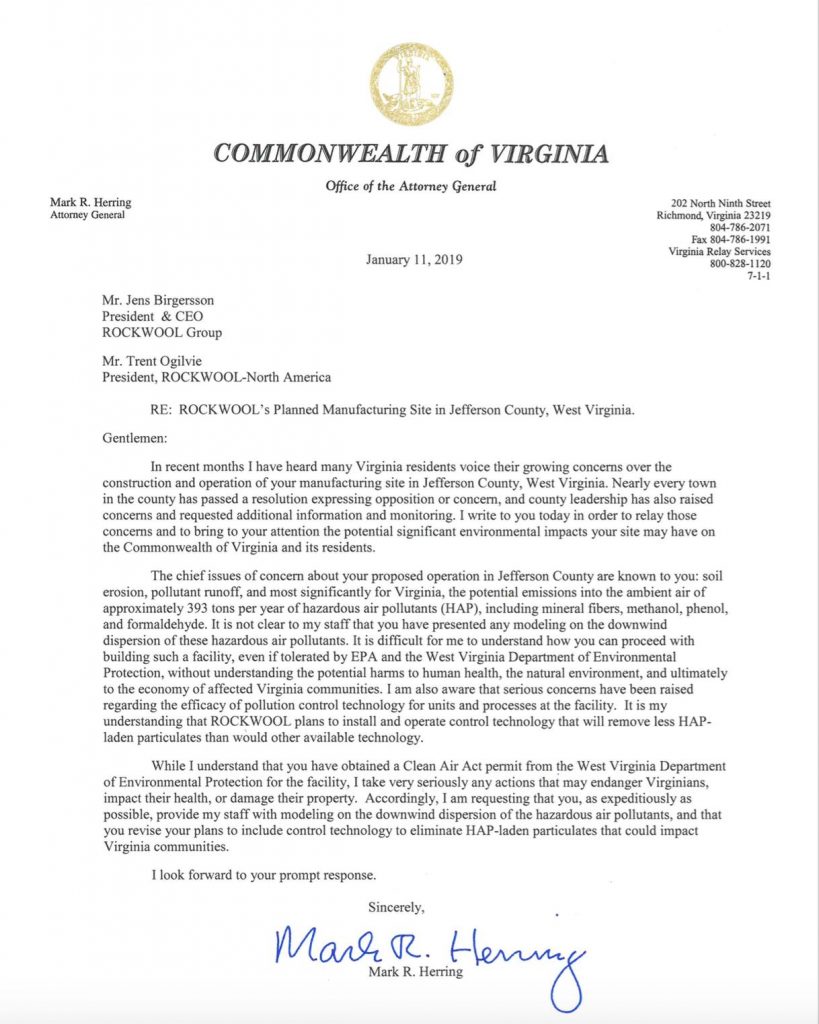 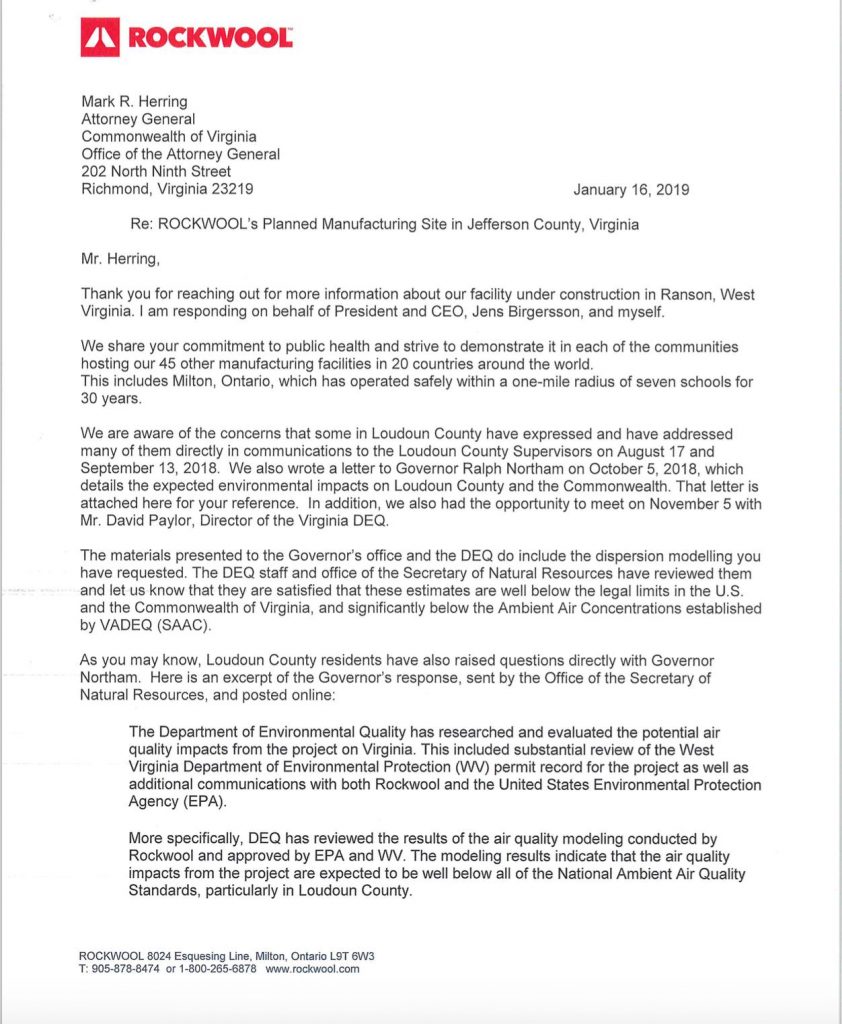 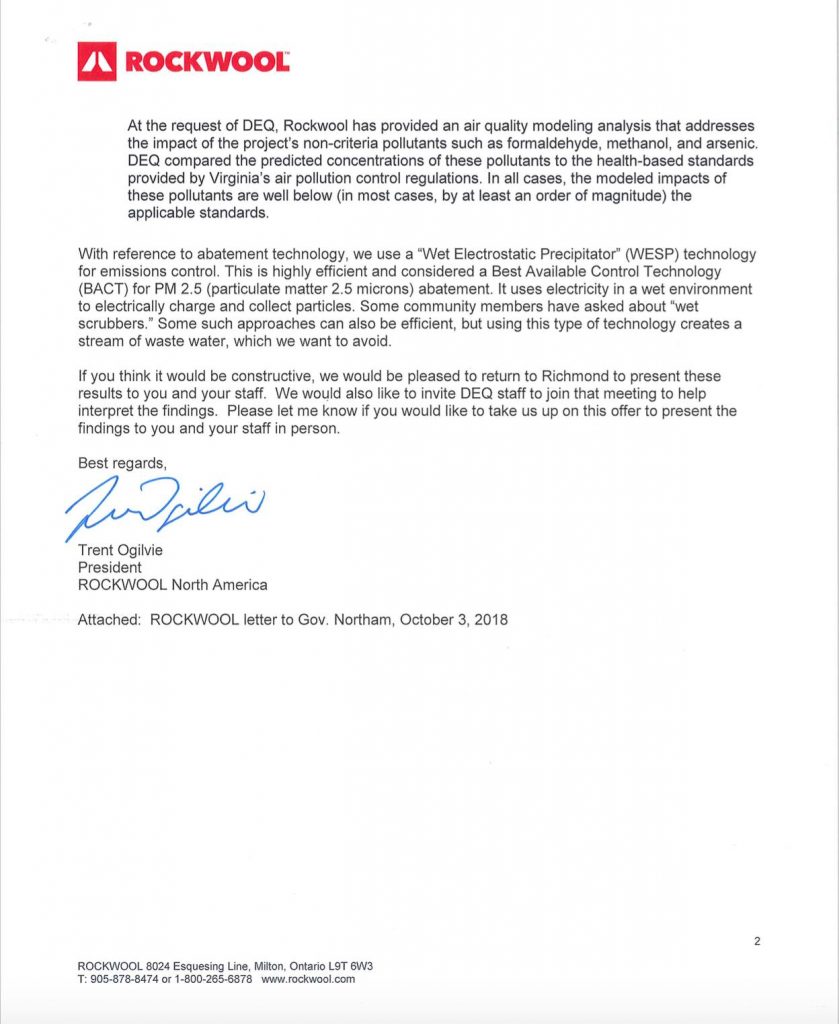