This piece is appearing in several newspapers in my very red congressional district (VA-06).

Like most of the people I know, I’ve tried over the years to become more the person I’d like to be, more the way I believe a person should be. Although I mostly am satisfied with the fruits of those labors, I regularly see the ways I fall short.

If I were given one wish for a change in myself, it would be to expand my capacity to love my fellow human beings.

I’m not bad at it. Indeed, in my most intimate circle – e.g. my marriage – I feel my love plenty fully. So I know what loving feels like. It’s one of the very best feelings.

Knowing that good feeling, I can readily experience how that feeling diminishes as I relate further out—  going out through close family and friends, to people I like, and onward toward humanity in general.

Not terribly far out into the periphery of my world, that good open-hearted feeling is barely detectable. Of course, not every kind of loving is the same – see my previous column “The Sacred Space of Lovers” – but an open-hearted valuing of the other is common to them all.

And I am convinced that I would be more deeply fulfilled in my own life if I could feel more open-hearted love for everyone I met.

I can be relied on to have “goodwill toward men” – and I almost never feel hatred toward anyone — but I don’t do much of “love thy neighbor, as thyself.”

One might say, in my defense, that it is natural not to feel great open-hearted love for people in general. But I know it’s possible to extend that kind of love further than I do– know it because I have a front-row seat to watch my wife in the world, and – while we’re equal in lovingness in the marriage — she really does give from the heart to a wider circle than I do.

Her example – and that also of my brother, who seems to live much of his life by giving from the heart to others – shows me that a meaningful degree of loving our neighbors as ourselves is within the realm of human possibility.

That spiritual/emotional goal seems to me a pinnacle of what a person can be. We usually focus on how it’s great for the receivers of such love, but my own experience tells me it’s really wonderful for the giver, too.

So, given how rewarding it feels to love, what holds me back?

I observe how part of how I hold back is that I have “criteria” that I apply to people, and I open my heart to them to the extent that the criteria are met. Do they show in their lives the virtues I care about? Do they value me? Are they rewarding to spend time with?

Applying those criteria runs counter to the idea of agape (the Greek word that’s translated as “love” in the Gospels), in which one loves others without regard to their characteristics, or what they give back in return.

Such love is the more precious for being rare.

Maybe having such love for everyone is hard because although loving can be a great feeling, open-heartedness doesn’t always feel good. Maybe it’s because — in this broken world — our hearts can be broken. We can be disappointed. Getting hurt, we learn fear, and keep our hearts hidden, protected.

Which brings me to how — with respect to my love for humanity — over the past twenty years I’ve become less the person I want to be. I’ve observed in myself how witnessing the history of these times has shaken my view of my fellow human beings. My heart has become less warm and open as I’ve watched so many people betray those virtues I used to see in them.

Even growing up, I knew that evil powers could bring out the worst in people. I knew that the Czar of Russia could goad the peasants to launch murderous attacks against neighboring Jewish villages; I knew that in America decades before I was born average white people could be whipped up into a mob to mutilate and lynch black men; and on TV (growing up in post-War America) I often saw footage of impassioned crowds of Germans roaring in unison “Sieg Heil!” as the Nazi regime inflamed their passions for a monstrous war.

But it’s one thing to know in the abstract what people can become, as shown by what happened in some other time or place. And it is quite another to see it happen around one, i.e. to live through a time when otherwise good people get changed into instruments of evil.

It’s not just the past two years that have diminished my capacity for that love (agape) that I deeply believe in. These couple years have just been the grotesque culmination of a destructive force that has been damaging America for years.

It was more than a decade ago that I published a piece  (http://web.archive.org/web/20160521205943/http://www.nonesoblind.org/blog/?p=1359  )  lamenting how not only the nation I love but I, too, have been damaged by that force that’s been bringing out the worst in so many of my fellow citizens.

I wrote: “I have become more fearful, just like the fear-driven people through whom this evil has worked… I can see in my heart that .. evil has left its imprint.”

But I still know that love is best both for our world, and for our own hearts and souls. And that what needs to be opposed is the brokenness, not those who are broken. 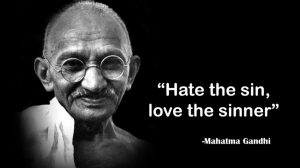