For those not familiar with her, Virginia Del. Elizabeth Guzman (D-HD31) has been one of the most impressive members of the powerhouse Virginia House of Delegates Democratic “wave” class of November 2017. Among other things, as this article points out, Guzman was the first Latina – and one of the first two immigrant women – elected to the Virginia House of Delegates; she is a social worker and public administrator with not one but TWO Master’s degrees (in social work and public administration); she is a strong progressive and environmentalist; and last but not least, she was selected by Nancy Pelosi to deliver the Spanish-language rebuttal to Trump’s first State of the Union address in January 2018 — and she knocked it out of the ballpark with a great speech! Clearly, this is someone we should all be supporting for reelection in 2019. I know I do.

Del. Guzman represents a district won by Ralph Northam 56%-43% in 2017, so it’s solidly “blue.” Still, Guzman has drawn a Republican challenger, named D.J. Jordan, whose work experience includes a stint at Fox News (as Assignment Editor) and for super-conservative U.S. Senator James Lankford of Oklahoma (as Communications Director). On Jordan’s website, he claims that he is running for Virginia House of Delegates to “solve problems,” NOT to “disparage political opponents.” Yet this morning, on Trumpster right-wing radio (“The John Fredericks Show”), Jordan not only disparaged his political opponent Elizabeth Guzman, but went right for one of the most incendiary attacks you can come up with. Check it out:

“The Women’s March took place this last weekend and it’s, you know, the storyline all across the nation has been some of the hateful anti-Semitic rhetoric that’s come from the leadership of the Women’s March…And even though all of these national leaders are distancing themselves, I think it was shocking that Delegate Elizabeth Guzman chose to continue to march side-by-side with these leaders who refused to distance themselves and repudiate the anti-Semitism within their movement…I think she owes the Jewish people in Virginia and specifically in the District 31 an apology…I think it’s really really reprehensible that she would side herself with those individuals and almost be proud of it. She actually tweeted out a picture of herself at the march...I don’t know [if she’s an anti-Semite]…I think that she owes an apology to the people of the District 31 and I think she needs to answer that question – does she agree with Tamika Mallory and Carmen Perez and all these individuals who have said some pretty hateful things about the Jewish state…about the BDS movement – the boycott divestment and sanctions movement – I think the people of District 31 deserve an explanation.”

First off, so much for D.J. Jordan’s pledge not to disparage his political opponent – in this case, strongly implying that Elizabeth Guzman might be an anti-Semite, or at least not have a problem with anti-Semitism, because she attended the Women’s March this past weekend.

Second, I asked a Jewish friend of mine who is heavily involved in Virginia politics what she thought, and she said that although she’s not personally comfortable with the leadership of the Women’s March, what Jordan said about Guzman was “a bridge too far,” adding that it’s not like Guzman had “intentionally chosen to walk with the Nation of Islam or something.” My friend agreed that the leaders of the Women’s March are problematic, but also that just because you chose to attend the March does NOT mean you are an anti-Semite, or even condoning anti-Semitism, by any stretch of the imagination. My friend added, “It’s not even guilt by association, because there are plenty of other associations for the Women’s March, plenty of Jewish women went.”

Now personally, I find it very sad – tragic, really – that an event I attended in January 2017, along with something like a million other people (including my wife and sisters-in-law), is no longer the unifying, inspirational, positive, uplifting event it was back then. As a Washington Post article wrote the other day:

“When it first debuted in 2017 as a protest of Donald Trump’s election as president, the Women’s March was praised for bringing together women of all races, ethnicities and religions in a vast and unprecedented show of unity on the Mall.

Now, as the rally prepares to return to the nation’s capital on Saturday, that sense of unity has frayed as Jewish women debate whether to turn out amid allegations of anti-Semitism by the march leaders.”

Which is very, very unfortunate, as what we need right now is focus and unity both AGAINST the dire menace of Trump, and FOR our own positive message(s), not disunity (a “progressive rift”) caused by the organizers of the Women’s March. Still, as that same WaPo article pointed out, it’s not morally black-and-white, and both progressives in general and Jewish women specifically were divided over whether or not to participate in the March. In the end, looking at the speakers list, news stories and my social media feeds, it seems like a much, much smaller number of elected officials and candidates – including essentially no 2020 Democratic presidential candidates – ended up attending the Women’s March this year than in 2017, when just about EVERYONE attended. And I can’t say I blame them. However, again, my view is that just because someone DID choose to attend the March this year, one can not conclude that they are, in any way/shape/form, anti-Semitic or condoning anti-Semitism. And to strongly imply that they are, as D.J. Jordan did this morning on right-wing radio, is simply uncalled for.

P.S. In this same interview, Jordan is slammed by John Fredericks by refusing to say whether or not he supports Virginia ratifying the ERA. A clearly exasperated Fredericks responds to Jordan: “Come on man…I’m not gonna let this go, maybe you can get away with that at ABC News; you’re running for House of Delegates, it’s the biggest vote coming up in there…it’s a simple question…that’s a very disappointing answer.” 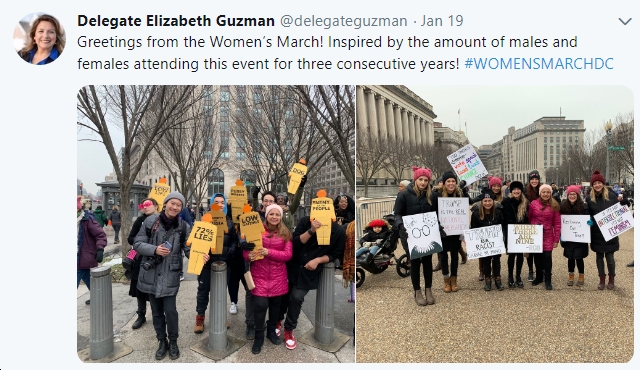