The announcement a few minutes ago by Fairfax County (Hunter Mill District) Supervisor Cathy Hudgins was expected, but still big news. With Hudgins’ announcement, there are now four incumbent Fairfax County Board members – Chair Sharon Bulova, Braddock District Supervisor John Cook, Providence District Supervisor Linda Smyth and Hudgins – who will be departing the Board at the end of this year. That’s a lot of change in Virginia’s largest jurisdiction, and it doesn’t even count all the turnover on the School Board!

Hudgins has been on the Board since 2000, and has been a strong progressive, as well as the only African American (or Person of Color) on the Board. Currently, there are three Democrats – Parker Messick (“As Supervisor, I plan to stop big development and bring your voices back into local government”), Shyamali Hauth(“Air Force veteran, an immigrant and a community organizer”) and Laurie Dodd (“a child advocate attorney, representing neglected and abused children in juvenile court”) running for this seat.

P.S.  See here for a complete – or, at least one I’m trying to keep as complete as possible! – list of vacancies on the Fairfax County Board and elsewhere. 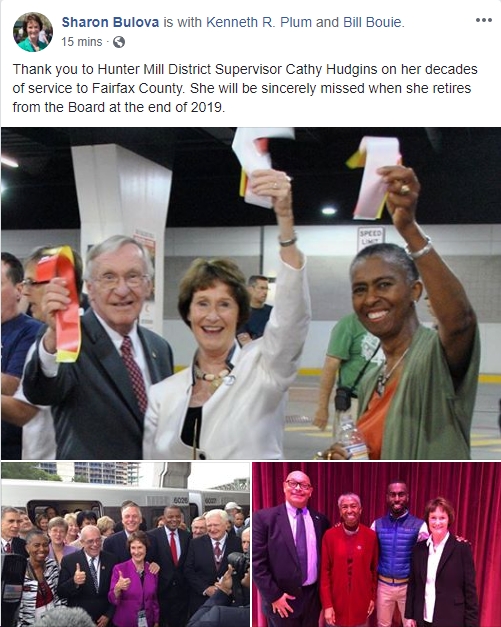 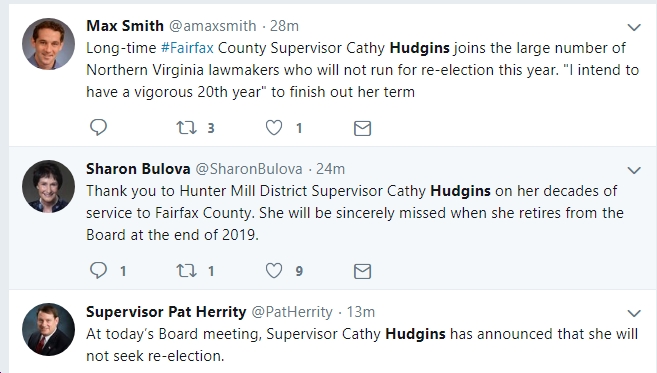