VCU’s L. Douglas Wilder School of Government and Public Affairs is out with a new Virginia public policy poll, and it has some interesting findings. These include:

*Democrats have a 9-point lead (42%-33%) among Virginia adults (note: NOT “likely voters” or even “registered voters”) for control of the General Assembly, with 25% not knowing or refusing to say who they prefer. Democrats lead HUGE (49%-29%) among women, but trail narrowly (38%-35%) among men. Democrats also lead big (61%-21%) among non-whites, while trailing by single digits (41%-34%) among whites. Also worth noting, “Partisans more likely to prefer control by own party but more Republicans are undecided than is the case with Democrats.” 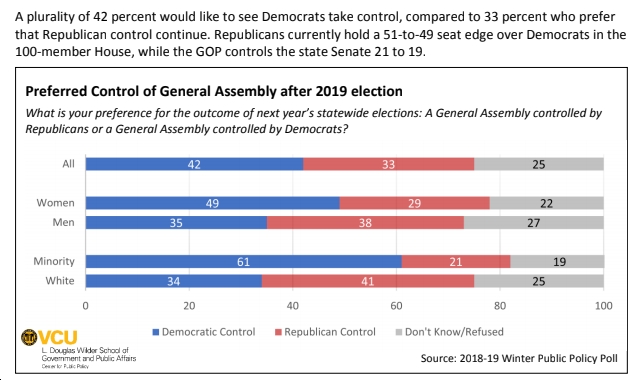