Hat tip to Alan Suderman of the AP on this one: “Bizarro revolving door: Terry McAuliffe’s former COS, Paul Reagan, is lobbying in Va. on behalf of Koch-backed Americans for Prosperity. AFP was one of McAuliffe’s loudest critics.”

But wait, it gets worse. Note that Paul Reagan is currently Sr. VP, Federal Public Affairs at McGuireWoods (aka, “Virginia’s shadow government“). Also note that Reagan has worked for a long line of Democratic elected officials in Virginia, including Rep. L.F. Payne (1995-1996), Rep. Jim Moran (1996-2001), Gov. Mark Warner (2001-2005), Sen. Jim Webb (2006-2013), Gov. Terry McAuliffe (2014-2018), with a couple other stints at McGuireWoods for good measure. So now, you’ve just gotta love that Reagan has gone to work for the worst of the worst – “Americans for Prosperity,” about which SourceWatch writes:

Americans for Prosperity is a right-wing political advocacy group founded by billionaire brothers David and Charles Koch, the owners of Koch Industries.

FP serves as the Kochs’ “grassroots” operation, also known as astroturf. AFP spends millions on TV ads in election cycles. In the 2012 election cycle, it was a key component of the Kochs’ $400 million political network, receiving large portions of its money from Koch-linked dark money groups like Freedom Partners, American Encore, and Donors Trust. AFP’s budget, which comes from the Koch family foundations and other unknown sources, surged from $7 million in 2007 to $40 million in 2010 and then peaked $115 million in 2012.[2] In 2016, the most recently available report, AFP’s budget was $64 million.[3]According to the Center for Public Integrity, Americans for Prosperity “spent a staggering $122 million (in 2012) as it unsuccessfully attempted to defeat President Barack Obama and congressional Democrats,” including $83 million on “communications, ads, and media.”[4]

AFP’s messages are in sync with those of other groups funded by the Kochs and the Kochs’ other special interest groups that work against progressive or Democratic initiatives and protections for workers and the environment. Accordingly, AFP opposes labor unions, health care reform, stimulus spending, and any effort to combat climate change including President Obama’s 2015 Clean Power Plan.

Ah, the “Virginia Way”…such a lovely aroma it exudes, huh? 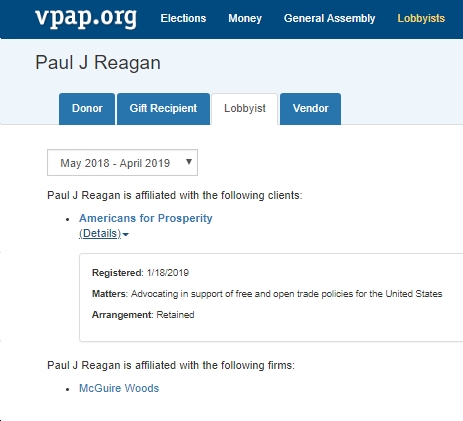