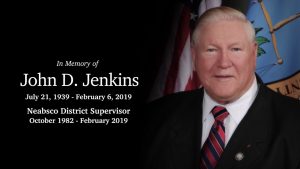 On February 6th, 2019, Prince William County lost a legend. John D. Jenkins is one of the most well-known local elected officials in Northern Virginia, and his list of accomplishments in our community is longer than most could manage in several lifetimes. That’s part of why the General Assembly this past week passed resolutions in honor of his life.

Supervisor Jenkins’ passing has resulted in a Special Election, and the writ calling for that election – to be held on Tuesday, April 2nd – was issued mid-last week, even before John was laid to final rest. As Prince William is still mourning and healing from the loss of a pillar within our community, we find ourselves preparing for both a nomination process and special election that will be here before we know it. For those who remember, we had a similar timeline two years ago for Clerk of the Court.

By Virginia law (as cited in the DPVA Special Elections Memo,) our nominating contest must occur “(i) at least 60 days before the election or (ii) within five days of any writ of election or order calling a special election to be held less than 60 days after the issuance of the writ or order.” As we’re well within 60 days before the Special Election, we have to abide by the five days.

The nomination method is currently going to be an Unassembled Caucus (Firehouse Primary as some call it) to be held on Tuesday, February 19th as per the recently-published Call to Caucus. It should be noted here that the writ may be rescinded on Tuesday in favor of a new writ, as per the Call to Caucus itself:

“Currently, there is a plan to vote to cancel the current writ on Tuesday by the Board of County Supervisors in a executive closed door meeting and if the judge approves the new writ of election, the caucus is then canceled immediately.”

We do not know if our Board of County Supervisors will follow through with this plan. On one hand, the residents of the Neabsco District deserve representation, particularly in light of Supervisor Jenkins being absent since last Fall. On the other hand, all elections should be done as democratically as possible, and we should be doing everything we can to ensure maximum voter awareness and participation.

Providing a new writ would give parties more time to prepare a nomination process with more accessible hours, and could be more widely advertised. While the Special Election itself must be on a Tuesday and be held between specific hours, caucuses do not; it could be held on a weekend, or at the very least have hours conducive to residents who work.

In my opinion, the laws governing special elections should be examined and changed. If the Code of Virginia allows writs to be issued within 60 days of the intended special election, more time should be given to parties to organize their nomination contests. 10 days – while not much longer in the grand scheme of things – would give us a lot more flexibility.

On top of that, it would be great to see DPVA issue additional guidance on these Unassembled Caucuses encouraging – if not outright requiring – accessible hours. We cannot claim to be the party of working people if we restrict elections to times in which people who work cannot participate.