Richmond, VA –  Today, in response to a formal request from Delegate Mark Levine (D-45th District), Virginia Attorney General Mark Herring published an official advisory opinion stating that the Commonwealth Transportation Board (CTB) has legal authority to change the name of Jefferson Davis Highway in Arlington County, provided that the Arlington County Board passes a resolution requesting such a change. The Attorney General’s opinion certifies the legal analysis of Delegate Levine, who maintained, contrary to earlier informal advice issued by a member of Herring’s office, that Arlington and the CTB did in fact have authority to change the name without further General Assembly approval.

“I want to thank the Attorney General for issuing this official opinion that concurs with my long-held legal analysis,” said Delegate Levine. “I know the Arlington County Board strongly supports the name change, but its members had expressed concern about the legal ramifications of doing so without going through the General Assembly. This formal Attorney General opinion officially lays those concerns to rest. Route One runs through the heart of my district, but its current name does not reflect the hearts of the people of Arlington and Alexandria I’m proud to represent. It’s 2019. The vast majority of Northern Virginians no longer wants to honor the Confederacy or Jefferson Davis.”

The official Attorney General opinion, addressed in a letter to Delegate Levine, clarifies that a 2012 Virginia statute removed the legal barrier by which the CTB, prior to 2012, could not change highway names formerly designated by the General Assembly. “The deletion of this language in 2012 demonstrates a clear legislative intent to empower the CTB to rename transportation facilities that were originally named by the General Assembly,” the Attorney General writes, indicating his agreement with Delegate Levine’s interpretation of the law. “Accordingly,” the letter concludes, “it is my opinion that the Commonwealth Transportation Board may change the name of those portions of Jefferson Davis Highway located in Arlington County, provided that its Board [] adopts a resolution requesting the renaming.”

The Arlington County Board could pass such a resolution as early as its next meeting on April 23. The measure would then go before the CTB, whose members are appointed by the Governor of Virginia. If all goes well, Arlington street signs could be changed as early as this summer.

The highway, known by locals as “Route One” (its designation in the US Highway System) enters Virginia in Arlington and passes through Alexandria and Fairfax down to Richmond and points further south. Although the Virginia General Assembly in 1922 designated the entirety of the highway as “Jefferson Davis Highway,” the road has at least 18 different local names as it wends its way from the District of Columbia to the North Carolina border. Arlington would most likely rename the road “Richmond Highway,” the name long used in Fairfax County and the name which the City of Alexandria adopted just last year to replace “Jefferson Davis Highway.”

Jefferson Davis, the Mississippi Senator and slaveowner who became President of the Confederate States of America, had no significant ties to Northern Virginia. But the Virginia General Assembly’s 1922 law nevertheless praised Davis’s service to the Confederacy and issued the statewide designation in response to a request by the United Daughters of the Confederacy to build a Southern transcontinental highway in Davis’s honor. Davis was indicted for treason against the United States in 1865. He was pardoned in 1868 and never tried.

Read the Attorney General’s opinion below or by clicking here. 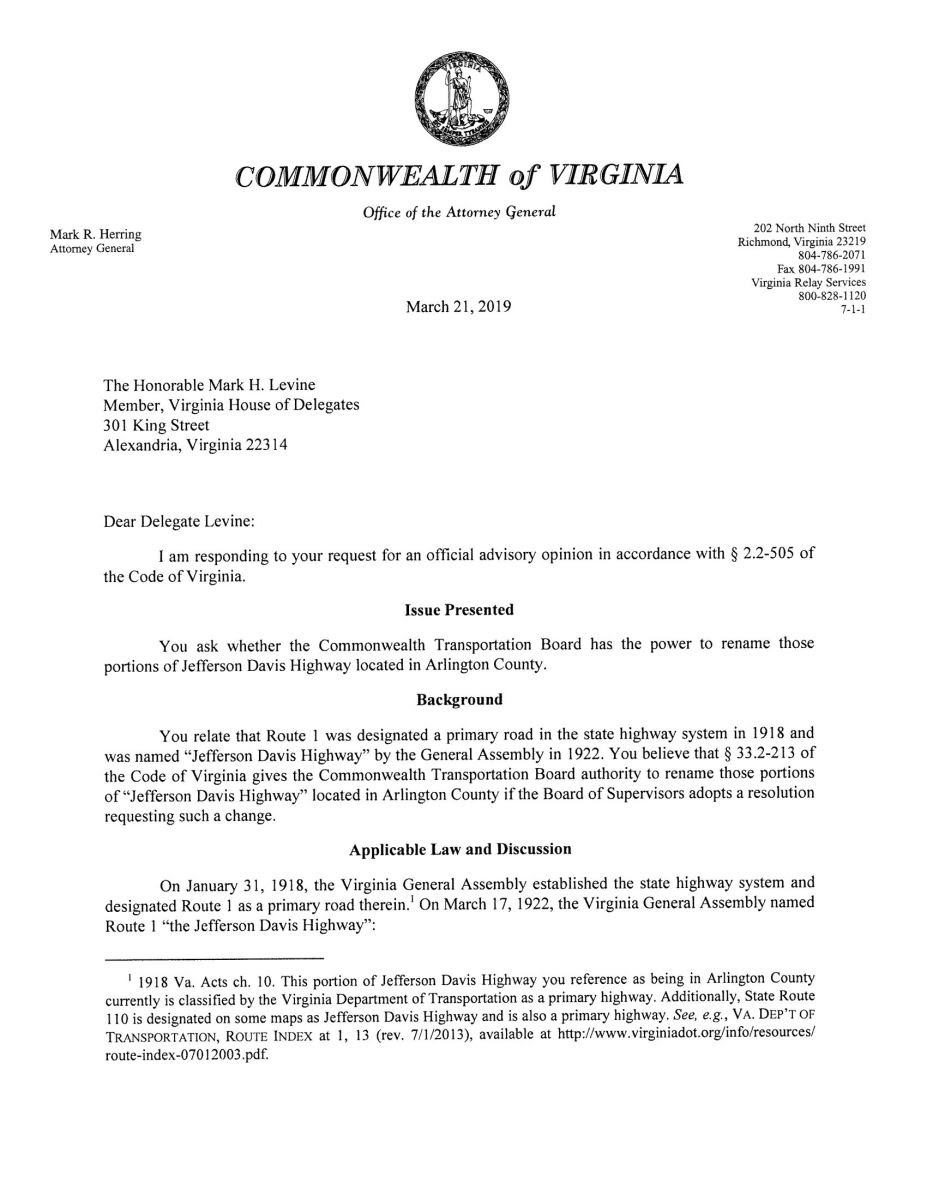 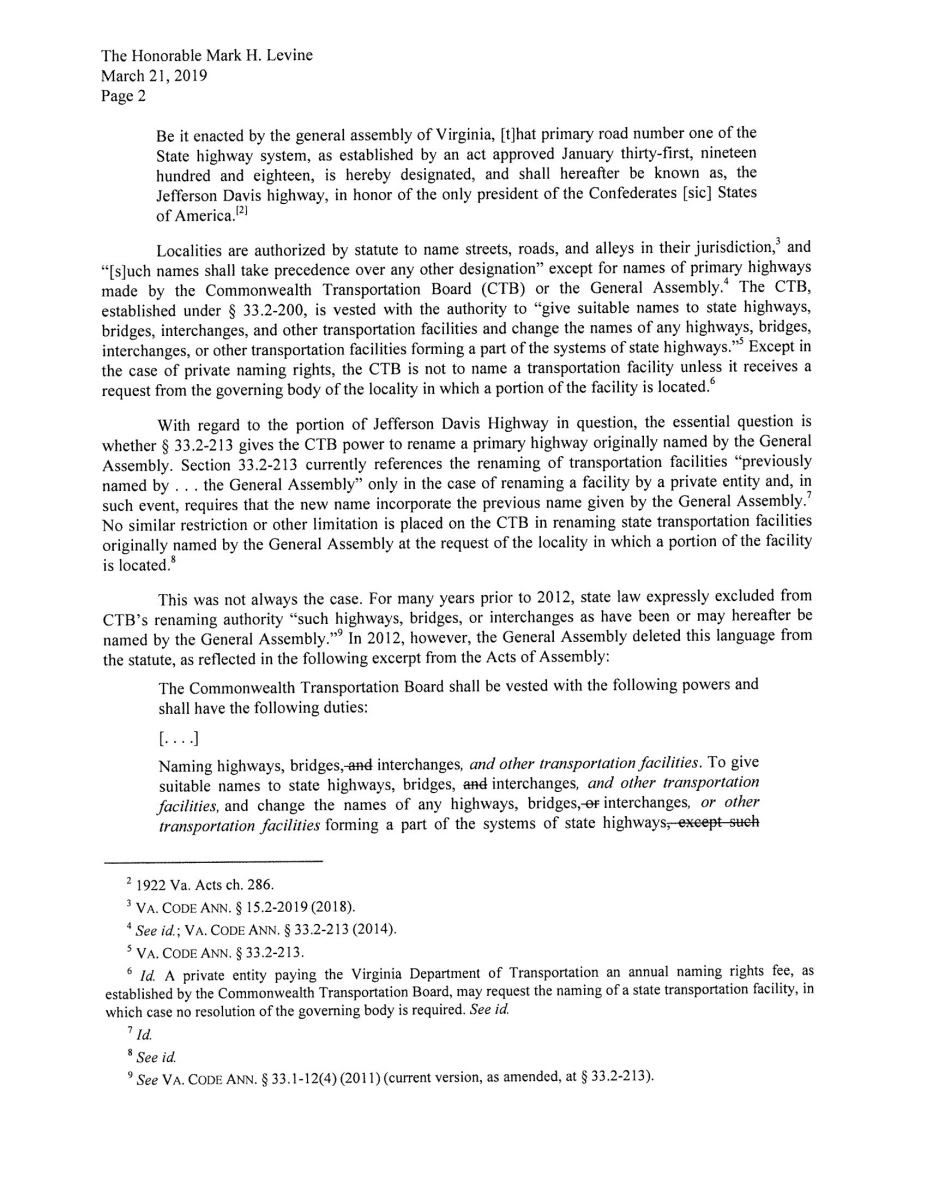 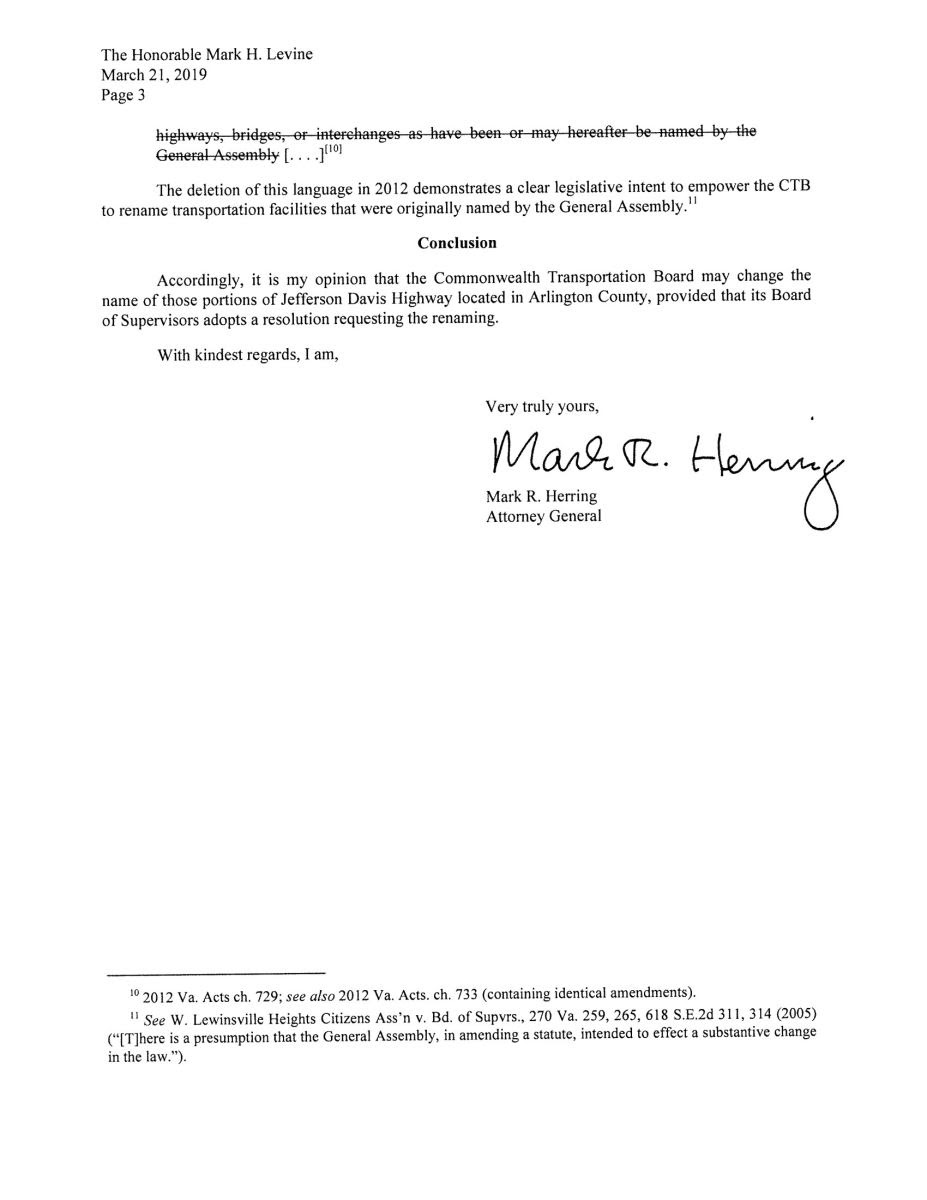