In the WaPo this weekend (really stupid article, by the way), State Sen. “Dominion Dick” Saslaw (D for Dominion) ridiculed and ripped the entire concept of not taking money from Dominion Energy, stating that if Democrats were to “unilaterally disarm,” they’d be “back down to 14 senators again.” 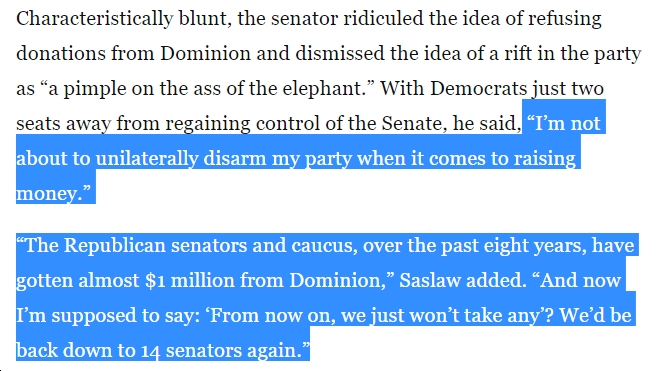 So now, Saslaw’s close ally, State Sen. Barbara Favola – recall that Saslaw worked VERY hard in 2011 to “clear the field” for her, then to attack and slime Jaime Areizaga-Soto, who dared to challenge Saslaw’s pick – has chimed in on that very subject. Except that it appears she’s not in sync with the guy who played a major role in helping elect her to the State Senate in the first place. Check it out.

Now, I’m of course happy to see more and more Democrats telling Tom Farrell and Company to shove their corrupt, dirty dollars where the sun don’t shine. But why is Saslaw’s close ally, Favola, doing so just a day after “Dominion Dick” basically said it would be politically suicidal and moronic for Democrats to disown Dominion dollars? Is Favola worried about her primary challenge from Nicole Merlene? Because other than that, I can’t think of a particular reason why Favola would have chosen this moment to disown Dominion’s dirty $$$. Thoughts?

The price of a gallon of gas in Virginia is $4.65 today.
Pain at the pump - brought to you by Republicans, who have worked relentlessly to keep us addicted to fossil fuels and from achieving a rapid transition to a 100% clean energy economy. Vote them out!