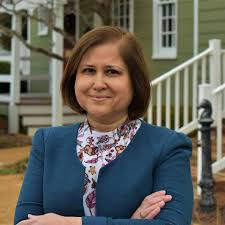 Four years ago, we had a great chance to win back the Virginia State Senate, with the key district being SD10 (57% Northam; Chesterfield County, Richmond City, Powhatan County). Unfortunately, we lost, in large part due to really bad candidate selection. My preferred candidate that year was a strong progressive and environmentalist named Emily Francis. The “establishment” candidate that year was a conservative Democrat – or maybe not even a Democrat at all, given that he ran in 2007 as an independent and said his political hero was Ronald Reagan (!) – named Dan Gecker. Brilliant, huh? Yeah…no, it wasn’t, with Gecker ending up losing to Republican Glen Sturtevant 50%-47% in this blue-leaning district.

This time around, I’m looking for a Democratic nominee who is a strong progressive, strong environmentalist, and of course a strong candidate to beat Sturtevant in November. Fortunately, I’m happy to report that I’ve found such a candidate, in Ghazala Hashmi. I’ll get into my reasons for endorsing her shortly, but first, let’s do a quick review of why Glen Sturtevant is NOT the “moderate” he falsely pretends to be and why he’s gotta go in November.

We could go on all day, but in sum, Sturtevant is a standard-issue right wingnut, except that he’s a wily/oily politician who knows he’s in an increasingly blue district, so he pretends to be “moderate” at times, hoping there might be a few Democrats out there who are gullible enough to buy his nonsense. Kinda shows what he thinks of Democratic voters’ intelligence level, I guess.

Now, despite the fact that Sturtevant is a right winger in a blue district, we can’t assume that he’s going to be a pushover, or even that we’re going to beat him.  For starters, the guy’s a skillful politician – even if it means being utterly dishonest about who he really is. Second, the guy’s got $216k in the bank, and Republicans are clearly going to try to defend him, so we’re going to need a top-tier candidate in every way, including the ability to raise a lot of money.

Which brings us to Ghazala Hashmi.

In addition to fundraising ability, I’d add several other factors in Hashmi’s favor, including: 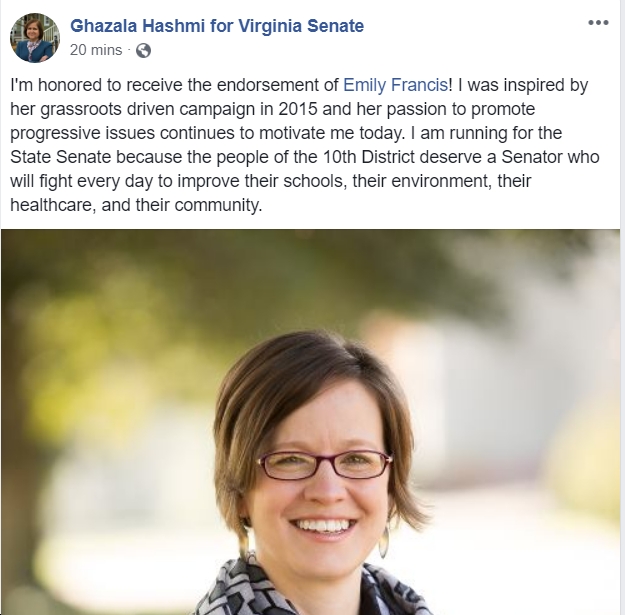 In sum, I believe that Ghazala Hashmi is a highly impressive person, strong progressive and passionate environmentalist. I also believe that she would make both the best Democratic candidate against Glen Sturtevant this fall, as well as a superb State Senator starting in January 2020. For all the reasons listed above, I enthusiastically endorse her and encourage everyone to help her win on June 11 and on November 5!