According to the Pittsburgh Post-Gazette:

Joe Biden is getting in.

Two sources familiar with Biden’s preliminary plans said the former vice president will announce his candidacy for the Democratic nomination for president on Wednesday in Charlottesville, Va., the site of a clash in August 2017 between white supremacists and counterprotesters that claimed one life.

Biden then will fly to Pittsburgh for a rally in the afternoon and then come to Philadelphia, where he will hold a rally at the Art Museum, though the sources said the plans have been shifting in recent days and could change again.

My initial reaction to this news was similar to UVA Professor Larry Sabato’s (see his tweet, below), that it “makes sense” in that Biden could use that platform to blast away at the Racist-in-Chief, at Trump’s crazy/disgusting “very fine people, on both sides” comments, and against racism/white supremacy in general. And yeah, that certainly WAS “one of Trump’s all-time low points,” which is saying something when you consider that every day – hell, every time the guy tweets or opens his pie hole! – seems to witness new “low points” by this corrupt, bigoted, incompetent, lawless, disgraceful excuse for a “president.” 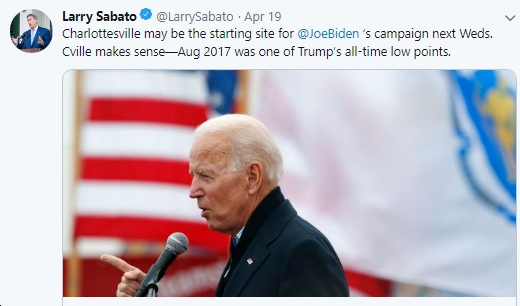 Having said that, I’ve been hearing a strong counter-argument for why Biden should *not* to go to Charlottesville to kick off his campaign. As Rev. Seth Wispelwey – who was “attacked as he linked arms with other clergy to protest white supremacy in Charlottesville last year” – puts it:

Dear @JoeBiden – Do not come to #Charlottesville to announce your campaign for presidency. We *will* renounce it, very publicly. We are not a political prop nor are we a platform for a status quo future. Our trauma is real and our love is fierce. Cheers.

Truly account for your past statements/efforts against school desegregation, the damage to Black & brown bodies by being ‘tough on crime’, the steamrolling of Anita Hill. Pressure @TerryMcAuliffe to own & reveal his state police orders/failures on A12, & @GovernorVA to resign.

And if, like @SenSanders, 26% of your supporters would go for Trump if it was between the President & Warren, you’re not ready. It was no mistake that 45’s flags flew abundantly here among the swastikas & Stars & Bars. Economic justice for all, but your followers need to *know.*

And even if you’ve already ruled out Charlottesville, or it wasn’t seriously considered in the first place, these exhortations still stand. Our country needs those responses, & the Dem. nominee needs to lead them.

Or, as another person I know who lives in the Charlottesville area put it to me, “folks here are not happy about other people using our pain for their purpose.”

So what do you think? On this one, I can see it both ways, but if a lot of folks in Charlottesville really don’t want Biden to come, then I guess I’d advise Biden not to do it. I also wonder if this incident has broader ramifications for Biden’s candidacy, given Biden’s sometimes highly problematic record on race over the years (e.g., see Biden’s tough talk on 1970s  school desegregation plan could get new scrutiny in today’s Democratic Party), given the changing times, changing attitudes, and changing Democratic Party. Can someone who’s been around as long as Biden has, who’s cast as many votes as he has and said as many things over the years – including on matters pertaining to race – as he’s said, unite the party and win the nomination? Or would his candidacy exacerbate various divisions and painful history in a way that would not be productive or successful?

What do you think? Vote in the poll, below.