The results of today’s Prince William County Republican “Firehouse Primary” are in, and there’s been a huge upset , with far-right extremist (see videos and screen shots, below) and outsider/gadfly Independent-turned-Republican John Gray defeating long-time County Supervisor Martin Nohe, a conservative Republican (but, by all accounts, not a crazy one), by a 3,158-2,422 margin. Wow.

Making the upset even crazier: according to VPAP, Nohe raised a whopping $131,568 in 1Q19, while John Gray raised just $12,500, all of which was from himself (e.g., he raised zero other than the $12,500 he gave himself). So yeah, Nohe massively outraised Gray, yet lost anyway. In the end, Gray, running as a hard-core Trumpster (e.g., virulently anti-immigrant, against what he calls “so called ‘transgender rights'”) against someone he demonized as a “never Trumper,” soft on illegal immigration, a tax hiker, etc, etc., kicked Nohe’s butt.

For his part, Nohe conceded a bit earlier this evening, writing (seemingly in disbelief) on his Facebook page (see below), “yes, I really lost” and claiming “it’s going to be ok.” Except that, nope, it’s almost certainly *not* going to be ok, either for Nohe’s political career or for Prince William County Republicans more broadly. Now, instead of having the top-of-the-ticket Republican running in the county this fall being the popular, relatively moderate/sane, serious, electable, well-funded Martin Nohe, every other Republican in Prince William County will now have to share the ballot with this John Gray nutjob/joke as their candidate for Chairman of the Board! Good luck with that, I guess…lol.

Meanwhile, if you’re someone like Supervisor Ruth Anderson (R-Occoquan) or Supervisor Jeanine Lawson (R-Brentsville), you certainly shouldn’t be happy at all right now. Same thing for Republican House of Delegates candidates in Prince William County, such as Heather Mitchell in HD2, Kelly Sweeney McGinn in HD13, DJ Jordan in HD31, Tim Hugo in HD40, Ian Lovejoy in HD50, Rich Anderson in HD51, etc.

On the other hand, if you’re a Democrat running in Prince William County, you should be *very* happy right now, as Republicans really seem hell-bent on committing political suicide in this increasingly diverse, “majority-minority,” “blue” county. Of course, this is what happens when you have the hardest core of the hard-core, far-right Republicans choosing the nominee – you end up with EW Jackson as your LG nominee (in 2013, as part of the “extreme team”), or in this case, John Gray as your County Board Chair nominee.

Do Republicans really think that this is a winning strategy? The only way I see that it could be is if Dems simply don’t show up this November, while the hardest of hard-core Republicans show up in droves. More likely scenario: Republicans just blew their chances for County Board Chair, while seriously hurting themselves up and down the ballot in Prince William County this November. On the bright side,, hey, it works for the party I’m rooting for! 🙂

P.S. Just to be 100% clear: this is *very* serious, a HUGE opportunity now for PW County Dems to not just win the Chair race big time, but also a bunch of other races – Supervisors, House of Delegates, etc. And no, we absolutely should *not* get any “false sense of security,” but should massive accelerate our push to turn PW County solid blue, permanently, once and for all. 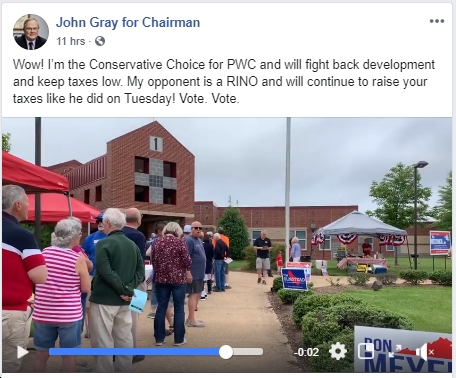 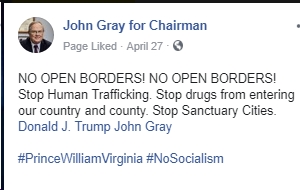 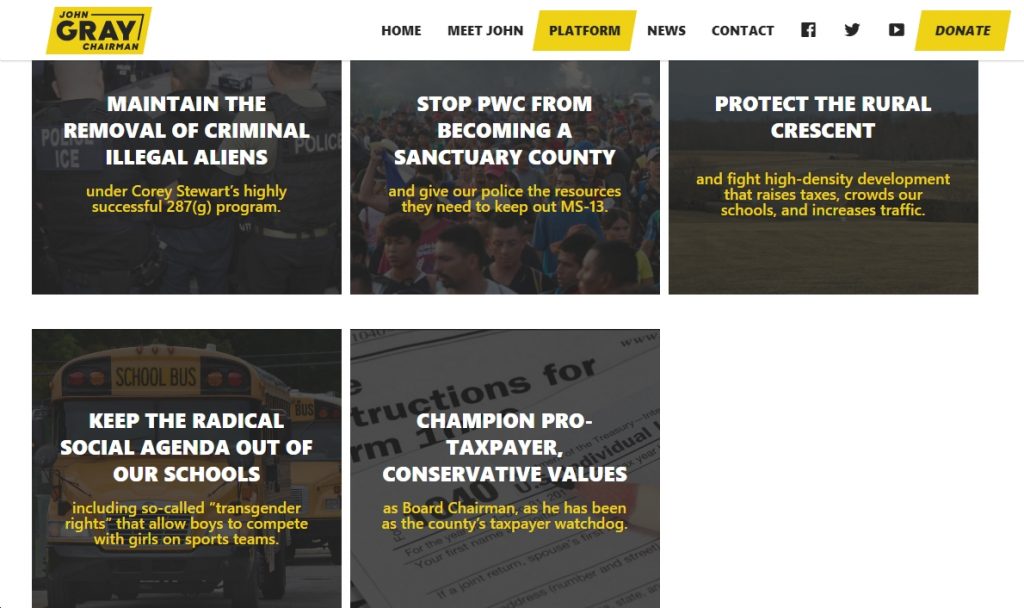 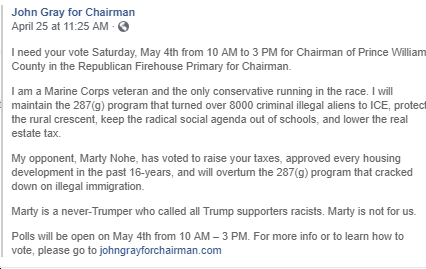 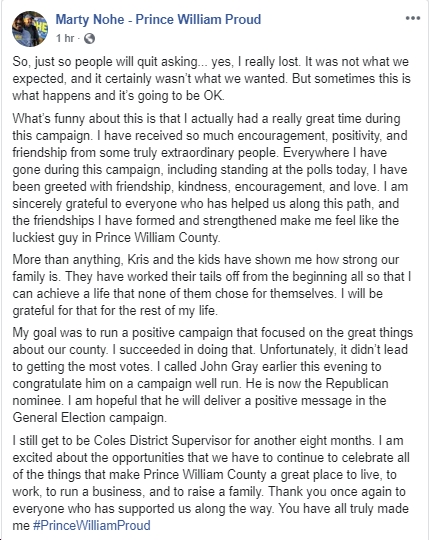 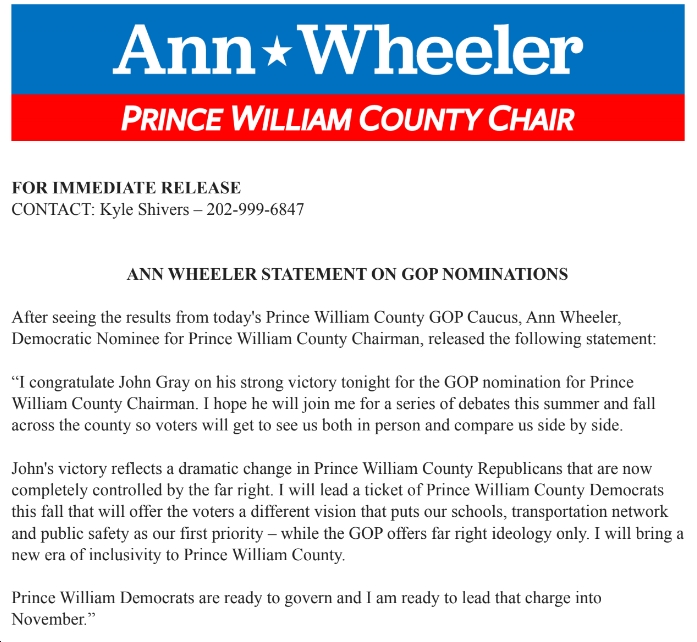 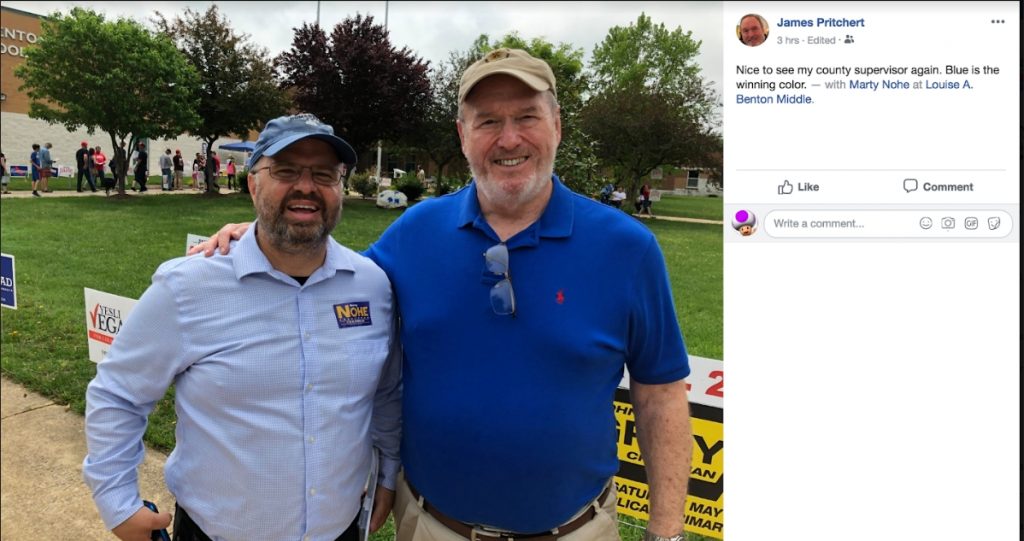