I wrote the other day about how, in Fairfax County’s Hunter Mill District Democratic primary on June 11, voters should select any candidate *other than* Maggie Parker. Why? Because, for starters, Parker looks and sounds suspiciously like a Republican:

I looked into Maggie Parker, and I did *not* like what I saw. For instance, she donated $1,000 to Republican-turned-Independent Scott York in the 2015 Loudoun County Board of Supervisors race, against Democrat Phyllis Randall. Not. Cool. At. All.

Also, in perusing her website, Parker honestly sounds more like a Republican than a Democrat, and certainly not a strong progressive or environmentalist. For instance, she writes that she supports “Promotion of economic growth to lower residential tax rate while supporting education, public safety, social services, and the continued reduction of homelessness.” Sounds like supply-side/trickle-down economics to me. Other than that, I see nothing in her issues section that talks about strong action to move Fairfax County towards clean energy; nothing about equity or “One Fairfax”; and almost nothing on important issues like housing affordability; social services; etc.

And, as an added “bonus,” her bio is replete with involvement in Chambers of Commerce, which sad to say, at this point have become largely adjuncts of the Republican Party.

And then there’s this fiasco, which Parker is involved with:

Comstock Companies, the developer of Reston Station, has barred political campaigning at Reston Station Plaza — a policy that clashes with the county’s official position on the issue.

Conflicting stances on the permissibility of political campaigning at the plaza has piqued some concerns about the privatization of public spaces in Reston.

The company, however, has adopted a longstanding policy that political campaigning is not allowed at the plaza, according to Maggie Parker, Comstock’s vice president of communications.

For the latest update on the Reston Station Plaza situation, see Reston Now, which reports that, “In a letter to Reston Now’s editor regarding the May 24 article, Chris Clemente, the company’s CEO, clarified Comstock’s position on the issue. His company’s vice president of communications, Maggie Parker, is running for Hunter Mill District Supervisor, and her campaign signs are plastered on the property.”

Speaking of Parker’s boss, Chris Clemente, he’s a big-time Republican donor — see below for one screenshot (I could have posted many more, but it’s easy enough to look up) which shows some of his donations, including to fine folks like Ed Gillespie, Tom Davis, George W. Bush, Paul Ryan, climate-science-denying James Inhofe, rabid homophobe/bigot Rick Santorum, etc, etc. So why is this Republican mega-donor pushing so hard for Democrats to nominate his preferred candidate, Maggie Parker, in the June 11th Democratic primary for Fairfax County (Hunter Mill District) Board of Supervisors? And why, given all the other information about Parker’s Republican leanings, should any Democrat vote for her? Got me. Instead, I encourage Hunter Mill Democrats to choose one of the other candidates for this seat:  Walter Alcorn, Shyamali Hauth, Laurie Dodd, Parker Messick. 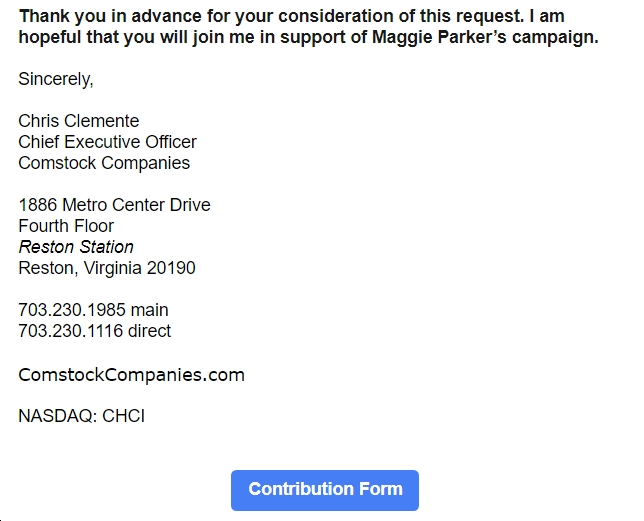 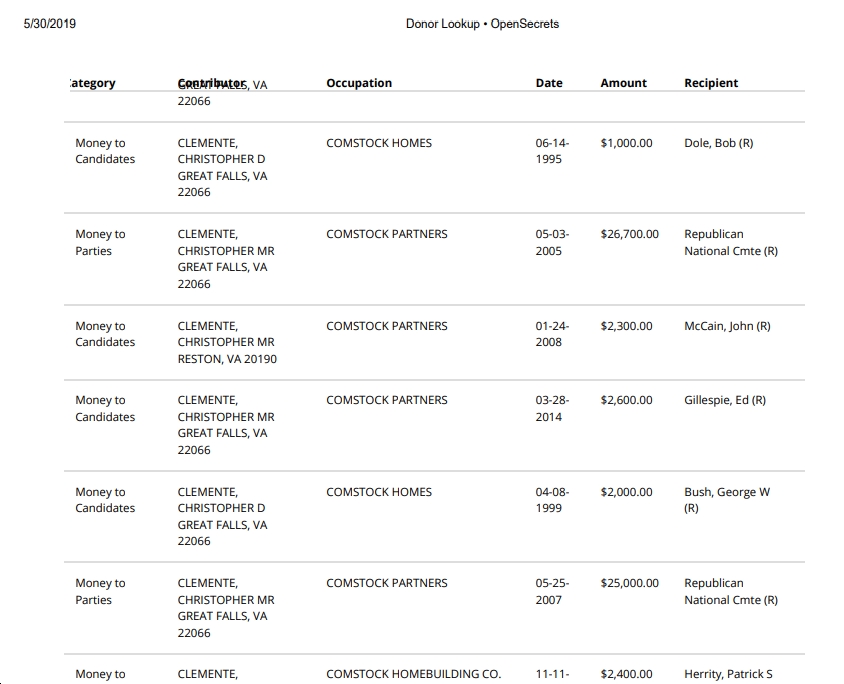