Back in early May, long-time Prince William County Supervisor Martin Nohe (R) was upset in a Republican “firehouse primary” by outsider/gadfly Independent-turned-Republican John Gray. As I wrote at the time, Gray ran as a hard-core Trumpster (e.g., virulently against “criminal illegal aliens” and Prince William County “becoming a sanctuary county,” also against what he calls “so called ‘transgender rights’”), who Kenny Boddye correctly pointed out “represents the xenophobic views of Corey Stewart, and the transphobic views of Bob Marshall.” Given his extremist views, perhaps we shouldn’t be surprised that Gray posted on his Facebook page about campaigning with “alt-right internet troll and conspiracy theorist” (e.g., “Pizzagate”) Jack Posobiec. Still…is this really what the Republican Party has descended to? (that was a rhetorical question, as we all know the answer is a resounding “YES!”)

With that, here’s some background on John Gray’s new BFF Jack Posobiec: 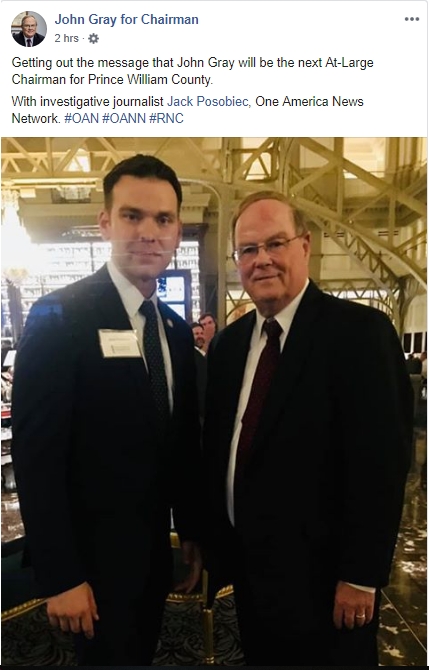