I’m not sure about Jerry Falwell, Jr. being *more* evil than “warlords and war criminals,” but I absolutely agree with Tom Perriello that Falwell is evil (see tweets, below). On a related note, check out last night’s NewsHour interview with lifelong conservative and Christian Peter Wehner, in which he says:

“I have been a Republican my entire adult life and a Christian for most of my adult life…And it has been both a dispiriting and a painful time for evangelical Christians. What’s been most painful for me is that I think they have — many of them, not all, but many of them and their leadership have discredited the Christian witness. What I think that they have done which is shameful is that they haven’t spoken truth to power. They haven’t held [Donald Trump] accountable. They have not only gone silent with his moral and ethical  transgressions. They have defended him. And that, I think, is a kind of intellectual and moral mistake of tremendous dimensions…I think they view Donald Trump as the general of their army, the leader of their cause. And he’s under attack, and they have decided that they’re going to defend him, no matter what, because he needs their defense. I think, frankly, that, for some of them, there’s the seduction of political power, that the idea that, if they are at all critical of Trump, they’re going to lose access to that power, and they don’t want to do that. I will tell you, Judy, the other thing that’s important for some evangelical Christians, not all, is that precisely the thing that ought to bother them the most, which is the cruelty, the crudity, the dehumanization that characterizes Donald Trump, I think they not only are not troubled by it. I think, for some of them, they appreciate it, because they feel like, this guy will figuratively bring a gun to a knife fight. And there’s a tremendous amount of anger and frustration and grievances that Christians have felt, and they look at Donald Trump as someone who is going to fight for them. I think it’s a huge mistake. I think it’s led them to very dark places, but I think that’s part of what’s going on.”

That, in a nutshell, describes Jerry Falwell, Jr. and the “very dark places” he inhabits. Of course, Falwell isn’t just the antithesis of Jesus Christ and everything preached in the Gospels with regard to politics. There’s also his utter hypocrisy when it comes to sexuality and personal morality, as exemplified by the “pool boy” story. What’s astounding is that anyone follows a scumbag like Falwell, or that anyone attends the Christian-oriented “university” (“Liberty”) he heads up. 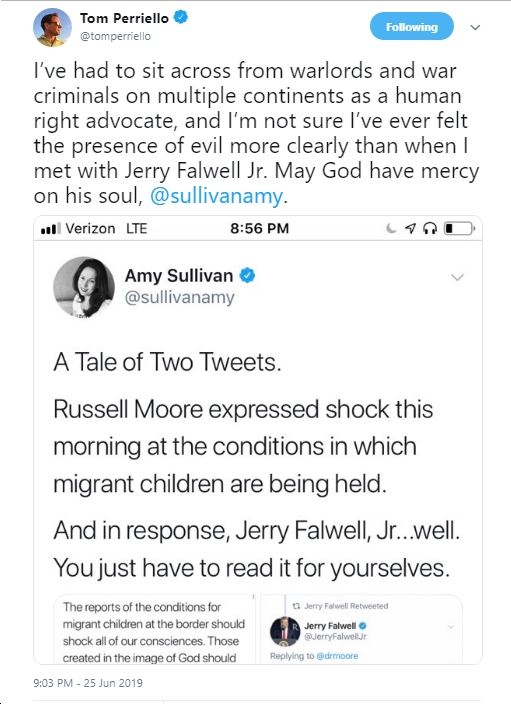 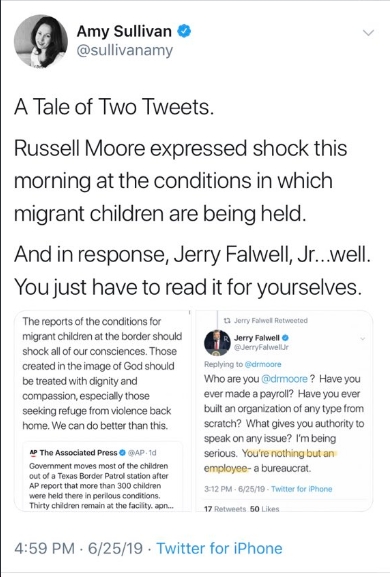