Honestly, as has been discussed at Blue Virginia, each selection could be seen as reasonable (whether or not one agrees with that endorsement) but, put together, this slate just didn’t pass the smell test.  That smell turned to a nasty odor when it became clear that the Post‘s DC-resident endorsement-Tsar for Virginia races (Lee Hockstader) had asked women — but not male — candidates questions like “How will you be chairman with two young kids?”

“We had a good conversation about the issues, but then the very last question of the interview was along the lines of, ‘How are you going to be chairman with two small children?’ It’s a fairly shocking question given that it was a room with three other women on the editorial board,” says [candidate for Board Chairman Alicia Plerhoples], who also graduated from Yale Law School, now teaches law at Georgetown and has two daughters.” 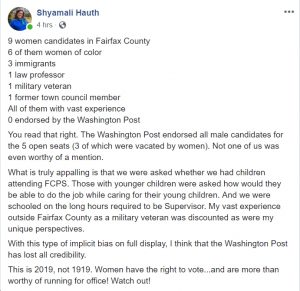 “I talked about the importance of having the perspective of a working mom with young kids on the board, and there aren’t any with young kids,” says Larysa Kautz, who has a three-and-half-year-old son. “And he said, ‘Well, that’s because there are late night meetings and it’s hard work.’ At which point I had to put the phone on mute because I had to gather myself.”

While you won’t see hide or hair of this controversy in the Post‘s pages, others are paying attention. Today’s Kojo Nnamdi show will have a segment at 12:32 today on “how local news organizations make political endorsements” featuring the Post‘s editorial board chair Fred Hyatt, Greater Greater Washington’s Andrew Dupuy, and GWU Professor Nikki Usher.

While the controversy seems to have sparked the segment, in setting up the segment, the show does not seem to have communicated with the female candidates who have gone on the record about the Post‘s child-care questioning. And, when contacted by a campaign, Kojo Nnamdi show staff responded that “It’s our understanding that the male candidates were asked the same question.” Hmmm … at least one male candidate endorsed by the Post has gone on the record that he wasn’t asked about child-rearing.

Rodney Lusk, who was endorsed by the Post for the seat Kautz is seeking, says in an email that questions about balancing parenting and the duties of office should not be asked.

“During my endorsement interview with The Washington Post I was not asked any questions in reference to my work-life balance. If questions of that nature were asked of any candidate — for any office — that would have been inappropriate and I would not condone it,” he wrote.

Let’s be clear, many have what might be terms ‘sour grapes’ re Hockstader’s (and thus the Post‘s) Virginia endorsements for many reasons with the poster child being his (and thus The Washington Post‘s) strong endorsement of extremist career GOP operative Barbara Comstock as some sort of emergent paragon of ‘moderation’. Thus, the all-male endorsement slate and child-rearing questioning of female candidates was simply adding fuel to the long-simmering fire. While three women candidates stated that Hockstader asked them these questions, he has gone on the record to dispute their “recollections” and perception of the interview process.

Hockstader, a longtime Post reporter who joined the editorial board in 2004, strongly disputes her recollection of their conversation.

“Any suggestion that moms or dads can’t or shouldn’t hold elective office is completely false, and so is the characterization you mention below,”

Again, as per above, a male candidate who Hockstader did endorse has gone on the record that he didn’t face similar questioning about his ability to handle Supervisor’s duties with young children in the house.

In any event, while interesting that Kojo Nnamdi is shining a spotlight on how local endorsements occur, one has to wonder if the spotlight is focused on the true controversy alive in Fairfax today when it comes to Washington Post endorsements: