The following screenshot of a Facebook post by Rep. Morgan Griffith (R-VA09) epitomizes so much that’s wrong with the hypocritical, hurt-their-own-people-and-then-pretend-it-never-happened Republicans. In Griffith’s case, he represents a poor part of Virginia, where people badly need access to affordable, quality health insurance, yet Griffith himself has voted repeatedly to prevent that from happening. For instance, see this post by Griffith in January 2016, in which Griffith he outs his vote in support of “placing on the President’s desk an Obamacare repeal bill.” Of course, Griffith was simply doing what the vast majority of his fellow Republicans were doing; recall that House Republicans voted more than 50 (!) times to repeal the Affordable Care Act. Also note that Griffith is hostile to Medicaid, claiming that “it was never intended to be a long term benefit for abled bodied adults who choose not to work.” This, despite the fact that Griffith’s part of the state has a  high percentage of uninsured people eligible for Medicaid coverage.

In sum, as I wrote on Griffiths’ Facebook page:

You really don’t understand why RAM is even needed in the first place, do you? Or do you simply not give a crap? Fact is, for many years you and your Republican colleagues have voted against providing access to affordable, quality health care for your own constituents. Now you have the nerve to show up at RAM? How does your head not explode from the massive cognitive dissonance?

I also liked a few other comments on Griffith’s Facebook page, such as “Universal health care would really help these people!” and “So what is your plan for healthcare?” and “Shameful that RAM is needed. Straighten up & fly right Morgan.”

Bottom line: Republicans like Rep. Morgan Griffith are massive hypocrites, virulently opposing healthcare coverage for their own constituents, then showing up for photo ops at events like the Remote Area Medical (RAM) clinic, which shouldn’t even be necessary in a wealthy country like ours. The big question is, why does anyone vote for Griffith and his ilk??? 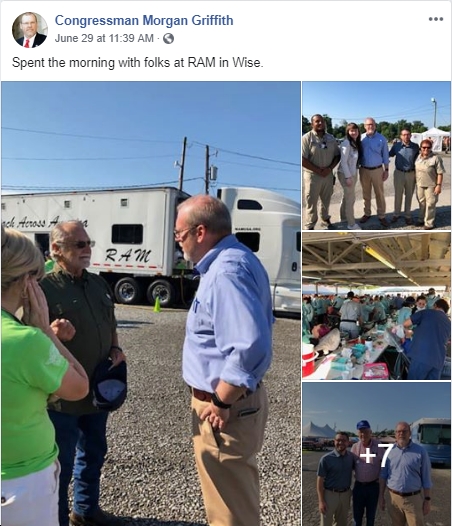 “There’s no place for white supremacy in Virginia,” Yet Youngkin Says Racist VDH Head Who “Trumpets These Disgusting Views” Is “Very Capable”

Can a Society Really Claim To Be “Free” If You’re Not Safe at Schools or Hospitals?