Late this afternoon, the U.S. House of Representatives voted 284-149 for the bipartisan budget agreement reached by Speaker Nancy Pelosi and the Trump administration. The vote broke down as 219-16 among Democrats, 65-132 among Republicans. Note that by passing this deal, “congressional leaders and the Trump administration are averting a disaster scenario.” Why? Because Congress was “staring down a final deadline of October 1, by which time the government would have run out of funding and shut down, and the current government budget caps would also expire, automatically triggering roughly $120 billion in across-the-board cuts to domestic and military programs.” That would have been really, really bad. Which means that the correct vote on this deal was “aye,” even if one had to hold one’s nose doing so. 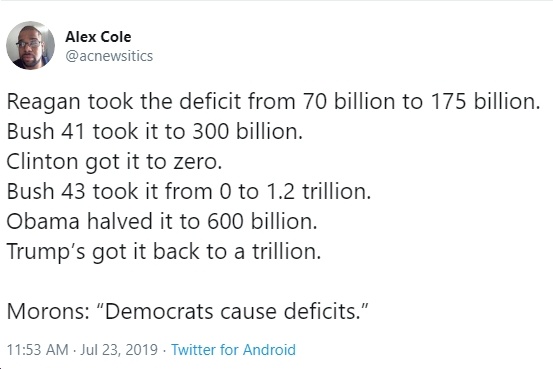 So yeah, there’s a pattern there: when Republicans are in charge, they explode the deficit (by starting wars, not cutting spending AND giving massive tax cuts to corporations and rich people who don’t need the extra money); when Democrats are in charge, they reduce the deficit (by being fiscally responsible). And no, that’s *not* the narrative you’ll find in the so-called “liberal media,” which of course is not liberal.

Wittman: We must get our nation’s fiscal house in order
REP. ROB WITTMAN·THURSDAY, JULY 25, 2019

WASHINGTON – Congressman Rob Wittman (VA-01) released this statement after voting “no” on the Bipartisan Budget Act of 2019.

“It is imperative that we get our nation’s fiscal house in order and work to address our debt and deficit – or else we continue to push the problems of today onto our children and grandchildren. The longer we fail to address our nation’s spending problem, the harder it becomes to solve the problem of our country’s crippling debt. I have long advocated for budgetary certainty for our military and federal agencies, but by approving this legislation we are risking our long-term fiscal solvency – putting the health of these very institutions at risk.

“Today, the House was forced to vote on a budget deal that raises spending caps above current levels by over $300 billion and temporarily suspends the debt ceiling. The federal deficit for the fiscal year 2020 is already set to hit a staggering $1.10 trillion. To make matters worse, this budget agreement will add nearly $2 trillion to the federal debt over the next 10 years.

“I’m extremely concerned about increased domestic spending levels and suspending the debt ceiling without addressing the fundamental problem of our nation’s runaway, autopilot spending. However, if we are forced to increase federal spending, it is imperative we do so with an equal dollar amount of offsets. The White House proposed $574 billion in potential cuts, but only $77.3 billion were included. Of those cuts included, none were structural changes but instead gimmicks with savings not realized until the ninth and tenth year of the budget window.

“We absolutely must take tangible steps to reduce our deficit and debt. While we can certainly start with eliminating duplicative programs, wasteful spending, and fraud, if we don’t address the broken budget and appropriation system producing these spending deals we won’t ever solve this problem. Returning to regular order will go a long way towards bringing transparency back to the budget and appropriations process. However, this requires holding Members of Congress accountable. I have three bills to achieve this: the No Budget No Pay Act that withholds Member pay if a budget isn’t passed by April 15; the Stay on Schedule Resolution that requires the House to stay in session through August – which many Members use as vacation – if all appropriations bills are not passed by the end of July; and finally the Inaction Has Consequences Act that withholds Member pay if all 12 appropriations bills are not completed by the end of the fiscal year. This level of transparency and accountability is critical not only to get the budget process under control but also to rein in wasteful spending.

“It is important to note that this legislation does end the threat of sharp defense budget cuts that were scheduled to go into effect January 1st – something I wholeheartedly support and have continued to fight for. However, the topline funding level for defense is well below the request of the Department of Defense and would include only a .3 percent increase in 2021, ignoring the 3-5 percent real growth former Defense Secretary Jim Mattis and former Chairman of the Joint Chiefs of Staff Gen. Joseph Dunford have stated is necessary to preserve the competitive advantage the United States has today. This is unacceptable. Throughout my time serving the First District in Congress, I have fought to secure on-time, reliable funding for our national defense and ensure our men and women in uniform have the proper training and equipment to carry out their mission and return home safely. I find it disheartening that Democrats continue to hold defense spending increases hostage for non-defense spending increases, today was no exception.

Regardless, Congress must now provide adequate and timely funding in the upcoming FY20 Defense Appropriations bill to be considered later in the year.

“We have a lot of work to do to get this fiscal crisis under control and to make sure we don’t burden future generations; it should not be their job to clean up this mess. We need to cancel August recess, go back to the negotiating table, and reach a responsible budget agreement that benefits the American people.”

Congressman Rob Wittman represents the 1st District of Virginia. He serves on the House Natural Resources Committee and the House Armed Services Committee, where he serves as the ranking member of the Seapower and Projection Forces Subcommittee. 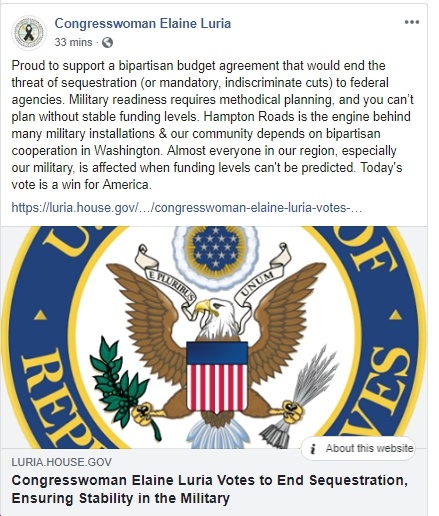 SCOTT STATEMENT ON HOUSE PASSAGE OF BIPARTISAN BUDGET ACT OF 2019

WASHINGTON, D.C. – Congressman Bobby Scott (VA-03) issued the following statement after the House of Representatives passed H.R. 3877, the Bipartisan Budget Act of 2019, which prevents draconian, across-the-board spending cuts scheduled for FY2020 and FY2021. It also suspends the debt ceiling for the next two years.

“Eight years ago, congressional Republicans almost brought our country to the brink of fiscal calamity by playing a dangerous game of chicken with our nation’s debt ceiling. That Republican-created crisis was only averted by passing the Budget Control Act of 2011, which created the automatic across-the-board spending cuts commonly referred to as ‘sequestration.’ I voted against that bill because I knew it would force draconian cuts on investments in our country. It also did nothing to restrain Congress from enacting fiscally reckless tax cuts for the wealthy and big corporations, which is exactly what Congress did in 2013 and again in 2017.

“I voted for the Bipartisan Budget Act of 2019 because it lifts the last two years of the Budget Control Act’s spending caps, eliminates the threat of sequestration, and protects the full faith and credit of the United States by suspending the debt ceiling for two years. This budget agreement will ensure that we will be able to invest in our national security and in the health, financial security and well-being of the American people. This budget agreement will also help avoid another harmful government shutdown, which would be devastating for the nation’s economy, particularly in Hampton Roads. Passage of this bill is a clear repudiation of the harmful cuts proposed by President Trump in his FY 2020 budget. This is a good deal for the American people, and it is fitting that it was passed on the 200th day of the new Democratic majority in the House of Representatives. It highlights our majority’s commitment to fighting for the American people.”

Yesterday, the Congresswoman Voted Against Budget Legislation that Would Increase the U.S. National Debt by Nearly $2 Trillion & Slow Down Economic Growth

WASHINGTON, D.C. – U.S. Representative Abigail Spanberger today released the following statement after voting against a federal budget bill on the floor of the U.S. House.

“Yesterday, I voted against H.R. 3877, because it would add an estimated $1.5 to $2 trillion to our nation’s debt over the next 10 years. While our nation’s deficit and debt continue to mount—much in part due to the 2017 tax bill that substantially cut federal revenues and benefited large corporations to an outsized degree—I believe it is imperative that we, as a Congress and a country, commit to getting our financial house in order.

“We are currently responsible for the debt that will one day be our children’s and grandchildren’s to repay. In order to create opportunity and invest in policies that benefit the lives of Americans across our country, we need our nation’s fiscal health to be on stable ground. At a time when the economy is doing well, it is even more worrisome that we are increasing our deficit with no regard towards how to fix it.

“Congress has an obligation to take concrete steps to improve the handling of our budget. While we should always safeguard the full faith and credit of the United States, we must also work in a bipartisan way to pursue a clean debt ceiling bill, address the disparity between our revenues and spending as a proportion of our GDP, and build a pathway toward a balanced budget.”