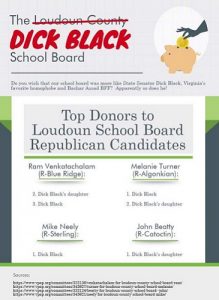 For two years, a much-needed update to Loudoun County Public Schools’ anti-discrimination policy, one that would include protection for LGBTQ staff and students, had been defeated 5-4 by the School Board thanks to knuckle-dragging conservatives Jeff Morse, Eric Hornberger, Debbie Rose, Jill Turgeon, and Eric DeKenipp. Despite the efforts of Loudoun students and advocates like Equality Loudoun, it appeared likely that we’d have to wait until we elected a new board to put these protections in place.

But in an unexpected turn of events, Eric DeKenipp resigned last November, and moderate Chris Croll was appointed to replace him. When the matter came up again in February, the School Board adopted Policy 1040 along the same lines as the previous votes, with Croll swinging the vote towards adoption. It was a huge victory for Loudoun’s LGBTQ and allied community, and is already making a difference in the lives of staff and students who now have legal protection from the discriminatory practices of school administrators.

Retiring Senator Dick Black (R-SD13), whose hate for the LGBT community is well documented, is pulling out all the stops to take those protections away. The plan is clear: Black intends to buy a School Board that will carry out his hateful agenda!

With the help of his daughter, Michelle Staton (who also happens to be the spouse of hate blogger Mick Staton), and www.parentandchildloudoun.org (which is associated with hate group Family Watch International), Dick Black is making a big play to restore discrimination in Loudoun. Here are four races he’s targeting:

Sterling
Democratic incumbent Brenda Sheridan has been a fierce advocate for LGBTQ rights in our public schools, and is a consistent voice for raising educator salaries, reducing class sizes, and especially equity for her district, which has the highest percentage of 1st generation Americans and is the most economically disadvantaged in Loudoun. These are some of the reasons that the Loudoun Education Association endorsed Brenda for the third straight time.

Her opponent was handpicked by hate-group operator Eugene Delgaudio. Not much is known about Neely, but when a candidate is recruited by Delgaudio, and his ONLY donor is Dick Black, you can bet that he passed their hate test. Promoting an event with Neely, Delgaudio said, “The homosexual lobby has taken over the Loudoun School system with a vote to place six foot males in with girls in the girls bathrooms and locker rooms by a five to 4 vote last week.” He’s following the Republican branding strategy, and given the fact that he has no record it just might work. But no matter how much they try to present him as a moderate, it’s almost certain that he will be voting against equality if elected.

Help keep the hate coalition out of Sterling by supporting Brenda. Every Single dollar and doorknock counts.

Catoctin
This is the district that flipped the Board’s vote. As I indicated in my piece on HD33, this is a tough district. Chris Croll never had intentions of serving beyond the duration of the term, although hate mail like this made her consider taking another run at it:

“I really question how much you care about people if you can wave off the butchery of breasts of confused young lesbians as collateral damage of your grand agenda.”

But she had made a promise to her family, so instead, Croll helped recruit an outstanding candidate: Zerell Johnson-Welch. Zerell is the former Chair of Loudoun’s Minority Student Achievement Advisory Council, and has been endorsed by both the Loudoun Democrats and the Loudoun Education Association. She’s running against John Beatty, whose top donor is Dick Black’s daughter Michelle Staton, followed by Ken Cuccinelli booster Robert Crnkovich.

Holding on to the Catoctin seat is crucial to protecting Loudoun staff and students. Although this is a tough district, Zerell has a good chance to win thanks to an independent candidate who is very popular with Republicans in the district. With Republicans splitting their vote, Zerell has a very good chance to secure a plurality, but she needs help, so please support Zerell Johnson-Welch.

Algonkian
The district that covers northern Sterling and overlaps with Senator Barbara Favola’s district has had a pair of very conservative elected officials representing it the past few years, despite being one of the most reliably blue districts for every other level of government. Supervisor Suzanne Volpe is a well-known far-right extremist, but the lesser-known Debbie Rose has proven to be a staunch anti-LGBTQ elected as well, and most observers will tell you that when Policy 1040 finally passed, Rose was clearly the most hostile School Board member in the room that night.

But with Rose deciding not to run again, Republicans went out and found someone to carry on Rose’s legacy in Melanie Turner. Another Eugene Delgaudio recruit, Turner had Dick Black introduce her at a fundraiser a couple days ago. One attendee had this to say about it:

“His speech was so hate filled against those he would call subject to ‘deviant behaviors’ I had to leave. It was virulently homophobic, and everyone in attendance seemed to agree with his position.”

Including Melanie Turner, I’m sure, who certainly had no trouble accepting a combined $1,775 from Dick Black and his daughter.

The Democratic candidate, Atoosa Reaser, is another former officer of the Minority Student Achievement Advisory Council and recipient of the LEA endorsement. More to the point, Atoosa is a fighter who will take it to Melanie Turner every step of the way. Help her get the message out so that the Democratic voters in Algonkian know the truth about the candidates running for School Board.

Blue Ridge
Ram Venkatachalam has run consistently as a moderate. By most accounts, it seems to be who he is. So more than any other candidate on this list, it’s really interesting to see that he took $1,685 combined from Dick Black and his daughter. It makes you wonder what he promised to do in return.

He’ll face Democrat Ian Serotkin. Ian is a solid, down-to-earth candidate who made a name for himself in Loudoun by being a vocal advocate for more recess. Endorsed by the LEA, Ian is committed to making sure educators can afford to live in the county where they teach and support our schools, and can be counted on to protect Loudoun’s students from the bullies and bigots. Give to Ian today.