If you’ve paid attention to Virginia politics at all, you’ve almost certainly heard the phrase “Virginia Way,” usually referred to in a positive, proud, even loving way by Virginia politicians. The only problem, of course, is that the “Virginia Way” is nothing whatsoever to be proud of. Quite the contrary.

As Jeff Thomas, author of Virginia Politics & Government in a New Century: The Price of Power, has written (bolding added by me for emphasis):

“The Virginia Way, has, of course, always benefited corporations and aristocrats above all...Virginia is changing, but the political elites are still the descendants of the tobacco planters, the industrialists, and now, a government ‘of the businessmen, by the businessmen, for the businessmen‘…According to independent experts, Virginia government is unique, but not in the ways noted by people taken in by ‘Virginia Way’ mythology…Virginia ranked fifteith out of the fifty-one states plus D.C. on the health of its democracy, with F grades on ballot accessibility and state government representation, and a D– on political corruption…A 2012 survey by the nonprofit Center for Public Integrity, Public Radio International and Global Integrity on honest government in the states gave Virginia grades of ‘F’ for legislative accountability and campaign financing…The State Integrity Investigation ranked Virginia forty-seventh out of fifty in its corruption risk report card, earning an overall grade of F…Virginia politicians view wrongdoing, misjudgments, corruption, and contempt of democracy as aberrations from a self-referential enlightenment journey in which they are the heirs of Saint Jefferson. They ignore plain facts and evident consequences in service of a fraudulent ideology that, coincidentally, happens to benefit themselves and their donors primarily.”

Disgusting, huh? Yet this is what Virginia politicians wax rhapsodic about? Vomit

The latest barf-inducing example, which just popped up on VPAP, is the following – a $10k contribution from Mountain Valley Pipeline (MVP) to Gov. Northam’s PAC, “The Way Ahead”: 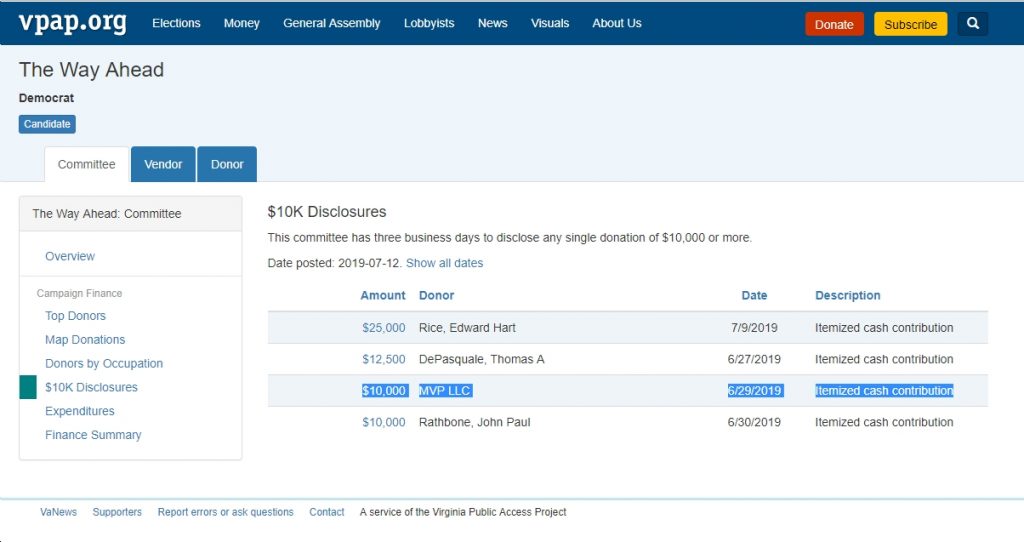 First of all, this is clearly NOT the “Way Ahead,” or least it shouldn’t be, except perhaps for Virginia’s wealthy, powerful, polluters and politically well-connected. Of course, even those wealthy, powerful, polluters and politically well-connected folks are still (last anyone checked) human beings living on planet Earth, which means that they are also vulnerable to the problems we all face, like having a habitable place to live. Yet in the case of the fossil fuel industry, such as the fracked-gas Mountain Valley Pipeline (MVP), note that they are actually *both* contributing to the ravages of the climate crisis and also putting themselves, along with their own children and grandchildren, at severe risk. Sadly, based on their behavior, they care a lot more about making money than about the future of life on our planet. In the case of the MVP, we’re talking about being responsible for “close to 90 million metric tons of greenhouse gas emissions annually, equivalent to 26 coal plants or 19 million vehicles on the road.” That’s a lot of greenhouse gas emissions, not even getting into all the other environmental damage fracking and pipelines do. In sum, the MVP is very, very bad for the vast majority of Virginians, and certainly nothing that Virginia policymakers should support.

More broadly, of course, it should not be legal for a corporation whose very business model comes with huge, negative public policy implications (in this case, fueling the climate crisis), to give money – let alone unlimited amounts of it! – to Virginia’s elected officials. Yet here were are, in the state of what I’ve heard called “legalized corruption,” and it’s totally legal – even if absolutely shouldn’t be legal – for the MVP fracked-gas pipeline folks to give $10k (or any other amount) to the governor of Virginia.

The thing is, Gov. Northam – and Gov. McAuliffe before him – might have reasons they think are legitimate to support major new fossil fuel infrastructure, even if it’s environmentally and economically a complete cluster@#$!. To be clear, I can’t think of any legitimate reasons to support this crap, and the science is crystal clear that we need to stop building new fossil fuel infrastructure IMMEDIATELY. But I suppose it’s *theoretically* possible Northam, McAuliffe, etc. have convinced themselves that they’ve got legitimate reasons to go against the overwhelming scientific evidence. Or…it’s possible that they are, to be blunt, bought-and-paid-for tools of fossil fuel interests. I mean, it sure smells fishy when the same corporate interests that stand to gain from a major new fossil fuel project also, just *purely* coincidentally I’m sure (heh), give shit-tons of money to Virginia politicians (e.g., MVP’s parent company, EQT, has given $626k over the years to House Republicans, Senate Republicans, Ed Gillespie, Terry Kilgore, Terry McAuliffe…). At the minimum, this should at least raise the *appearance* of impropriety. In this case, it sure looks and smells like a “quid pro quo” to me. The “quid,” of course, is the campaign contributions. And the “quo” is support – or at least taking no action to use Virginia’s authority to rein in and/or stop the pipeline(s) – for projects like the MVP, Dominion Energy’s Atlantic Coast Pipeline, etc.

Does any of this make you want to sing the praises of the “Virginia Way?” Personally, I’m with Jeff Thomas on this one, namely that far from being evidence of the Old Dominion’s virtues, the “Virginia Way” is actually much closer to a cesspool of (legalized) corruption, the epitome of the infamous “revolving door” between government and wealthy/powerful corporations that donate to Virginia politicians. Which raises the question, will anyone ever break with the “Virginia Way?” Will we ever have a progressive leader like “Howlin’ Henry” Howell again? And last but not least, if Democrats take back control of the Virginia General Assembly this November, will they reform and/or kill the “Virginia Way,” or will they let it continue on its not-at-all merry way? I think we all know what the answer to that question *should* be.