UPDATED 3:45 pm – See below for photos and a description of arrests being made.

UPDATED 10:35 am – See below the post for live video of pipeline fighters walking to Mountain Valley Pipeline work site on Cove Hollow Rd near Elliston, VA.
************

See below for information, courtesy of Appalachians Against Pipelines, on the latest debacle with the Mountain Valley Pipeline (MVP) – this one yesterday on Yellow Finch Lane in Elliston (Montgomery County), Virginia. As Jonathan Sokolow writes, “MVP is gonna kill someone before this is done.” The question is, will it take someone getting killed to prompt Virginia regulatory authorities to step in and deal with this situation? Or maybe the large sums of $$$ that Mountain Valley Pipeline LLC donates to the powers-that-be will mean that those powers won’t *ever* do anything? This is the home of the slimy “Virginia Way,” after all.

BREAKING! MVP has flipped an excavator above Yellow Finch Lane and knocked a huge tree stump off the ROW nearly hitting several bystanders monitoring construction. This company needs to be SHUT DOWN!!! Bystanders are shook up but ok. Excavator operator is banged up but ok. MVP CONTINUED TO WORK UNDER THE WATCHFUL EYE OF STATE POLICE AND MVP SECURITY AFTER PEOPLE WERE ALMOST KILLED!

Updates from Yellow Finch, where MVP work is encroaching DANGEROUSLY on the tree sits.

As MVP continued work clearing the easement, they dislodged a stump/root ball high up the slope, which fell quickly down the hill towards our supporters. This rolled off the easement, and across the road at the bottom of the hill. If pipeline fighters hadn’t been as quick as they were, many people would have been seriously injured!

The picture of this root ball shows two folks for scale. It’s huge!

Just after that, MVP tipped an excavator on the same slope, the second excavator to flip this week. It appears that the worker who was in the excavator is OK. This continues the ongoing trend of MVP exhibiting a lack of concern for the safety of both nearby individuals and their own workers and exhibiting the obvious fact that this pipeline CANNOT be constructed in a safe manner.

Please come out and bear witness to MVP’s destruction, the more people on site the safer everyone is. Your presence is valuable. 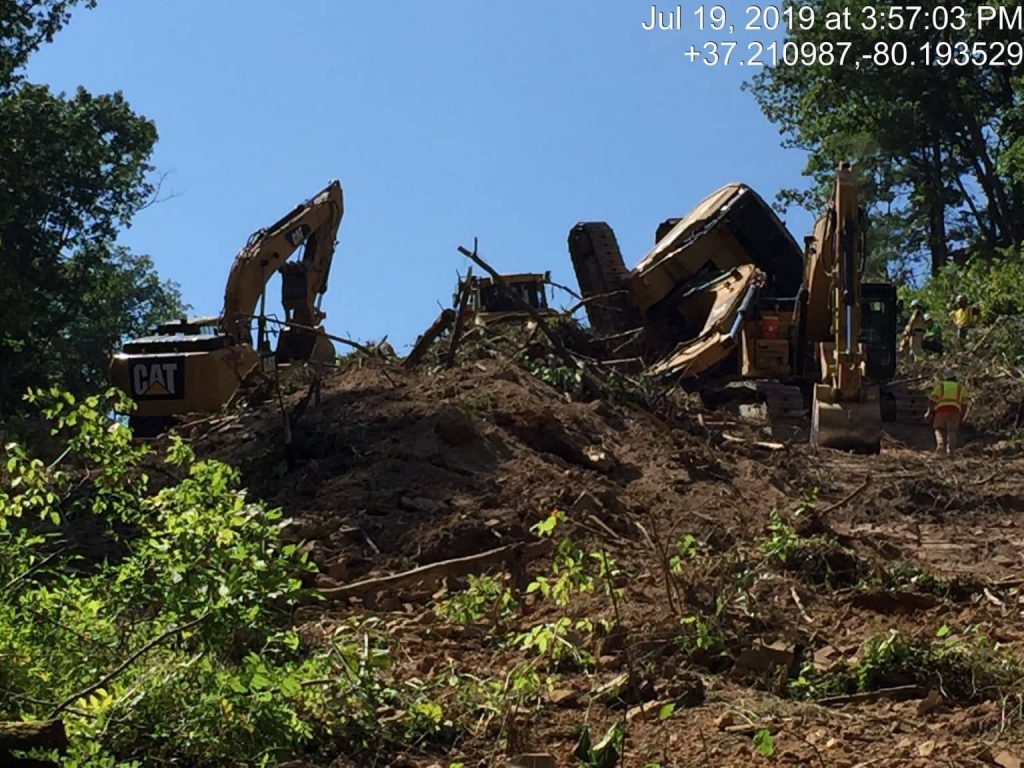 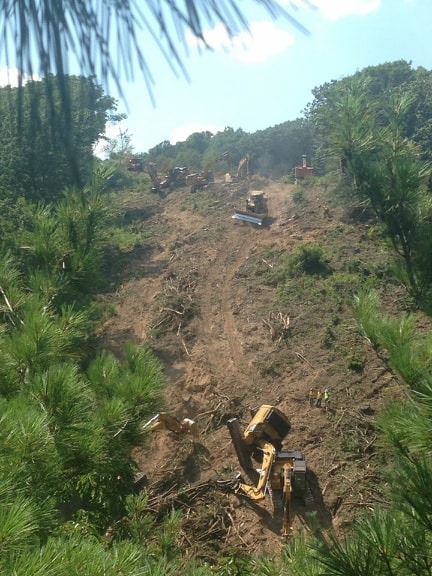 From Appalachians Against Pipelines:

3 people were just aggressively arrested at the Yellow Finch tree sits!! Yet another display of law enforcement working for the pipeline company!! Today is DAY 319 and the sits are still standing.

HELP US fight this pipeline, and this state repression! Support the folks who were arrested today & ongoing resistance: bit.ly/supportmvpresistance

This morning, dozens of peaceful protesters walked on to a Mountain Valley Pipeline work site on Cove Hollow Road, stopping work for approximately an hour — they rallied, sang, and left around 10:45 am. After that action, cops swarmed to the nearby Yellow Finch tree sit blockade en masse, immediately arresting 3 pipeline fighters.

A witness stated, “The cops pulled in, got out of their cars, straightened their belts, and then 4 to 5 cops tackled our friend in the road where she was taking pictures, entirely off the easement and out of the limit of disturbance.”

After that, 2 other folks were also arrested — at least one of them was also tackled.

Do you see how tight the cuffs are in this photo?