Last night, the Fairfax County Public School (FCPS) Board held a work session (see video, below) on the issue of school boundaries. According to the FCPS Board agenda, the official topic for the evening was, “discussion on goals and prioritization of factors for boundary policy and review of Draft Policy 8130.” Sounds kinda snooze-inducing, huh?  Perhaps, but as you’ll see, it ended up getting fairly heated.

First, though, a tiny bit more intro, from Board member Pat Hynes, who explains in a comment over at Reston Now (bolding added by me for emphasis):

…We are updating a county-wide boundary policy that has not been updated for 30 years. No one is contemplating “breaking up the Langley school pyramid.” Langley HS only comes up in our boundary discussions because it has 500 empty seats and McLean HS, right next door, is so over-enrolled it now has 18 trailers out back. Moving the boundary between McLean HS and Langley HS has to be on the table as an option to relieve overcrowding at McLean, and it would not effect Langley HS in any other way. Boundary conversations are always difficult, so it’s especially important to get the facts right. I hope your interested readers will take the time to watch the video and review the underlying documents, all of which are available on the FCPS web site.

So what went down last night? As Reston Now reports, and as you can see in the following video, the room was packed with protesters last night, holding signs like “Save Our Schools/No Boundary Change”; “Change the School Board, not the Boundaries”; “We Won’t Go Away”; ““; “We Are Watching You”; etc.

Why were so many people there on a Monday evening in the middle of the dog days of summer for a School Board work session, and what were they so worked up about? For starters, parents unsurprisingly – and understandably – care a lot about school boundaries. In addition, though, it’s worth noting that Republican-endorsed candidates for Fairfax County School Board have been burning up social media with sensational claims about what’s going on here. For instance, Republican-endorsed at-large candidate Vincent Palathingal, posted this screed, which among other things claimed that (supposedly):

With over-the-top, highly misleading/inaccurate language like that floating around Republican circles, it’s not surprising that so many people showed up last night to protest. In reality, meanwhile, is that – as Pat Hynes explained in a public Facebook post – the goal of last night’s meeting was NOT “to institute 70s-era busing and bankrupt homeowners,” but to hold its “fourth meeting…to discuss the boundary policy…part of an overall strategy to address growth in the county and overcrowding in several schools” and “to ensure equity and effectiveness when considering school boundaries.” Also, as Hynes pointed out, “Any potential boundary adjustment will be discussed and decided through a transparent process that engages the community.”

But yeah, obviously Republican incumbents (e.g., far-right Elizabeth Schultz, who is in serious danger of losing her seat to Democrat Laura Jane Cohen this November) and candidates for School Board are trying to rile up their voters for the election in 105 days. And this is the result, as you can see in the following video. These days, in Trump’s America, it’s sad…but also sadly unsurprising.

P.S. Almost forgot to mention Elizabeth Schultz’s comments last night: “I don’t understand what fair and just is” and “I don’t believe that we should treat everybody the same, as one.”

UPDATE: Robert Norris Rigby of FCPS Pride posted the following, which he encouraged me to share, along with Pat Hynes’ response. As Rigby says: “Palathingal is trying to wrastle up votes with the manufactured claim that FCPS is planning on ‘bussing (sic)’ students, and by attacking my friend Pat Hynes. Incumbent Republican school board member and candidate for re-election in the Springfield District Elizabeth Schultz is appealing to white grievance with the claim that FCPS will be ‘targeting students based on the color of their skin.'” Ugh. 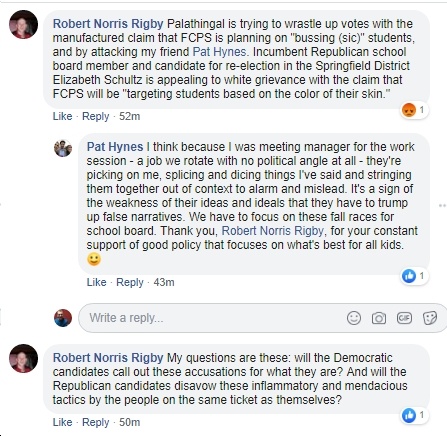