If you’ve been to the Chesapeake Democratic Committee’s website anytime over the past two weeks, you’ve been greeted with an incredible account of alleged malfeasance on the part of the Committee’s leadership. 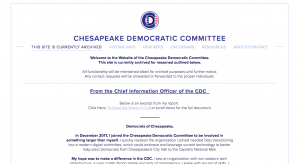 It seems Mr. Robert Stuart, Chief Information Officer of the Chesapeake Democrats, has been ousted from his position – and is now blowing the whistle, though few outside of Chesapeake seem to have heard it.

Mr. Stuart has also written a 38 page report documenting his allegations and experiences with the Committee. If you’re involved in Democratic politics in Hampton Roads, I suggest you read the entire report. Aside from the importance of understanding the (potentially criminal) allegations, pages 6-9 of the report may give local committees ideas about how to improve their own operations for the better.

You can find the full report here.

Page 1 tells the story of Mr. Stuart’s involvement in the Chesapeake Democratic Committee. It also alludes to illegality and provides the motivation behind the entire document. A key selection:

That night, upon reviewing the CDC’s Public Disclosure Filings, I was concerned that the CDC was incorrectly tracking and reporting Contributions to the CDC, specifically relating to the T-Shirts, CDC Breakfasts and possibly others.

Saturday, March 23rd, 2019, I brought these issues to the attention of the Elected Officers via email, hoping to resolve the discrepancies, and offered my assistance in finding solutions to what I believed, at the time, to be honest mistakes.

Sunday, March 24th, 2019, after being repeatedly ordered around and accused of “dissension” by the Election Chair, I informed her that I was unwilling to do anything illegal with Votebuilder on her orders and that it was inappropriate for her to maintain a Personal Email List, to which she had added my email, along with those of CDC Members and Poll Workers, all without consent.

The troubling responses by the Elected Officers and Committee Chairs to the aforementioned concerns, has prompted me to write this report for the General Committee.”

Pages 6-9 comprise what’s essentially Mr. Stuart’s resume with the committee. This is where you may find ideas about how to improve your own committees.

Pages 11-15 cover “Enumerated Incidents with the Appearance of Impropriety.” A few selections:

“The Election Chair solicits for CDC Poll Workers and refuses to share any emails she collects with any other CDC Committee or the CDC itself. Instead, she adds them to her own 600+ “Ches Dem Network” email list and passes them to selected campaigns.”

“The Elected Officers refused to address whether the Federal EIN (Employer Identification Number) is valid. This EIN is used on the CDC Bank Account and for Online Credit Card Processing. The current EIN returns no results in any Federal Database: IRS, SEC, FEC etc. Concerns that the organization was not operating under a valid EIN were ignored.”

Pages 23-38 cover the appendices and provide evidence for many of the preceding claims.