In previous posts, I’ve shared here two examples of the ad campaign I am running against my opponent, Republican incumbent Senator Mark Obenshain, in the major newspapers of SD-26.

The theme of these ads is “Who is Mark Obenshain Serving?”– because in each case it is not the people of the district he’s supposed to be representing. It’s not even the people who have been supporting him, i.e. the Republican voters of this very red district. I’m going after those voters by calling attention to the Republican con job on issue after issue, in which people like Obenshain are deceiving the people in order to serve the Big Money.

One of the ads I’ve shared here had the headline, “Who is Mark Obenshain Serving — The Issue of the Livable Wage.” It contains a short essay attacking Obenshain’s record of trying keeping the minimum wage low in Virginia.

Another ad, presented here previously under the rubric “Calling [Obenshain] Out on His con,” attacks Obenshain’s record of trying to block hundreds of thousands of Virginians from getting the decent and affordable health care they need.

Today I’d like to show readers here a new ad, also running in both the Daily News Record (Harrisonburg) and the Northern Virginia Daily (the northern part of SD-26, Front Royal, Strasburg, Woodstock), that calls Obenshain out for his gross betrayal of the public trust on the subject of climate change.

Here’s that ad, bearing the headline “Who Is Mark Obenshain Serving — When It Comes to the Destabilization of Our Climate?” 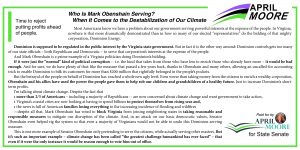 The purposes of this series of ads — and I will be sharing more of them here in the future — are 1) to pry as many Republicans as possible away from their habitual support of this typical Republican con man, Mark Obenshain, and 2) to move public consciousness on the issues away from the lies and toward a more grounded understanding of their true interests on each of these issues.

Running these ads, of course, takes money. And if you like the work we’re doing here in SD-26 to achieve those two purposes, I hope you will help support our effort.

Donations can be made here.