For those not familiar with  Rachel Bitecofer, I definitely recommend checking out her work. Bitecofer is “assistant director of the Wason Center for Public Policy at Christopher Newport University where she teaches classes on political behavior, campaigns, elections, and political analysis” and “conducts survey research on public policy issues and election campaigns.” Recently, Bitecofer forecast – using “the same prediction model  that accurately predicted Democratic gains in the House four months before the 2018 midterm elections” – that Democrats would re-take the White House in November.

There’s a profile piece on Bitecofer in Salon right now, and I definitely recommend reading it. A few key points jumped out at me:

I agree with all of that, including that here in Virginia in this “odd-off” election year, the key is motivating Democratic “presidential-only,” “federal” and/or “gubernatorial year” voters to show up at the polls on November 5. And what better to motivate them than tapping into their “Trump angst?”

I had a Twitter exchange (see screen shots, below) with Bitecofer this morning, which I thought was worth sharing. In summary, Bitecofer argues that the key to Democrats winning while Trump is in the White House are: 1) tapping into anti-Trump sentiment; 2) “run[ning] as a Democrat & mak[ing] a + case for liberalism NOT as an embarrassed Democrat bc voters hate weakness…[and because] you WILL be depressing your own turnout”; 3) nationalize the Virginia General Assembly races by making Trump a key part of Dems’ 2019 strategy, in “a cycle that is wholly determined by turnout” and “with control of both chambers of the Assembly at stake.”

Now, to me, this seems like a super-obvious “no brainer.” But, according to Bitecofer, she actually had “a campaign manager in a competitive race” tell her that “Ds are thinking about not making Trump a part of their 2019 strategy in VA.” I hope that’s not the case, because by far and away the biggest motivator for Democrats – to volunteer, to donate, to vote – right now is fear and anger about Trump. Which, in turn, means that the key to getting Democrats out to the polls in big numbers on November 5 is making sure that they believe, in their minds and in their guts, that voting Democratic for Virginia General Assembly (and local offices) on November 5 is a way to fight back against Trump/Trumpism and the disaster Trump Republicans are inflicting on our country.

Yes, to an extent Democrats don’t have to push that, because it’s already “baked in,” but my bet – and Bitecofer’s, clearly – is that there are many, many Democratic voters who need motivation to show up and vote on November 5. And for Democrats right now, given their utter loathing of Trump, it’s hard to comprehend why Democratic campaigns wouldn’t make that one of their central messaging pieces (along with other crucial issues, like climate, health care, gun violence, etc.).

P.S. By the way, Bitecofer also tweeted that her analysis/forecast for the November 5 elections will be coming out on September 5. Bitecofer says that “control of BOTH chambers of the state’s General Assembly hang on just 2 seats in each chamber.” Should be interesting! 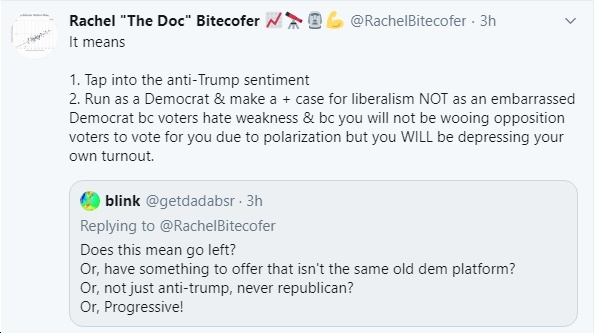 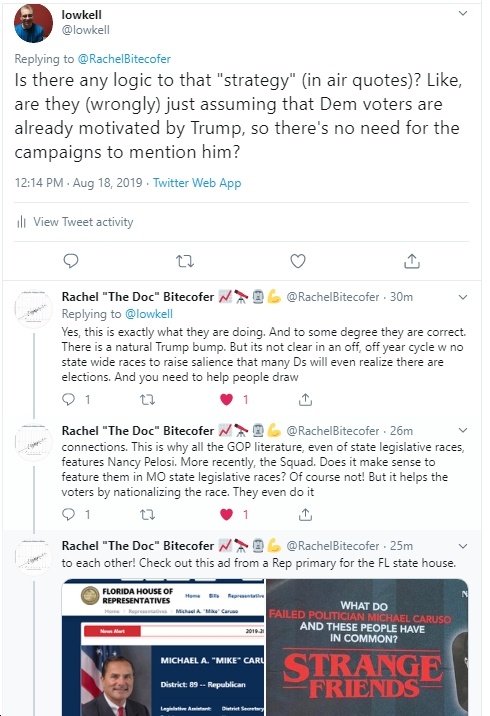