Virginia Del. Tim Hugo (R-HD40) nearly lost his seat in 2017 to Democrat Donte Tanner (Hugo hung on by 99 votes) and clearly now is feeling a lot of heat from Democratic nominee Dan Helmer, in a Fairfax/Prince William County district that went 55%-44% for Ralph Northam in 2017 and 59%-40% for Tim Kaine in 2018. For good reason, it seems that Hugo is very worried, as evidenced by how much money he’s raised…and also by a new website he’s put up (I’m not linking to it) to slime Dan Helmer.

Check out the above screenshot (click to enlarge), with Helmer, who is Jewish and the grandson of Holocaust survivors, holding a bunch of $100 bills. What on earth is *that* all about?!? Because Helmer wants to fully fund Metro and expand healthcare coverage, Hugo puts a bunch of “Benjamins” in Helmer’s hands? What is Hugo trying to imply exactly? That Helmer personally is going to be getting a cut of the money going to healthcare coverage, Metro, etc? Obviously, that’s absurd, so we can rule that out. What else could Hugo possibly be getting at here?

Here’s what Del. Marcus Simon (D-HD53), who is also Jewish, has to say about this image:

“Whether intentional or not – Tim Hugo should know better. Copying the ugly and divisive Trump playbook is never a good look.”

So yeah, I guess we don’t know for sure whether or not Hugo intentionally or unintentionally used an anti-Semitic trope, or what’s in Hugo’s heart. But, sadly, Hugo’s imagery follows in a long line of Republicans using anti-Semitic tropes. See below for some examples over the past few years, and also see Republicans attack Jewish candidates across the U.S. with an age-old caricature: Fistfuls of cash and GOP ads target Jewish candidates with anti-Semitic tropes. When you take the image by the Hugo folks in this context, it definitely seems similar (in particular, check out the first four, all of which have images of Jewish candidates with $$$ in their hands). Kinda makes you wonder where the Hugo folks got the idea for their image… 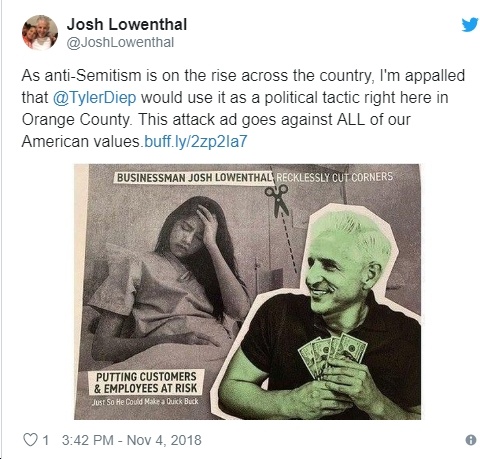 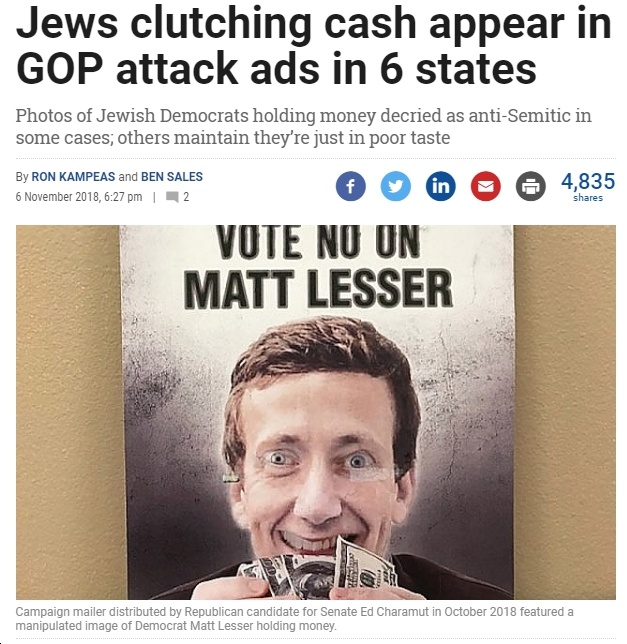 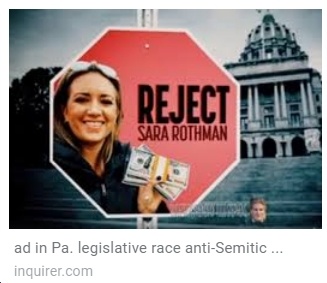 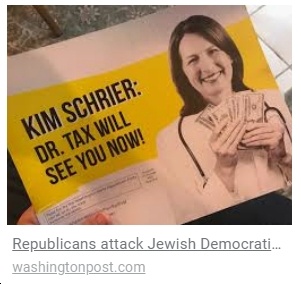 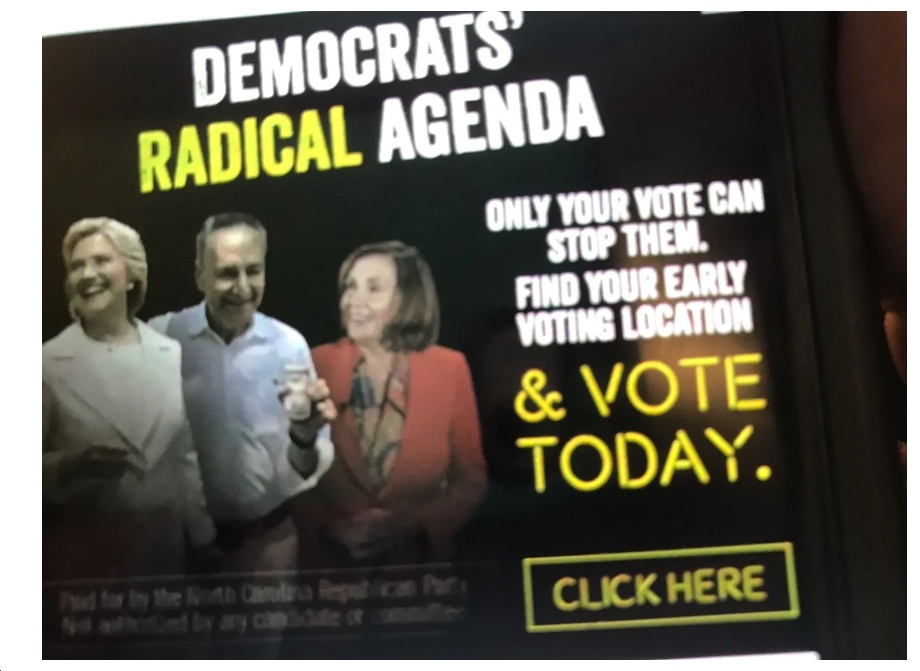 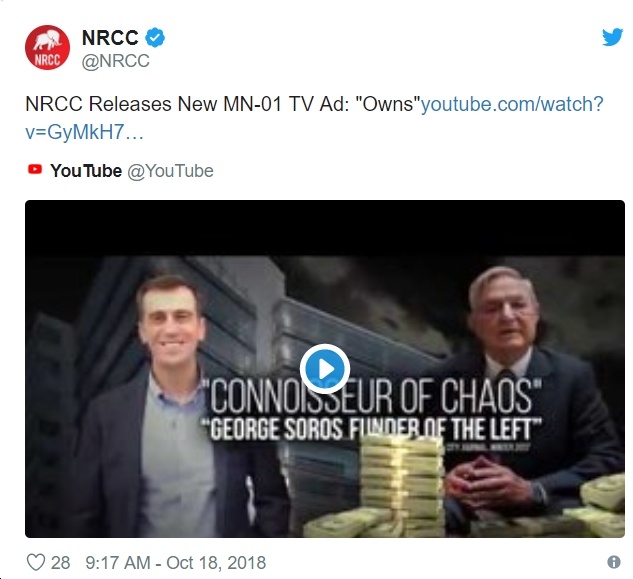 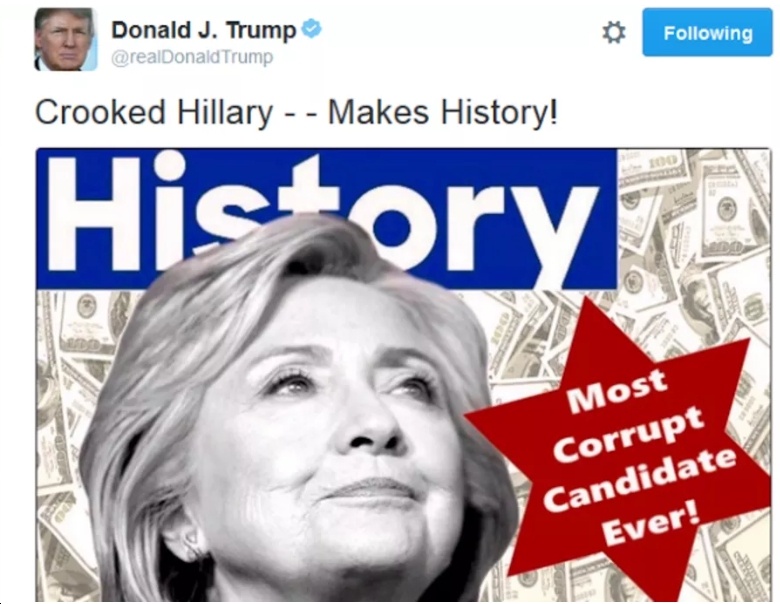 P.S. For some background on Hugo, see Tim Hugo Puts the F-I-X in Fairfax Judicial Nominations; Virginia’s Patron of Predatory Lenders, “Title Max Tim” Hugo (R-40), Has Got to Go; Anti-Transit, “Anti-Tax Hard-Liner” Del. Tim Hugo (R) Draws Small Crowd to Kickoff in District Tim Kaine Won by 18 Points in 2018; Godawful Del. Tim Hugo (R) Bill Would Screw Arlington, Lavish Big $$$ on Super-Rich People, Weaken Local Autonomy vs State AND Set a Horrible Precedent – VETO!; VA Dems Chair: “Whenever you’re stuck in traffic, don’t get mad at the cars in front of you. Get mad at Tim Hugo.”; etc. In sum, Hugo’s one of the worst members of the Virginia House of Delegates, and most definitely needs to be defeated this November 5, by Democrat Dan Helmer.