First Amanda Chase (R, SD-11) nearly deals herself a “Go Directly to Jail” card with her fat-shaming racism-tinged altercation with Capitol Police.  Then, in a perverse interpretation of “sisterhood is powerful,” she blames unarmed rape victims for being rape victims. And then she just about shoots herself in the foot defending a gun ad that borders on a call to violence (read lowkell’s excellent coverage).

Chase is citing this 2017 RTD article by Vanessa Remmers as her proof.  The article, however, shows that Leonard is following the law. He is notifying ICE when an undocumented detainee is going to be released, but is refusing to detain that person for an extra 48 hours as ICE (and the Trump Administration) would like him to do.

“They know it is illegal yet they insist I do it,” Leonard said of ICE. “They, ICE, want me to violate constitutional rights to make it easier for them to pick people up, but they would not be the ones being sued.” (from RTD article by Vanessa Remmers, June 14, 2017) 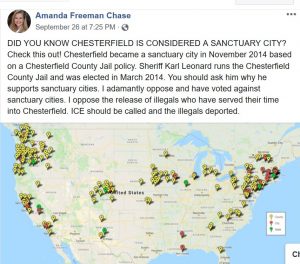 But wait!  There’s more.  Chase took another long pull and is insinuating on her Facebook page that Leonard has illegally used workforce inmates to repair damage to his home after Hurricane Isabel, something he flatly denies, pointing to the fact that he was a) not Sheriff; b) not in the country, but serving in the Middle East, at the time of Isabel (2003). 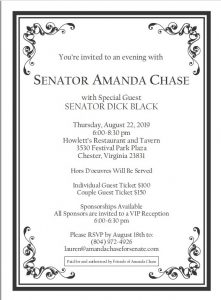 fringey for suburban Republicans, let’s recall her alliances with Sen. Dick Black, whose praise for war criminal Bashar al-Assad was picked up by Russia propaganda machine RT here and here (among other YouTube postings) and Philip “Gunimals” Van Cleave, President of the extremist gun group, Virginia Citizens Defense League (Chase has a 100% rating from them).  You can see his hilarious/scary take-down by Sacha Baron Cohen HERE. 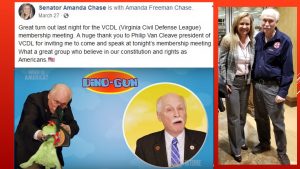 So, please do take advantage of VA 7th for Progress’s matching fund opportunity and donate to the GOOD Amanda – Amanda Pohl!  Chase is close to chasing herself out of office, but nothing is certain!  Let’s make sure Amanda Pohl has the resources she needs to fight the good fight for the everyone in Senate District 11! 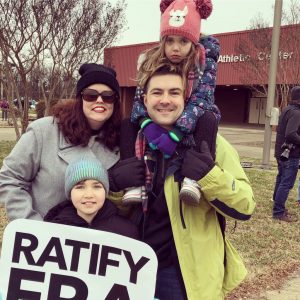