When I went to look at my mail this weekend, one strange piece stood out: a plain white envelope with an address label with my name and address printed, and no return address. It looked just like the kind of thing a blackmailer would send you. Inside, I found this: 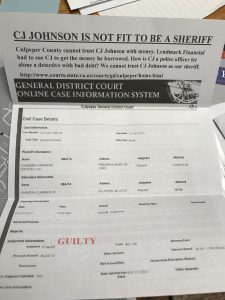 Nothing else. There’s no disclaimer, and no statement reflecting who paid for or authorized this campaign material. Virginia is a funny place–it’s often called the Wild West because of our lax campaign finance laws, but here’s one area where we actually do have explicit laws forbidding this.

It’s illegal for a person or PAC to sponsor a print media ad unless it includes the disclaimer “Paid for by _____ [Name of person or PAC].” And if the ad clearly supports or opposes any identified candidate, the sponsor must state whether it is authorized by a candidate.

Interestingly enough, I don’t live in CJ Johnson‘s district, and can’t even vote in this election. So why am I receiving this trashy, illegal hit piece? Well, because I made a small donation to CJ’s campaign. Clearly, whoever created this mailer and paid to send it out, took the list of names and addresses of CJ’s donors from his campaign finance filings, and mailed this garbage to every one of them.

As for the content of this illegal mailer, it seems to be pointing out some debt of a few hundred dollars that CJ didn’t pay on time in 2016. This is no deal-breaker to me, when you consider that the incumbent sheriff has been routinely called out for bullying his staff (things are so bad that the poor deputies have multiple anonymous Facebook support groups); for taking first class extradition trips, to Las Vegas and San Diego, staying in expensive hotels and dining at pricy seafood restaurants; and for engaging in misconduct that led to wrongfully convicting a teenage boy. And that’s not even taking into account that he is one of only two sheriffs in the state that continues to work with ICE to deport people.

Talk about not fit to be a sheriff.

I can’t vote in this election, but I strongly encourage everyone in Culpeper to speak out against this illegal, unethical campaign tactic, and most of all, to show up November 5th and vote for CJ Johnson for Culpeper Sheriff. Lastly, if you received this piece of garbage in the mail too, you can report it to the Virginia Department of Elections by filling out the online form here.

VA01 Dem nominee @herb4virginia calls out the VA GOP on their continuing dishonesty...aka, LYING, this time with respect to extremist Rep. Rob Wittman (R-VA01) and his "nay" vote on the "PACT Act."

Two of the worst - extremists, insurrectionists, climate science deniers, bigots, you name it - members of Congress, Bob Good (R-VA05) and Ben Cline (R-VA06), both of whom badly need to be replaced. https://bluevirginia.us/2022/08/thursday-news-inflation-drops-to-zero-in-july-due-to-falling-gas-prices-trump-takes-the-fifth-the-gop-makes-its-choice-trump-yes-rule-of-law-no-virginian-pilot-daily-press-call-young#comment-5944797490